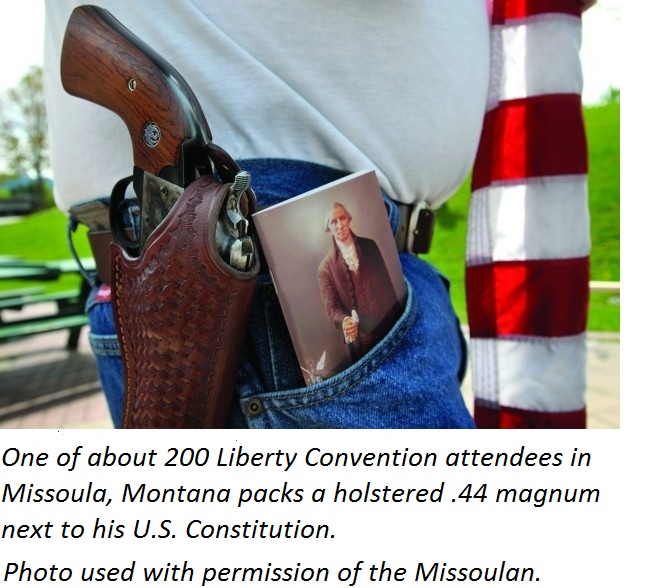 According to the new documents, FBI agents began investigating Cox following a series of speeches he gave in Montana in 2009 and 2010. During that period, Cox regularly spoke at Tea Party and militia gatherings in the western states.

Cox and several of his followers were arrested in March of this year. They're charged with federal weapons violations and state charges of conspiracy to commit murder, among other serious felonies.

During one speech in Montana on March 24, 2009, Cox informed the audience that his militia and others in Alaska had established their own court system, a “common law court,” whose authority superseded that of the official Alaska Court System.

(Common law courts are a hallmark of the violent, anti-government Sovereign Citizen movement; its adherents believe they are quite literally above the law.)

Cox told the Montana gathering that his group's common-law court was designed to supplant the Alaska and federal court systems, according to the court filing. It contains a partial transcript of Cox's speech, including his candid response when asked what sentence his court would hand down in the case of a convicted murderer.

... common law jurisprudence says that in the case of murder that person has forfeited their right, and at that point the victim can choose. If the pain they went through is so horrible if they want to spare other people the pain by deterring others, by putting that person to death, that's up to the victim or the victim's family. They can do that, and that person can be hung; or they can sell that person into slavery for the rest of their life. That person is owned by the person they violated, and they can sell him or they can kill him. And these concepts are right out of the Old Testament. That's where it comes from. Now, maybe people don't believe in the Bible, but you know what, that's all right, it's still plenty good for that. So we can at least agree on that. So that's where we're at. We haven't ventured into that; we're just still building, still building, you know. And I hope those don't come too quick but they might show up sooner than we like.

During the same speech, Cox boasted of commanding a 3,500-member militia with trained personnel, high-tech warfare gadgetry and weapons galore.

It [the Alaska Peacekeepers Militia] is not a rag-tag deal. I mean, we're set: we've got a medical unit that's got surgeons and doctors and medical trucks and mobile surgery units and stuff like that. We've got engineers that make GPS jammers, cell phone jammers, bombs, and all sorts of nifty stuff. We've got guys with, we've got airplanes with laser acquisition stuff and we've got rocket launchers and grenade launchers and claymores and machine guns and cavalry and we've got boats. It's all set."

A footnote that might be of interest to Cox or his lawyers: Machine guns, rocket launchers, grenade launchers and claymore mines are illegal to possess in the United States unless properly registered and licensed. According to the FBI, Cox was not authorized to posses such “nifty stuff.”

Although it's unclear from the court filing who exactly sponsored the Montana gathering where Cox made his speeches or who recorded his comments, it does report that several concerned citizens approached the FBI in Montana in 2010 to express their concern over Cox advocating violence and calling for the overthrow of the government.

During the time period in question, Cox made appearances in Montana, Colorado and northern Idaho. Notably, he participated in a two day Liberty Convention in Missoula, Montana on May 21 and 22, 2010.

There he appeared side-by-side with militia movement heroes including Chuck Baldwin, a fundamentalist Christian and Constitution Party leader; leading Oath Keepers member Sheriff Richard Mack, who challenged the Brady gun law and “preach[es]... the unassailable powers of county sheriffs and states” (Sovereign City ideology holds that county sheriffs are the highest constitutional law enforcement officers in the country); and tax resister Red Beckman, a notorious anti-Semite and the author of The Church Deceived, in which he claims the Holocaust was God's punishment of Jews for worshipping Satan.