Media outlets should be wary of the Judicial Crisis Network (JCN), which is launching a “seven figure” campaign urging senators to block any appointment by President Obama to replace Justice Antonin Scalia on the Supreme Court. JCN has given millions to Republican-aligned groups and has a history of misleading campaigns. The group was previously called the Judicial Confirmation Network and criticized “obstructionists” for not giving an “up or down vote” on a president's judicial nominations.

Daily Beast: “JCN Has Emerged As A Pipeline For Secret Money To Other, Better-Known Dark Money Groups.” Viveca Novak and Peter Stone wrote in The Daily Beast of JCN:

To expand its influence in state elections, JCN has emerged as a pipeline for secret money to other, better-known dark money groups like the Wisconsin Club for Growth and the American Future Fund which, in turn, have spent big bucks in state Supreme Court and AG races.

JCN heightened its focus on AG races last year when it pumped $1 million in secret money into the Republican Attorneys General Association, making it the third-biggest contributor to RAGA and helping the GOP pick up three new slots so that it now controls the majority of state AG posts.

JCN's pivotal part in the surge of spending on court elections has received scant attention. But in 2012, it dished out more than $2 million in court races in Michigan alone--half of that in a single down-ticket state circuit contest, according to the Michigan Campaign Finance Network. And over the last two years, the organization contributed a minimum of about $2 million to groups that were involved in 2014 state judicial elections and efforts to influence how judges are chosen. Recipients of JCN checks included the many-tentacled Republican State Leadership Committee, which for the first time invested in court races around the country, spending more on them than any other outside group. [The Daily Beast, 3/23/15]

Judicial Crisis Network Was Previously Named The Judicial Confirmation Network And Pushed Bush Judicial Nominees. The Judicial Crisis Network was founded during the George W. Bush administration and was originally named the Judicial Confirmation Network. It was founded to push through President Bush's far-right nominees and “support the confirmation of highly qualified individuals to the Supreme Court of the United States” and “ensure that the confirmation process for all judicial nominees is fair and that every nominee sent to the full Senate receives an up or down vote.” The group changed its name and mission after President Obama took office. It's current mission is to support “only highly qualified individuals who share” a vision of “limited government.” From a 2008 JCN ad: 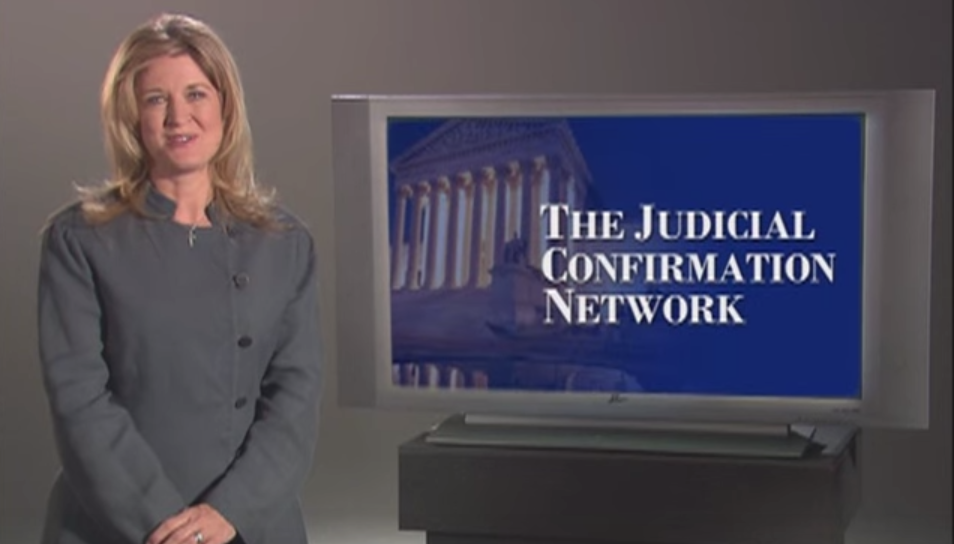 JCN Once Derided "'Obstructionists' For Blocking Votes On Bush Nominees." The Arkansas Democrat-Gazette reported of the group:

In 2005, the group was committed to speeding up the judicial selection process and denounced “obstructionists” for blocking votes on Bush nominees.

In a news release, Gary Marx, the group's executive director at the time, said, “Our message is simple, the people want the Senate to do its work and our petition will remind Senators that they have an obligation to bring these nominations to the floor for a fair vote.”

At a news conference, the group's legal counsel at the time, Wendy Long, said her organization had already started “grass-roots citizens efforts” in Arkansas and in five other “red states that have blue senators” to press for up-or-down votes on Bush judicial nominees.

By 2009, the group was organizing Arkansans to oppose Obama nominees, linking with representatives of the National Rifle Association, the Family Council, Arkansas Federalist Society and the Republican Party of Arkansas to oppose Sonia Sotomayor's nomination to the nation's high court. [Arkansas Democrat-Gazette, 2/19/16]

Daily Beast: “JCN's Modus Operandi And Battlegrounds Have Shifted -- Particularly Since Barack Obama Won The White House.” Viveca Novak and Peter Stone wrote in The Daily Beast that JCN “shifted” its operations when a Democrat took over the White House:

The Judicial Confirmation Network (JCN), set up as a 501(c)(4) “social welfare” group that doesn't disclose its donors, would prove to be a crucial player in drumming up support for Bush Supreme Court nominees John Roberts Jr. and Samuel Alito Jr. -- eventual allies for Scalia on the Court's right flank.

In the years since, JCN's modus operandi and battlegrounds have shifted -- particularly since Barack Obama won the White House, which prompted the group to sound the alarm and change its name to the Judicial Crisis Network. In the ensuing years, not only has it fought to block Obama's nominees to the high court, but it has spent millions to sway state judicial elections and attorneys general races, helping to uphold state laws backed by conservatives, nurture like-minded talent in the states, and advance pro-business, limited-government legal agendas aligned with its donors' leanings. [The Daily Beast, 3/23/15]

JCN Released An Ad Accusing Court Candidate Of Volunteering “To Help Free A Terrorist.” JCN reportedly spent roughly $1 million on an ad attacking Michigan Supreme Court candidate Bridget McCormack, who was backed by Democrats and went on to win the race. The ad features Michigan woman Teri Johnson, whose son was killed in Afghanistan, stating: “My son's a hero and fought to protect us. Bridget McCormack volunteered to help free a terrorist. How could you?” [YouTube.com, 10/30/12; Media Matters, 11/6/12; MLive.com, 10/30/12]

An ad paid for by the group with undisclosed donations shamelessly exploits the tragedy of the death of a young soldier in Afghanistan, Joseph Johnson - with the help of his mother, Teri. “My son is a hero and fought to protect us,” she says in the ad. “Bridget McCormack volunteered to help free a terrorist. How could you?”

That's easy to answer. She didn't. Ms. Johnson may not know that, but the Republican activists who paid for the ad surely do.

Ms. McCormack, a law professor at the University of Michigan, was part of a legal network called the Center for Constitutional rights, which coordinated efforts by American lawyers to represent Guantanamo detainees - most of whom were found to be improperly detained and released. Their goal was not to “free terrorists,” but to ensure that American prisoners were entitled to the rights and representation provided under international and American law. The Supreme Court affirmed those rights on more than one occasion.

The prisoner Ms. McCormack represented, Wahldof Abdul Mokit, was in fact released from Guantanamo in 2007 - by a military tribunal under a process created by the Bush administration - not by Ms. McCormack. He was sent back to his native Tajikistan, where he was arrested and sentenced for being a member of the Islamic Movement of Uzbekistan, which fought alongside the Taliban in Afghanistan. [NYTimes.com, 11/1/12]

Michigan Outlet: “Flagrant Foul” And “Cynical Manipulation.” The Center for Michigan's Bridge Magazine criticized JCN's ad as committing a “flagrant foul,” concluding that it is “a cynical manipulation of individually correct facts to create the most unflattering image of a candidate. ... The tone of the ad says far more about the people who funded and crafted it than it does about the candidate it tries to attack.” [MLive.com, 11/5/12]

Detroit Free Press Criticizes Ad: “Claim Ignores The U.S. Rule Of Law.” Detroit Free Press reporter Paul Egan criticized the ad in a piece headlined, “She tried to 'help free a terrorist'? Claim ignores the U.S. rule of law.” He added: “No crimes -- no matter how heinous -- should be attributed to attorneys who help assure that the constitutional and international legal rights of accused people are observed.” [Detroit Free Press, 11/4/12, via Nexis]

JCN's Suggestions About Voter ID Laws Are False. JCN is repeating frequent right-wing media claims in support of voter ID laws. In reality, there is no evidence of massive voter impersonation fraud that would result in “Illegal Immigrants Voting” and “Election Theft.” Furthermore, there are “mountains of evidence” that voter ID laws can be racially discriminatory and disenfranchise voters. [Media Matters, 10/30/14]

These assertions are based on the fact that in 2014, the Arkansas Supreme Court unanimously struck down a 2013 voter ID law narrowly passed by the legislature. All seven justices agreed the law was unconstitutional; evidently, the entire court was a hotbed of liberal activism.

This is foul stuff, even by the standards of outside spending in elections. Grotesquely distorting a candidate's record? Check. Demonizing immigrants? Check. Cynically injecting a dog whistle partisan issue into a judicial race? Check. Fabricating a linkage to Obama out of thin air? Check.

Arkansans might be surprised to learn that Goodson -- who is lately touting her endorsement from the National Rifle Association, an unusual occurrence in a judicial race -- is an activist liberal judge. [Arkansas Times, 2/16/16]

One of the mailings criticizes Goodson for her role in striking down the state's 2013 voter-ID law. The mailer also linked her to President Barack Obama's “Liberal Agenda” in Arkansas.

What the mailer from the Judiciary Crisis Network didn't mention is that the decision to strike down the state's voter-ID law was unanimous. Goodson was one of seven justices who all agreed that the 2013 voter-ID law amounted to another qualification on voting, and since such qualifications are set in the state constitution, the law was thus unconstitutional. [Arkansas Democrat-Gazette, 2/19/16]