Gateway Pundit Jim Hoft has further cemented his hold on the title of "Dumbest Man on the Internet." As Fire Dog Lake's TBogg reported, Hoft fell for a bogus story about a San Diego high school, which rescinded its commencement invitation to President Obama because students apparently discovered that his long-form birth certificate is a fake.

As TBogg reported, the article Hoft posted to his blog tonight came from a story in the San Diego Reader's satire section, appropriately called: “SD on the QT: Almost Factual News.”

As a contributor to the site points out, the column's title, "... on the QT," “announces itself in a loud stage whisper, the only way satire should ever indicate itself -- indirectly, in keeping with its production of figurative language and frequently, absurd analogy, as the aforementioned objects of fun should realize.” But even if these subtleties of satire are way over Hoft's head, he probably should have realized that something wasn't right when the post adjacent to the birth certificate story involved a red and white “Shamu” eating bin Laden to the tune of “America, Heck Yeah!”

Since the release of Obama's long-form birth certificate, right-wing media figures, including Hoft, have been embracing conspiracy theories that the document is fake or altered. Hoft, for example, has touted the theory from a “Photoshop expert” that the birth certificate is “such an obvious fake.”

This is not the first time Hoft has fallen for obvious satire. In March 2010, Hoft jumped on a report by the satire site EcoEnquirer.com that "[f]amed global warming activist James Schneider and a journalist friend were both found frozen to death on Saturday, about 90 miles from South Pole Station." Other EcoEnquirer.com stories included "Bali Global Warming Conference: 2027" and "EPA to Mandate Reductions in Emissions from Volcanoes." Hoft also touted a fake Facebook profile earlier this year in an attempt to link Obama to alleged Arizona gunman Jared Loughner. 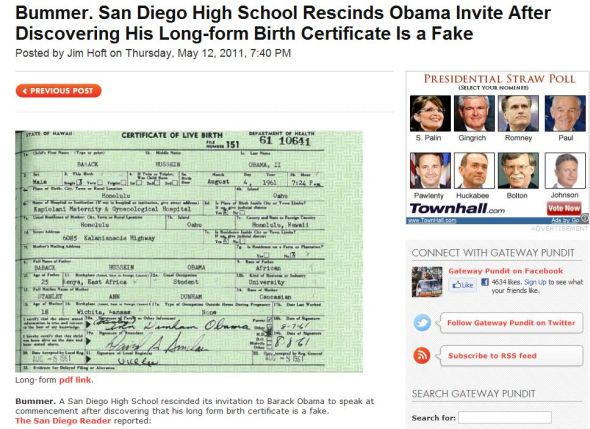