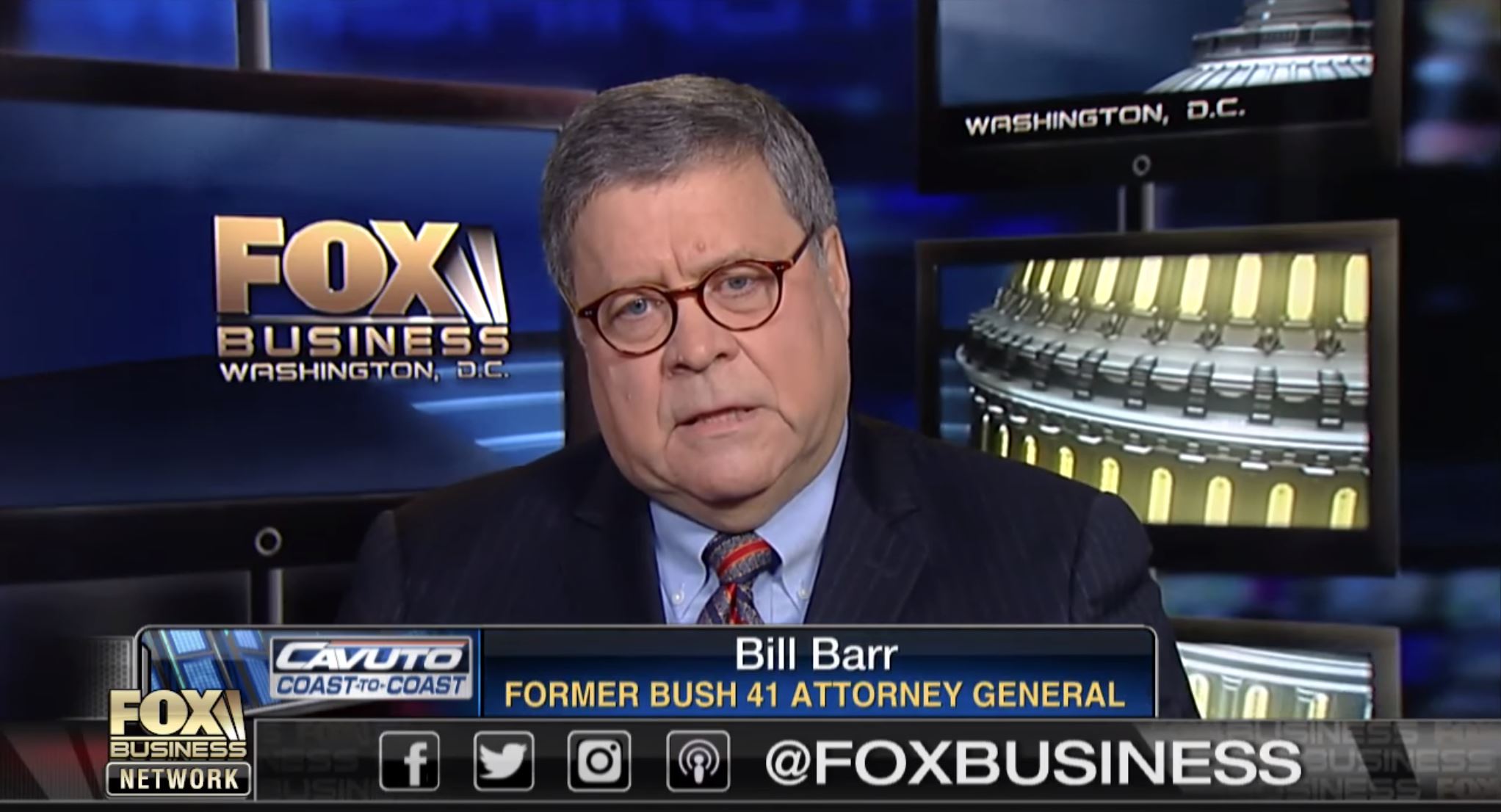 Update (12/7/18): Trump has announced that he will nominate Barr to be attorney general.

Fox News' leading propagandists have been begging for President Donald Trump to install an attorney general who will turn their conspiracy theories into federal investigations. With William P. Barr, the reported front-runner to fill the position, they may finally get their wish.

In a November 2017 meeting with Trump, Fox News host Jeanine Pirro reportedly savaged then-Attorney General Jeff Sessions for his failure to conduct a federal investigation into a deal approved while Hillary Clinton was secretary of state that gave Russia control over some U.S. uranium mines. Conservatives latched on to that deal during the 2016 presidential election, pushing a bogus conspiracy theory that Clinton approved Russia’s effort to buy Uranium One, a Canadian firm with licenses to extract uranium in the U.S., because she had benefited from Russian government bribes. Fox tried to divert attention from reporting about Trump’s Russia ties by devoting hours of airtime to the pseudoscandal in the weeks before Pirro’s White House meeting. Now, the Fox host was using direct access to the president to undermine the attorney general, calling for him to appoint a special counsel to scrutinize Clinton and trying to make a federal case out of right-wing bullshit.

Pirro’s rant reportedly agitated Trump, who became angry that Sessions was failing to act in his interests -- as if the attorney general were his personal lawyer. But Sessions largely weathered the harsh public criticism from the president and his Fox propagandists over the Uranium One case. He pointedly refused to appoint a special counsel, instead directing prosecutors to examine the issue to little effect.

But now Sessions is gone, canned by Trump after a drumbeat of attacks from Fox for that very unwillingness to use the Justice Department to punish the president’s enemies and his refusal to interfere in special counsel Robert Mueller’s probe of Russian interference in the 2016 election. And his reported likely replacement is already on the record supporting a Uranium One investigation.

Barr, who served as attorney general to President George H.W. Bush, is Trump’s “leading candidate” to return to that office, The Washington Post reported Thursday. In public statements made since Trump’s election, Barr has repeatedly suggested that he is much more willing than Sessions was to use law enforcement as a tool to enforce the president's will. That includes moving forward with a federal probe into the Uranium One deal.

In November 2017, after Sessions publicly declined to appoint a Uranium One special counsel, The New York Times reported that Barr “sees more basis for investigating the uranium deal than any supposed collusion between Mr. Trump and Russia.” He also defended Trump’s public calls for investigating his former political rival, complaining, “To the extent it is not pursuing these matters, the department is abdicating its responsibility.”

In a separate November interview with The Washington Post, Barr said, “I don't think all this stuff about throwing [Clinton] in jail or jumping to the conclusion that she should be prosecuted is appropriate, but I do think that there are things that should be investigated that haven't been investigated."

Barr has also echoed the effort by Trump and his Fox allies to delegitimize Mueller’s probe because some of his team members had Democratic ties. “In my view, prosecutors who make political contributions are identifying fairly strongly with a political party,” he told the Post in July 2017. “I would have liked to see him have more balance on this group.”

And in a May 12, 2017, op-ed for the Post, he defended Trump’s decision to terminate James Comey as FBI director. Barr agreed with the White House’s initial explanation for Comey’s removal -- that the firing was justified because Comey had usurped the authority of the attorney general by unilaterally announcing that Clinton should not be charged over her use of a private email server. He did not address Trump’s statement, offered on NBC the night before, that he actually fired Comey over his handling of the Russia probe.

If nominated and confirmed, Barr would replace acting Attorney General Matthew Whitaker, who had publicly mused about curtailing the Mueller probe.

Trump and his Fox supporters want an attorney general who shares their authoritarian view of the law as a constraint on the president’s enemies but not his allies. It seems unlikely that the president’s eventual pick won’t fit that bill -- and Barr's recent comments suggest he would.