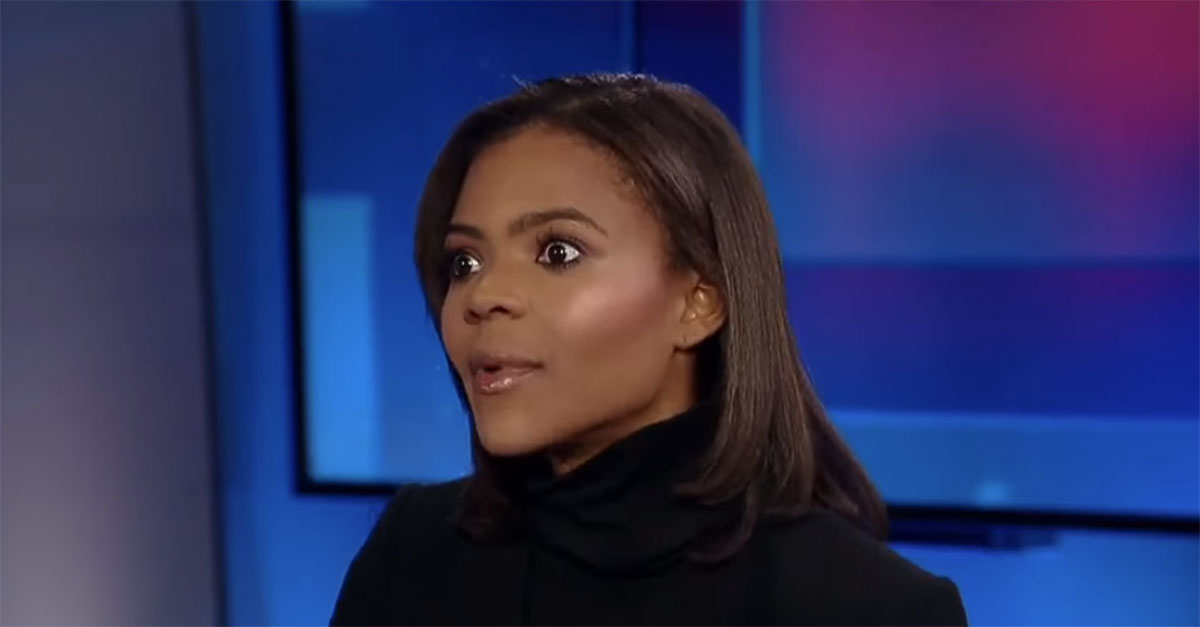 Candace Owens, communications director for Turning Points USA, attacked the #MeToo movement on Twitter on June 11, claiming that it treats women as “stupid, weak & inconsequential.” Owens, whose profile skyrocketed after rapper Kanye West promoted her brand of hot takes on Twitter,  also stated that #MeToo had “turned sexual assault into a trend,” an absurdity akin to claiming that fire alarms are turning fires into a trend. 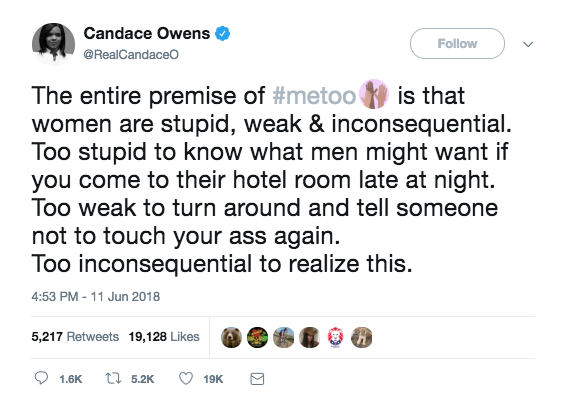 By elevating the voices of accusers, the #MeToo movement has been pivotal in spotlighting powerful figures who had gotten away with sexual misconduct and violence. Owens’ ignorant attack faced immediate criticism. Even conservative women, who typically espouse anti-feminist views, spoke out against it.

Kimberly Corban, a rape survivor and an NRATV favorite due to her pro-gun advocacy, said she disagreed with Owens and suggested they “get together” to talk: 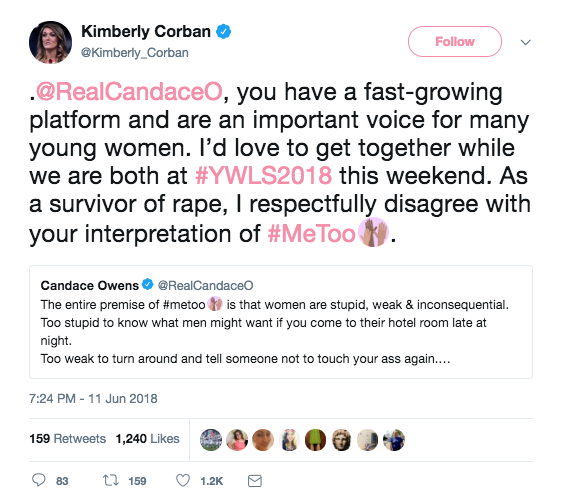 Corban also pointed out why Owens’ words could be damaging to survivors and victims, while explaining that #MeToo “isn’t a problem with women” but rather a problem that stems from a culture that forces victims into silence. 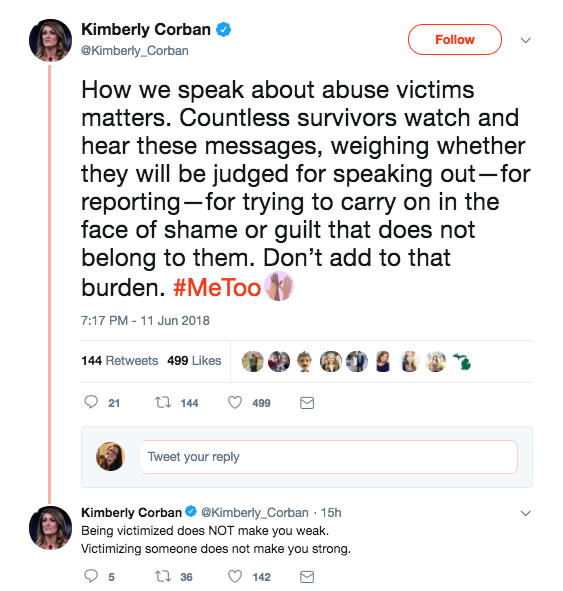 Amber Athey, a breaking news editor for The Daily Caller and a columnist for Catholic Vote, called Owens’ tweets “an ignorant take” and “ridiculously unfair”: 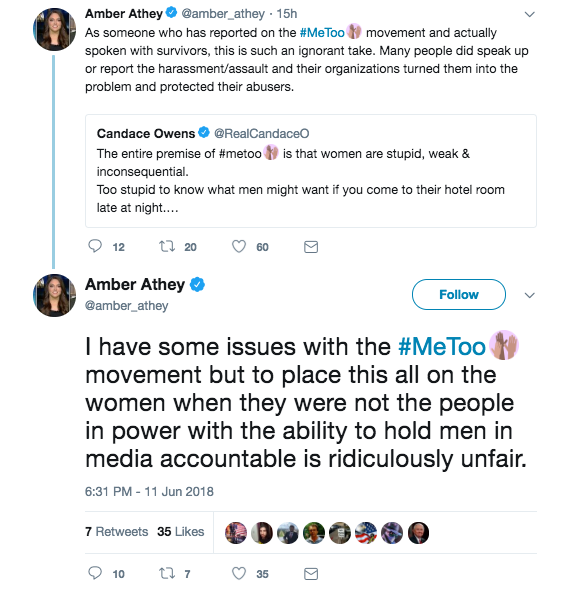 According to Athey, Owens’ cluelessness on #MeToo comes from taking “the conservative idea of personal responsibility” and warping and twisting it to “unimaginable levels.”

Rita Panahi, who works for the Herald Sun, a subsidiary of Rupert Murdoch’s News Corp Australia, and hosts The Friday Show at conservative network Sky News, responded to Owens that “blaming the victim for being victimised isn’t helpful”: 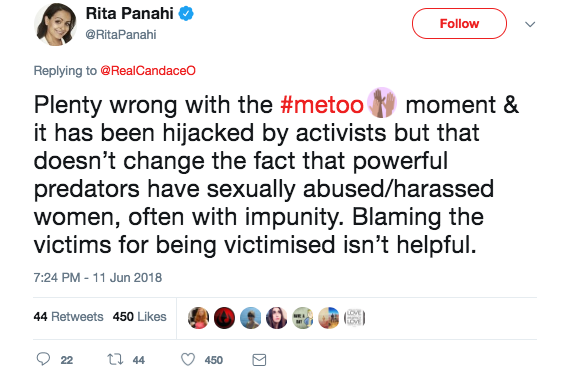 Cassandra Fairbanks, who writes for The Gateway Pundit, a conspiracy theory-friendly and error-filled outlet, called out Owens for her “bad tweet”: 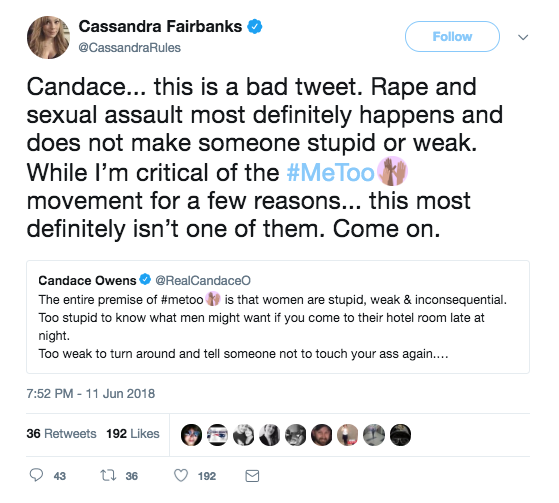 Some conservative men were also shocked by the ludicrous comments. Benji Backer, founder and president of the American Conservative Coalition, shared his own experiences of being subjected to sexual misconduct and called Owens’ attacks “abhorrent” as well as “asinine & cowardly”: 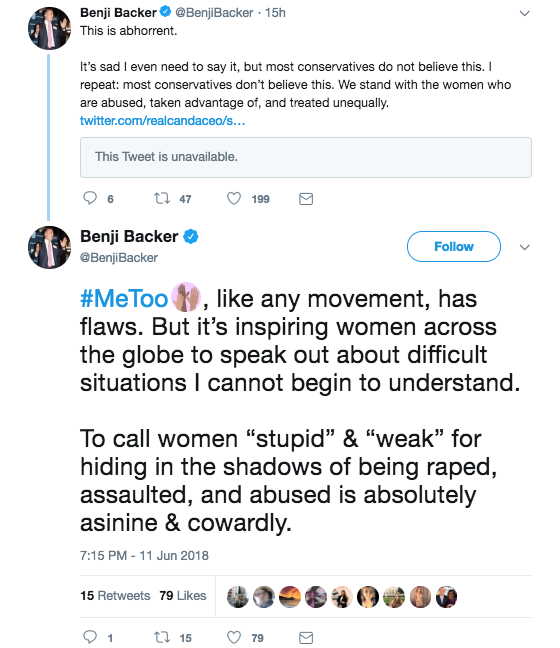 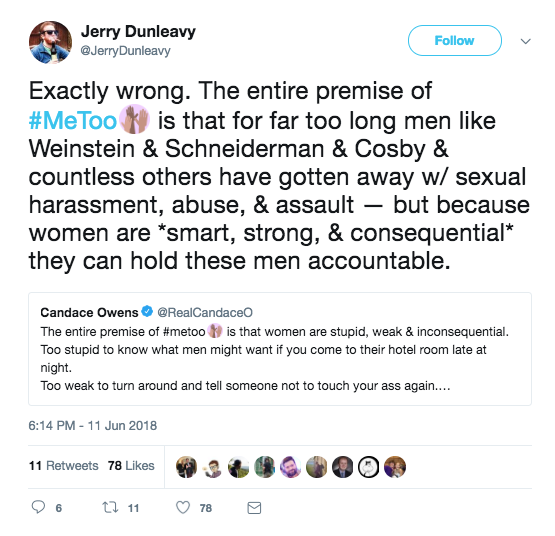 Caleb Hull, a senior editor at Independent Journal Review, suggested Owens “will do or say anything for the attention”: 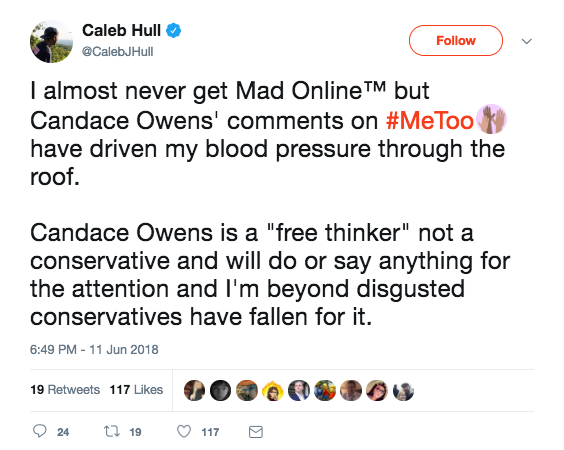 Hull might be onto something. Owens is slated to speak at Turning Point’s upcoming Young Women’s Leadership Summit in Dallas, TX. With her tweet, she was likely attempting to exploit a sensitive topic to draw more attention to her speech, in which she has promised to explain why she hates the #MeToo movement.

Owens’ skyrocketing ascent to conservative fame has, after all, always rested on wildly inaccurate assertions. She has claimed that police brutality is not an issue the Black community faces, blatantly dismissed the threats that white supremacy presents, and volleyed toxic, inaccurate attacks at the immigrant community, including claiming that undocumented immigrants are voting illegally and that they are “directly harming the black community” by taking jobs.

Kennedy Copeland, an advancement associate at Owens’ own Turning Points USA, attempted to distance the organization from Owens’ views after she tweeted about #MeToo, claiming to “respectfully disagree” with her statement. But given that TPUSA considers “grab them by the pussy” apologist Jeanine Pirro and enforced-monogamy supporter Jordan Peterson worthy ambassadors for its young women’s leadership summit, TPUSA’s views on women and victims of sexual violence and misconduct may actually be in lockstep with Owens’.

UPDATE: Following backlash, Candace Owens took to Periscope, calling #MeToo “a witch hunt on men” and blaming it for causing the men she speaks to refusing to hire women.

UPDATE (7:15 PM): On Twitter, Mediaite's Caleb Ecarma shared a leaked message in which TPUSA's executive director and founder Charlie Kirk asked fellow conservatives to refrain from critizising Owens or the organisation and to backchannel their disagreements to avoid hurting the group's image.

here's Charlie Kirk defending Candace Owens in a TPUSA GroupMe after she attacked victims of sexual misconduct. Kirk demanding that his activists “don't publicly go after allies” is pretty funny considering all his bitching about “groupthink” pic.twitter.com/if8HpKlAq3