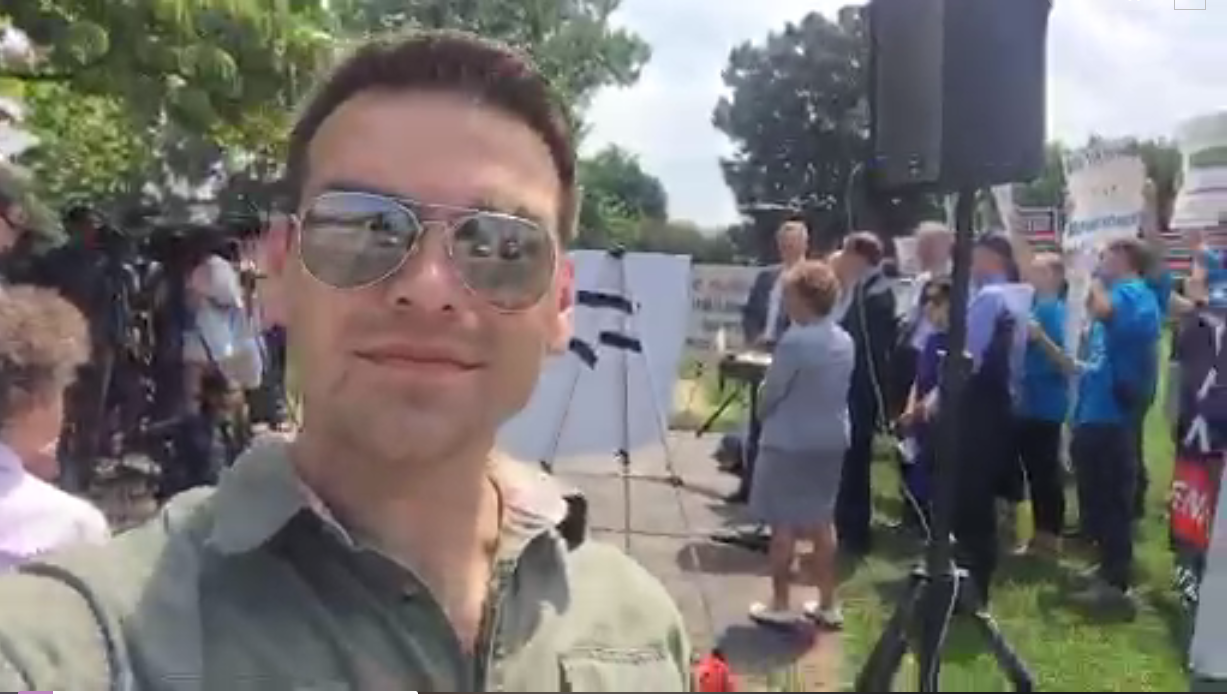 Internet troll Jack Posobiec appeared at a congressional press conference on net neutrality and demanded that the Democratic senators speaking at the event publicly say whether they disavowed “satanic” internet pornography. Although Posobiec failed to draw comments from the elected officials, the self-proclaimed “journalist” succeeded in displaying his deceptive “reporting” tactics.

In a pair of live streams posted to Posobiec’s Periscope profile, the former Rebel Media reporter can be seen lurking around the press conference, handing out flyers and conversing with attendees. One audience member asked him to confirm that the flyers were sarcastic, to which he responded, “Of course.” After the speeches concluded, Posobiec heckled Sen. Richard Blumenthal (D-CT) and later claimed to have “triggered” Sen. Ben Sasse (R-NE) to call him a “liar” and quote the Ninth Commandment at him. Posobiec was immediately mocked online.

Stunned by this extremely real flyer found by the guy who constantly makes things up https://t.co/QDKKFI2QVM

Posobiec’s stunt is another example of the extreme lengths he is willing to go to deceive his audience and troll news media. In June, Posobiec and fellow right-wing troll Laura Loomer interrupted a performance of Shakespeare’s Julius Caesar in New York City that depicted a character resembling President Donald Trump being assassinated (in line with the plot of the play). Posobiec screamed at members of the audience, calling them “Nazis” who are “inciting terrorists” and have “the blood of [Rep.] Steve Scalise” on their hands, referring to a shooting that injured a congressman.

It’s also been reported that Posobiec was the source of a “Rape Melania” sign at an anti-Trump rally, and he has claimed he incited an “assassinate Trump” chant in a group of protestors so he could film them. The media troll, who was briefly given temporary White House press credentials, was also a major proponent of the debunked “Pizzagate” conspiracy theory and was removed from a Washington, D.C., restaurant after he filmed a child’s birthday party during the peak of the hysteria surrounding the theory’s allegations that an underground sex ring was being operated beneath a pizza parlor.

Posobiec’s latest attempted stunt failed, but he remains an active disinformation smear merchant who occasionally succeeds at duping media into regurgitating his fabricated controversies, such as in the instance of the “Rape Melania sign” (which became a trending topic on Twitter) and the Shakespeare play disruption (which made national news). Reporters should view Posobiec as the fraudulent liar that he is and dismiss any temptation to consider him a credible source.