J. Christian Adams must feel like his star is fading. The former DOJ attorney hired under President Bush's politicized regime was once a favorite fear-monger of the right. Sixteen months ago, Adams was bursting onto the national scene with appearances on Fox News to hype the phony New Black Panther Party controversy, and now he's muttering George Soros conspiracies in the obscure back pages of PJMedia.com. In what must be a desperate last gasp for attention, Adams is now resorting to the worst of the forbidden rhetorical devices: Nazi comparisons.

For Adams, a speaker's use of the phrase “God is on our side” at a civil rights rally in Florida apparently evokes Nazi imagery. From his November 10 post at PJ Media, describing a small rally of African American community members protesting the arrest of some elected community officials on suspicions of election fraud:

The rally begins by singing revered hymns such as “We Shall Overcome.” The speakers claim the accused were arrested because of “racism.” Like the German Army belt buckle, the speaker says the accused will be victorious “because God is on our side.” The bloody shirt is waved - “they thought they forever would be in charge.” The criminal accusations are “nothing but mud thrown on the wall,” followed by a disturbing call and response evidencing genuine lawlessness beyond just the speakers.

The "German Army belt buckle" Adams links to bears the Nazi iron eagle with swastika and the German phrase, “Gott mit uns” - God with us. 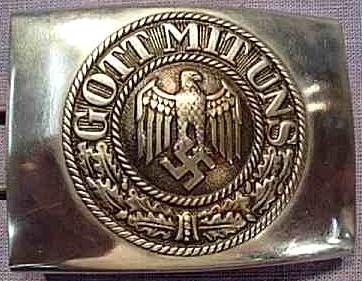 So to clarify for the record, J. Christian Adams sees a small gathering of African American civil rights activists citing their commonly-held belief that God is present and supportive in their lives during a protest, and Adams immediately thinks they resemble Nazis. It's tempting to delve into a Freudian analysis of Adams' psychological associations, but instead it's probably sufficient to note that his flawed simile doesn't even begin to scratch at the realm of rational thought.

Yes, it's true that the Nazis engraved “God with us” on their belt buckles; but the sentiment that “God is on our side” is no more symbolic of Nazism than eating sauerkraut or driving a Volkswagen. The belief that a particular culture, activity or way of life is favored by divine interests is prevalent everywhere from the pre-game prayers by local high school football teams to the governing philosophies of American presidents like George W. Bush. The notion that it's some unique and recognizable Nazi chant being invoked by black community members on the steps of their local church is absurd.

What's more appalling is the failed judgment by Adams' editors at PJ Media. Either they didn't read the post before applying their stamp of approval, or they agree with the assertion that these civil rights activists are comparable in any respect to Adolf Hitler's Third Reich.

J. Christian Adams is truly struggling for attention and relevance now that his book is receiving little fanfare and his voice is drowned out within the ranks of the other faceless ideologues at PJ Media. Otherwise, why go through with such a despicable race-baiting Nazi comparison in just his second column?