Rapper Kanye West promoted two pro-President Donald Trump figures in the span of a few days. On April 21, West praised Candace Owens, a far-right YouTuber who, among other things, has called for all Dreamers, people protected under the Deferred Action for Childhood Arrivals (DACA) program, to “be sent home.”

And on April 23, West tweeted out in nine parts a Periscope session by Scott Adams, Dilbert comic strip creator and prominent Trump supporter, during which Adams praised West for “alter[ing] reality.”

The far-right MAGA internet erupted in cheers, taking the tweets as evidence of West’s definitive “red pilling,” a term that far-right trolls co-opted from the movie The Matrix and that refers to “seeing things as they really are.” (The MAGA trolls popularized the term during the 2016 election cycle to refer to adopting the sort of contrarianism that denies the benefits of feminism and refuses to acknowledge the need for social justice.) 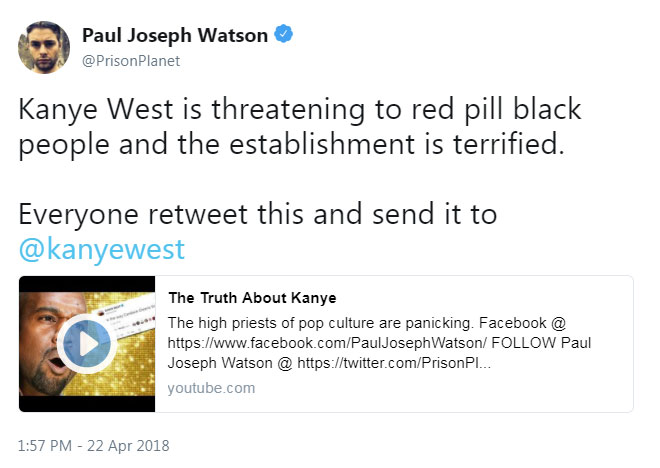 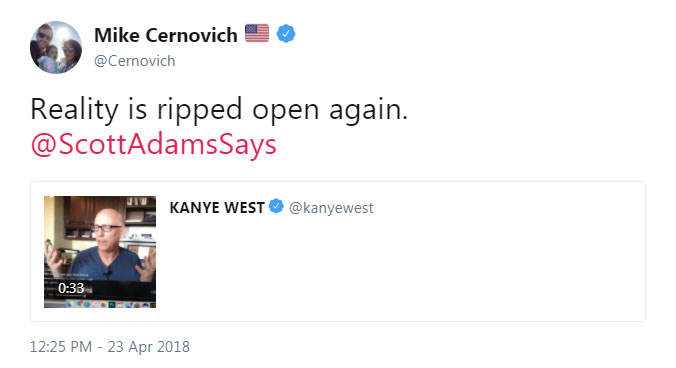 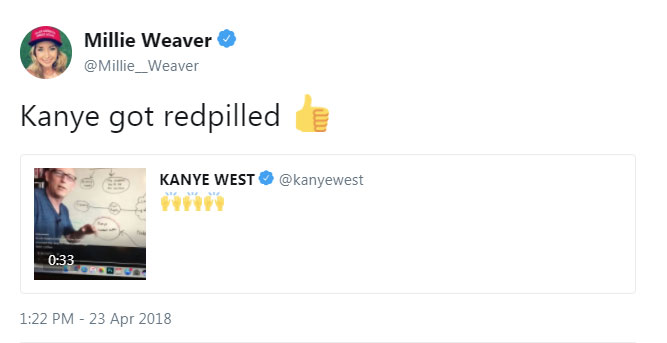 It is unclear to what extent West aligns with these pro-Trump personalities. But it is undeniable that his endorsement elevated the profiles of these two figures who have espoused toxic positions.

Owens built an online presence on Twitter and YouTube (where she used to go by “Red Pill Black”) through her commentary on race and politics. However, what launched her to prominence among MAGA trolls was a video she posted after the white supremacist “Unite the Right” rally in Charlottesville, VA, last summer in which she dismissed white supremacy as a narrative created by the media, minimizing the extremism displayed at the rally and the violent death of a woman who was protesting the white nationalists. It earned her an invitation on Infowars, Alex Jones’ conspiracy theory outlet, where she talked with Paul Joseph Watson and Jones about the myth of “black-on-black” crime and likened Black Lives Matter protesters to animals:

Owens was then appointed urban engagement director for Turning Points USA, which actively fundraises off of fearmongering about “nuttiness on college campuses” on Fox News. She has called for all Dreamers to be sent home: 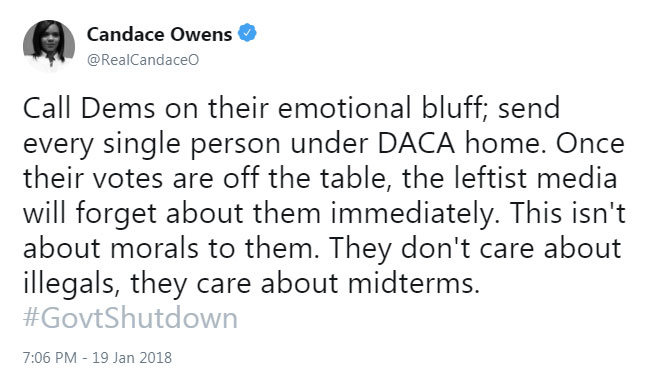 Owens has used her growing platform to push various debunked myths, such as the idea that undocumented immigrants are voting illegally or that immigrants “have been directly harming the black community” by taking their jobs, a talking point espoused by an anti-immigrant “hate group” for which Vox says “the receipts simply don’t exist.”

Mirroring her dismissal of white supremacy, Owens has also been equally blasé about the statistical evidence that shows racial disparities in the way police uses force against Americans. She has claimed, “Police brutality is not an issue that is facing the black community whatsoever.” She has also argued that Trump “represents the very first opportunity for black Americans to jump off of this ideological slave ship that is the Democratic Party.” And despite “freaking out” about West tweeting that he “loves the way” she “thinks,” Owens once claimed in a video directed at celebrities that “we do not care, not in the slightest particle of an imaginary thing, what you think.” On her first Infowars appearance, Owens also praised West for being “awake,” “never subscrib[ing] to any type of politics,” and “slaying this idea of groupthink.”

Scott Adams, known for creating the Dilbert comic strip, is a prolific Periscope user (with 100 broadcasts so far) who rose to prominence among MAGA trolls because of his prediction that Trump could win the 2016 election. Adams reacted to the news about West’s tweet by doing a Periscope session full of his usual pseudo-intellectual arguments, claiming that history never repeats itself and that West “ripped a hole in reality” with his tweet about Owens:

Scott Adams tells you how Kanye showed the way to The Golden Age. With coffee. https://t.co/RCFwKuXjCA

While many pro-Trump commentators lavish praise on the president, Adams’s commentary stands apart. Salon’s Amanda Marcotte rounded up some of the things Adams has said about Trump:

In January, after rapper Jay-Z criticized Trump for reportedly questioning why America should take in immigrants from “shithole countries,” Adams wrote a pro-Trump rap verse and called on his followers to record videos of them rapping the lyrics.

In his foray into MAGA politics, the comic illustrator has made waves by issuing tone-deaf commentary on feminism. He once compared women to children on a blog post he deleted after getting backlash -- but not before claiming that readers offended by his misogynistic rant lacked reading comprehension and were too emotional to understand it:

That's the reason the original blog was pulled down. All writing is designed for specific readers. This piece was designed for regular readers of The Scott Adams blog. That group has an unusually high reading comprehension level.

In this case, the content of the piece inspires so much emotion in some readers that they literally can't understand it. The same would be true if the topic were about gun ownership or a dozen other topics. As emotion increases, reading comprehension decreases. This would be true of anyone, but regular readers of the Dilbert blog are pretty far along the bell curve toward rational thought, and relatively immune to emotional distortion.

Adams has also argued that rape and other sexual offenses can be attributed to men’s “natural instincts”:

Powerful men have been behaving badly, e.g. tweeting, raping, cheating, and being offensive to just about everyone in the entire world. The current view of such things is that the men are to blame for their own bad behavior. That seems right. Obviously we shouldn't blame the victims. I think we all agree on that point. Blame and shame are society's tools for keeping things under control.

The part that interests me is that society is organized in such a way that the natural instincts of men are shameful and criminal while the natural instincts of women are mostly legal and acceptable. In other words, men are born as round pegs in a society full of square holes. Whose fault is that? Do you blame the baby who didn't ask to be born male? Or do you blame the society that brought him into the world, all round-pegged and turgid, and said, “Here's your square hole”?

When asked about his blog post, he wrote on the site Feministe that women were compromised by their emotions and couldn't understand what he was trying to say.

Adams has written extensively about the "the global gender war.” In a 2015 blog post, Adams wrote that we live in a matriarchal society we believe is actually a patriarchy, said sex is “strictly controlled by women” and argued that lack of sex drives teen boys to violence. He’s also written about how he believes the 2016 Democratic National Convention lowered men’s testosterone levels.

Adams has tweeted that the real effect of the #MeToo movement was that managers would hire fewer women because of perceived legal risk. He’s claimed that he could persuade his readers to have an orgasm with his blog post.

His blog is also very popular in both pickup artist and men’s rights communities. In a post from 2016 on the “humiliation of men,” he writes, “Many of you can’t talk about this topic without being accused of sexism, losing your jobs, and being cast out of your social groups. But I can talk about it because I endorse Hillary Clinton for president. I did that for my personal safety, because I live in California, but still, I’m on the progressive side now. That gives me some extra freedom of speech.”

Adams has catered to conspiratorial far-right groups by appearing multiple times on Infowars, where he excused Trump calling El Salvador and Haiti, among others, “shithole countries” by blaming the aides who leaked the comments and the journalist who wrote them up. Adams has also declared himself a believer of the conspiracy theory that Democratic National Committee staffer Seth Rich's death was linked to the email hacking of the committee.