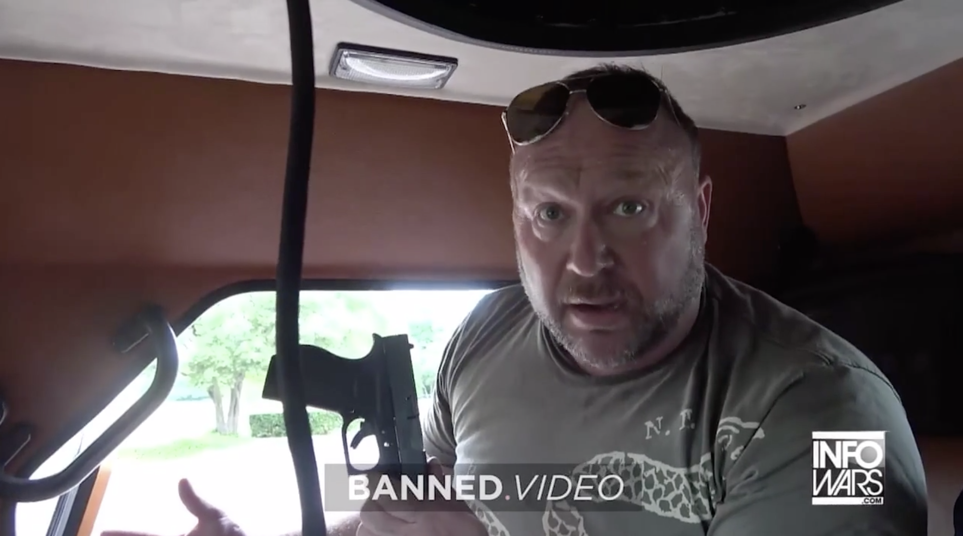 As police forces around the country carry out indiscriminate violence against protesters, bystanders, and press -- and the president tear-gasses peaceful protests and incites mayhem for a photo-op -- far-right conspiracy theorist Alex Jones is recklessly telling his followers to carry guns to counter protesters.

On his far-right Infowars outlet, Jones has frequently hyped the prospect of a violent civil war in this country and he is now using protests over the police killings of George Floyd and Breonna Taylor to advance his narrative on this topic.

During his May 31 broadcast, Jones played a clip of an armored vehicle that Infowars takes to events and which appeared to be slightly damaged at a recent protest. Holding a pistol and calling himself “a big gun enthusiast,” Jones said that he normally doesn’t carry firearms, “but now I’m actually carrying a 9 mm because these people will probably try to molotov cocktail us or attack us, they’ll try to kill us if they were able get in” the vehicle. He added, “So that’s what we have to do in America is now arm ourselves to go on the streets of America because you can’t count on the police because they’re surrounded and outgunned.”

Although YouTube and Facebook ban Infowars content, the platforms’ enforcement is spotty, and the video is available for viewing at both platforms. Jones' show is also broadcast on terrestrial radio and through Infowars’ online streaming platform, banned.video.

Throughout his broadcast, Jones used threatening language when talking about the protests. In one instance while defending police, he gave tacit approval to people who would attack houses where Democrats live. Jones said, “I’m not for offensive violence, but if I saw people attacking Democrats’ houses or going after them or going after globalists, I’d say, ‘Well, at least you’re going after who runs it,’” before saying, “They’re trying to cause a civil war because they’re losing.”

During another segment, Jones said, “You guys started this, and you're backed by a major foreign power so you’re going to get hurt now.” Jones added: “Once America is under attack and once we’re unleashed, there is not anywhere you people can hide. And finally folks have figured out that there is no safe way to play games with you guys. So you want a fight, you got one. Hope you’re ready for it, dumbasses. Hope you’re ready for it.”

Jones is including disinformation about the protests in his broadcasts. For example, Jones introduced graphic video of a violent beating that occurred in Dallas by saying, “Here is just one of the many videos of white people being beaten to death or near death for just being white.” After playing the clip, Jones said, “That man is now in a coma in Dallas, but he’s white, he deserves it.” He failed to mention that the man was beaten after charging a group of protesters with a sword (and was reportedly in stable condition at the hospital after).

Infowars -- a supposedly anti-authoritarian outlet -- is also egging on police violence against protesters. During a May 30 broadcast, Infowars host Owen Shroyer said of a police officer who was allegedly bumped and spit at by a protester, “If that officer didn’t have a badge and a uniform on, he’d stomp that guy’s dick in and that’s exactly what he deserves,” and went on to suggest that police turn in their badges and confront protesters while “not on duty.”

Jones and his outlet are alleging that a familiar cast of characters is organizing the widespread protests, including philanthropist and financier George Soros, the “ChiComs,” the “deep state,” and Barack Obama. These are the same types of groups and people Jones has repeatedly claimed are attempting to foment a second civil war in the U.S.

As Media Matters documented, during the summer of 2017, Jones devoted huge swaths of time on his show to hyping the prospect of a civil war or a race war in the U.S., and he repeatedly expressed his willingness to personally participate in violence, including carrying out executions. There was a clear pattern to Jones’ commentary: The left would start the civil war and then any violence carried out against them would be permissible. But really all Jones was doing was giving his supporters a pretext to carry out violent acts against their political opponents, as he is once again doing now.