During an October 10 campaign rally held in Minneapolis, Minnesota -- home to the largest Somali population in the U.S. -- Trump attacked the local Somali community, telling the crowd, “For many years, leaders in Washington brought large numbers of refugees to your state from Somalia without considering the impact on schools and communities and taxpayers.” Trump supporters jeered in response. The crowd then broke out into applause and cheers when Trump bragged that as president he has “reduced refugee resettlement by 85%” and taken executive action to allow cities to refuse to accept refugees. In effect, Trump was saying that Somali refugees in Minnesota should be treated as unwelcome in their own communities.

As HuffPost’s Ryan Reilly noted on Twitter, Trump’s attacks come as three of his supporters are in prison for plotting to bomb an apartment complex where many Somali refugees live:

During the rally, Trump also attacked Rep. Ilhan Omar (D-MN), who is a refugee from Somalia, calling her an “America-hating socialist” and a “disgrace.”

Between October 10, the day of the rally, and October 16, the three major broadcast news channels, ABC, NBC, and CBS, completely ignored Trump’s attacks. There was no discussion of the attacks during the nightly news broadcasts or during Sunday political talk shows on October 13. 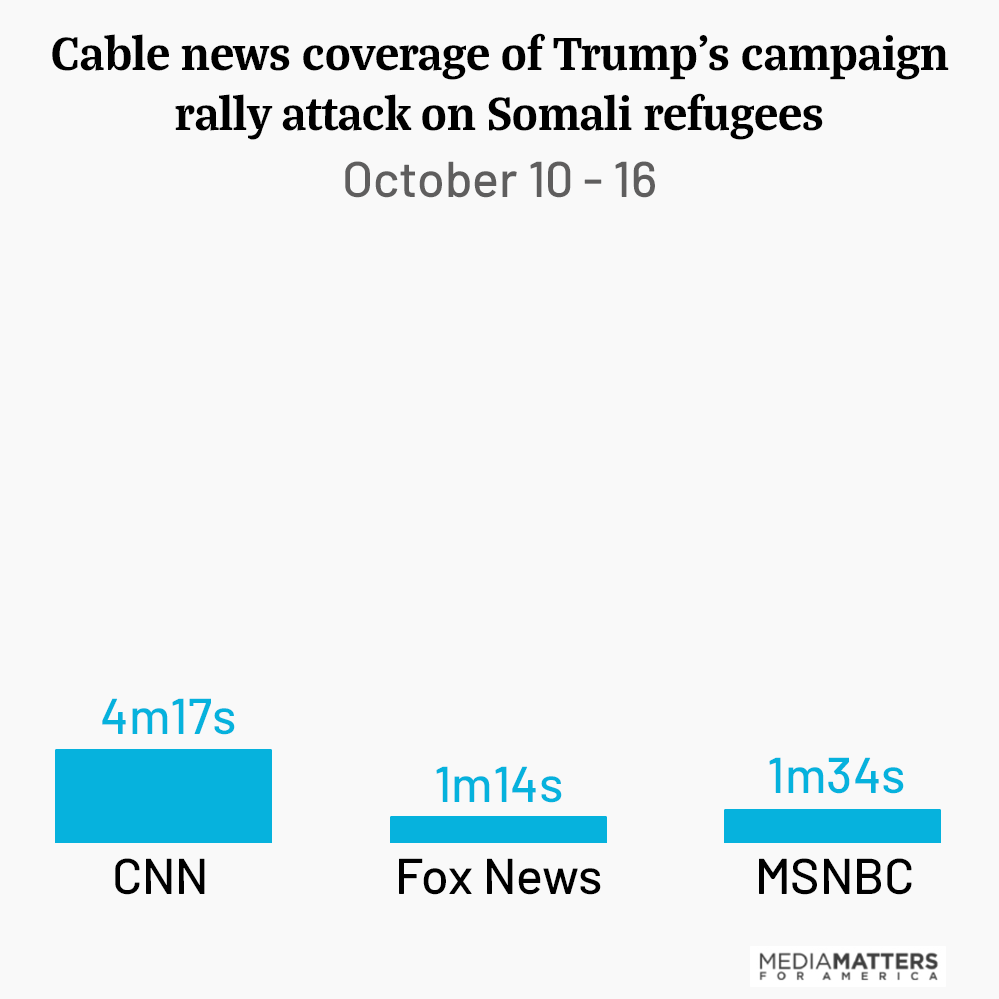 Two CNN hosts mentioned Trump’s attacks. During his October 11 broadcast, Don Lemon slammed Trump’s comments and pointed out that Trump has a pattern of attacking lawmakers of color.

The second time CNN covered the remarks were during the October 11 broadcast of The Situation Room. Host Wolf Blitzer asked guest former U.N. Ambassador Susan Rice about the comments, and she harshly condemned what she called Trump’s “ugly, ugly race-baiting and hate-mongering.” According to Rice, “What he basically was saying to that crowd is we’re going to keep people of color out of this country.”

Fox News also covered Trump’s attacks twice. In coverage of the rally on October 10, Fox News guest Ethan Bearman raised the attacks after Fox’s Shannon Bream falsely claimed that Trump’s focus is only on undocumented immigrants. Bearman said that Trump “demeaned” Somali refugees and called the president’s attacks “anti-American.” During the October 11 broadcast of Fox’s Outnumbered, Fox contributor Marie Harf interjected during a discussion of the supposedly entertaining nature of Trump’s rally to call his attacks “disturbing” and explain that Trump had incited people to boo their neighbors.

Among local broadcast news coverage in the Minneapolis market, one station stood out for whitewashing Trump’s attacks. KARE 11, an NBC-affiliate station, ran repeated news headline segments that put Trump’s attacks among the “highlights” from the speech and characterized them as the president covering “things unique to Minnesota, including Somali refugee resettlement.”

Trump had also demonized Somalis in a 2016 campaign rally in Maine, where there is a large Somali refugee population. During the rally, which was held in Portland, Trump said, “We’ve just seen many, many crimes getting worse all the time, and as Maine knows — a major destination for Somali refugees — right, am I right? Well, they’re all talking about it. Maine. Somali refugees. We admit hundreds of thousands — you admit, into Maine, and to other places in the United States — hundreds of thousands of refugees.”

Trump’s previous racist comments about Omar and three other congresswomen of color in July had triggered a firestorm of news coverage -- although mainstream news coverage often devolved into debates over whether Trump’s racism was helpful to him politically. Now with Trump’s Ukraine scandal and his blunderous foreign policy with Turkey dominating the news, Trump is able to appeal to his base with open bigotry and minimal pushback.