Senate Republicans are deliberately crafting legislation in complete secret. And it’s not just any legislation. This is a sprawling social policy bill that would directly impact the welfare of tens of millions of Americans.

The bill represents the hallmark legislative promise that the Republican Party has been making for seven years: to repeal and replace Obamacare. For Republicans, it’s arguably their most important piece of lawmaking this century.

Spooked by the prospect of mass public resistance to the legislation, Republicans are strategically keeping it under wraps from the press and the public so they don’t know exactly what’s being planned. (And who’s in charge of drafting the bill? According to press reports the secret bill is being negotiated by a core group of 13 men.)

Note that what the public does know of the bill, it hates -- a lot. (Here’s one small reason why.)

The idea that a major party in American politics is going to try to pass landmark health care legislation without scheduling a single hearing, without listening to testimony from any health care experts, without allowing the other party to offer up amendments, and most importantly, without letting the American people know what’s in the bill in a timely manner is the antithesis of an open democracy.

Thankfully, some voices in the media have been loudly ringing alarm bells:

They're trying to pass major legislation *in secret*. This is dark, dark stuff.

I have covered every major health bill in Congress since 1986. Have NEVER seen anything like this. https://t.co/eWcmIQOsKX

But in terms of the day-to-day newsroom coverage of this secretive spectacle, reporters seem to be nonplussed by the GOP’s highly unusual -- and completely private -- approach to overhauling the health care system, which represents roughly 20 percent of the U.S. economy.

Too often, the Beltway press’s reaction to the Republicans’ extreme maneuver has been remarkably subdued and almost nonchalant.

Here’s how a recent Politico update on the health care bill briefly dealt with the issue of secrecy: “A public copy of the bill or the CBO score are not expected until just days before any vote, minimizing the ability of opposition to mobilize, aides said.”

Senators said no draft bill has been completed, and aides said the party is fearful of leaks of the party’s plans falling into the hands of conservative or liberal activists who would seek to scuttle the GOP’s negotiations. Those factors are leading to a secretive and opaque process that Republicans say is the only way to have a chance at success without the party’s ideological divides bringing down any early draft.

“This is typical with the process,” said Sen. Jeff Flake (R-Ariz.). “We’re under pressure with the rules of reconciliation and everything else. This is not that unusual.”

There was no context about how completely unheard of it is to a try to create a nationwide health care bill in secret; instead, the piece offered up Republicans’ excuses for why they are proceeding with major legislation in secret. Also of note, the article quoted four Republican senators by name and no Democrats.

Even articles that have done a good job of highlighting some of the negative impacts of Republicans’ proposed health care overhaul have dropped the ball on explaining the absurdity of the legislative process.Last month, at very end of an article about the bill, the Los Angeles Times inserted this brief mention (emphasis added):

What effect the [CBO] report will have on the Senate Republican discussions remains unclear, however: All the debate is taking place behind closed doors.

Senate Majority Leader Mitch McConnell (R-Ky.), who is leading the effort, has elected not to develop healthcare legislation through the traditional process of holding public hearings and debating amendments in committee.

McConnell “has elected”? That’s it? That seems to wildly downplay the situation. It makes it sound like McConnell just woke up one day and said to himself, “I think I’m going to tear up congressional precedent and try to pass a bill in total secret.” (If it’s that easy, why did Democrats bothering holding hundreds of hours of hearings for Obamacare?) By the way, McConnell in March promised a “robust” amendment process on the health care bill. That turned out to be a lie.

Meanwhile, on June 12, The New York Times published a granular article about the Republican attempts to finish the bill. But only in passing did the Times acknowledge that the bill was being written “behind closed doors.” Nowhere did Times reporters note that the GOP is refusing to hold any hearings or allow Democrats to offer amendments. (In a sign Republicans’ secrecy may finally be breaking through into news coverage, on Thursday afternoon the Times did publish an extensive article focusing on the extreme secrecy surrounding the bill.)

Same with a detailed article on June 8 in The Washington Post: “Senate Republicans consider keeping parts of Obamacare they once promised to kill.” It contained no reference to the fact that Republicans were refusing to make the bill public. Also, the Post article quoted eight Republican senators and one Democrat.

There was a detailed CNN article from June 12 about the bill and it also failed to mention that Democrats and the public are being completely locked out of the process. It’s true that on that same day another CNN health care article addressed the elephant in the room, noting, “This is all being done behind closed doors.” But again, there was no context to explain just how completely unheard of that is in the United States Senate.

What does important, helpful context look like for this story? From Fortune:

Not only will the draft bill text not be released to the public—it won't even go through the regular Senate committee process. By contrast, the debate over the Affordable Care Act spanned more than a year after former President Barack Obama's inauguration and involved more than 100 hearings, as well as adoption of multiple GOP-sponsored amendments.

According to data compiled by Media Matters, from June 1-14, Republicans' health care bill received scant attention on the nightly broadcast news shows, comprising just three minutes of coverage combined. The secrecy of the bill earned only one passing mention during that time period, when NBC's Kristen Welker noted on June 13 that “Senate Republicans have come under fire for trying to hammer out a health care bill behind closed doors and without a public hearing so far.”

The same study found that outside of MSNBC, evening programming on cable news networks also didn't devote much attention to the secretive process: 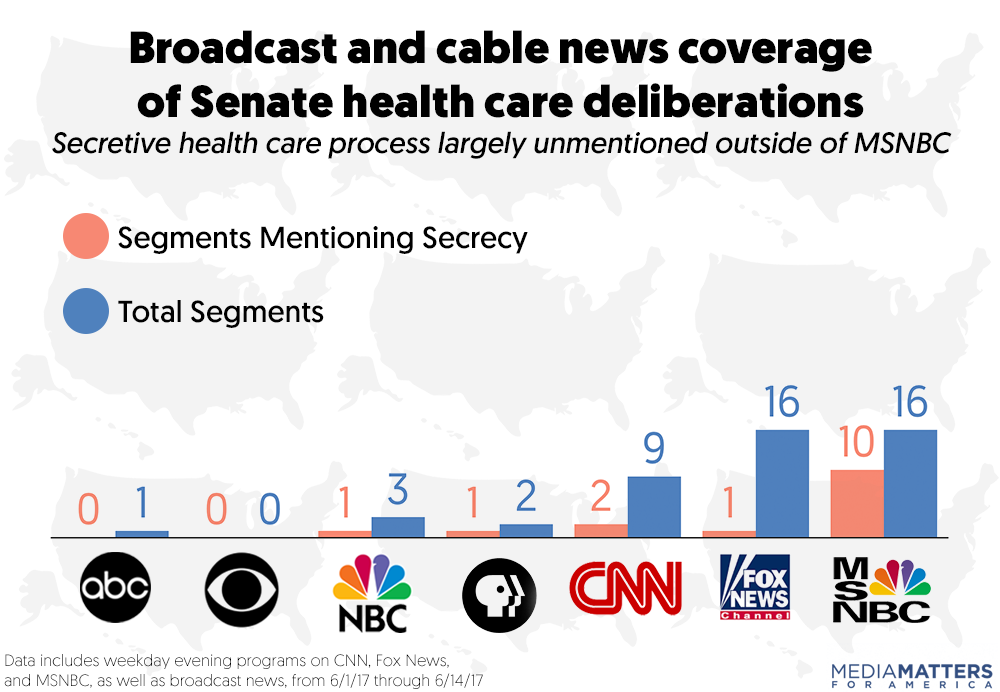 Another problem is that when journalists have addressed the GOP’s historic secrecy, it’s too often presented in the context of a partisan battle. For instance, Axios this week reported that Republicans “have no plans to publicly release” a draft of the health care bill, presenting the significance this way:

Why it matters: Democratic senators are already slamming Republicans for the secrecy of their bill writing process, and this isn't going to help.

But from a news perspective, that’s not why this really “matters.” It matters because the way Republicans are attempting to overhaul the health care system is unprecedented.

That’s why it matters. That’s why this ought to be treated as very big news.