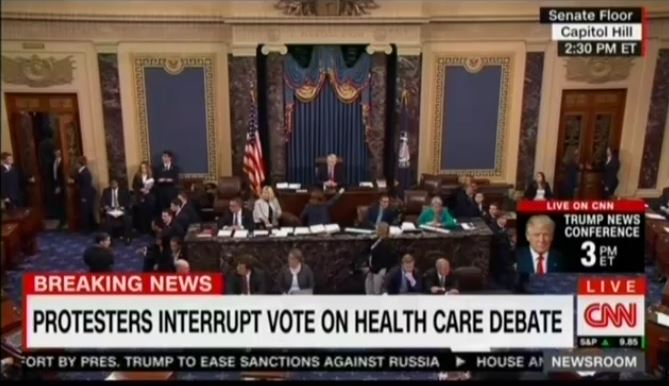 Capitol Hill staff blocked reporters from reporting on demonstrators who were protesting the Senate’s vote to proceed to debate on an as-yet-unknown Republican health care measure. In at least one case, a journalist said they forced him to delete his video of the protesters.

As voting began on the measure, dozens of protesters yelled “kill the bill” and “shame” from the Senate gallery. The demonstrators were removed from the gallery and placed under arrest by Capitol Police:

But reporters who attempted to report on the scene were denied access on the grounds that they were observing a “crime scene”:

Sergeant at Arms just backed reporters off, called it a 'crime scene.' Protesters have been escorted away.

Senate gallery staffer tells reporters to “back up” away from protesters who are being arrested. “This is a crime scene”

Reporters were told they could not take photos and had to delete any they had taken:

Reporters blocked from Senate halls where protesters being arrested, shouting, “Kill the bill!” Being told, “no photos. Delete your photos.”

And in at least one case, a journalist says he was forced to delete a video he had recorded:

Capitol Police made me delete the video I recorded. https://t.co/NQH2fLFYiO

In recent weeks, Republicans have sought to curtail press access on Capitol Hill. At one point, the Senate rules committee said it would begin enforcing a rule banning reporters from filming interviews with senators unless they had been granted permission ahead of time, according to journalists. Following an uproar, Republicans backed off.