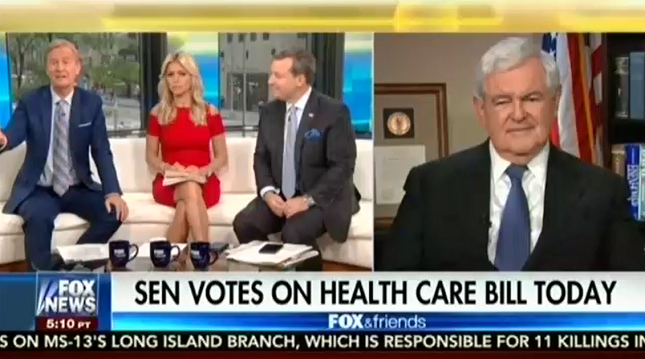 In the wee hours of the morning of July 28, Democrats, activists, and three Republican senators just barely thwarted the GOP’s attempt to repeal and replace the Affordable Care Act (ACA). Ever since President Donald Trump pledged to make repealing the ACA one of his first priorities as president -- and Republicans retreated to secrecy to take health care away from tens of millions of people -- media have continuously made six key mistakes in their health care coverage.

During the health care debate, broadcast and cable news largely marginalized key perspectives from those who would be among the most affected by the legislation. This, in turn, correlated with a lack of coverage on how those same people would be affected by the legislation. Like the GOP, broadcast and cable news relied almost solely on white men to discuss the bill. This absence of diverse voices correlated with little to no coverage of how the legislation would affect marginalized groups, like the LGBTQ community and people of color.

At its core, health care is an intersectional issue. As the American Medical Association noted, “Intersectionality has much to offer to population health in providing more precise identification of inequalities, in developing intervention strategies, and ensuring results are relevant within specific communities.” But this message was absent from most broadcast and cables news coverage of the GOP health care plans.

Focusing on process over consequences

Throughout the debate, media were focused heavily on the process behind the bill, highlighting vote counts and speculating about support. At the same time, key consequences of the bills were barely noted. A Media Matters study found that on cable news, the negative impacts of the bills were drowned out by discussion of the process. Cable and broadcast networks also largely ignored personal stories by those who would be most impacted by the bills. At every stage, the impact of the bills was whitewashed by the media, including Sunday morning political shows, national newspapers, cable morning shows, and some local newspapers.

Letting the GOP off the hook for sabotage efforts

Right-wing media also adopted the GOP’s revisionist history when it came to the ACA and allowed Republican lawmakers to escape responsibility for their years-long efforts to sabotage the health care law. Right-wing media repeatedly pointed to things like insurer withdrawals from the exchanges and slight downturns in gains brought about by the law to claim the ACA was “struggling,” or even in a “death spiral.” In doing so, right-wing media conveniently forgot that the GOP has sabotaged the law every chance it could by eliminating the risk corridor provision of the law, refusing to build insurance markets in several states, rejecting federal dollars to expand Medicaid, and not appropriating “dedicated funds” to implement the law.

The Trump era has seen even more extensive sabotage efforts. The Center on Budget and Policy Priorities chronicled over a dozen ways the Trump administration has already weakened the law. And recently, Trump renewed his threat to end cost sharing payments to insurers, a move that would put the market in shambles.

Not only were Republicans relatively unscathed by their efforts to sabotage the ACA, but television reporters and hosts also allowed them to push misinformation by failing to debunk their claims. Throughout the debate, Republicans took to broadcast and cable news to push falsehoods in order to gain support for their various plans to repeal and replace the ACA. Sunday shows, in particular, proved to be a fruitful platform for GOP lawmakers to lie about the law.

When Trump gave a blockbuster interview on July 19 to The New York Times, all three reporters failed to push the president on health care policy as the bill was coming to a vote in the Senate. Similarly, MSNBC’s Morning Joe allowed Sen. Rand Paul (R-KY) to push a nonsense claim that the Congressional Budget Office (CBO), which found the bills would throw tens of millions of people off insurance, had a methodology akin to astrology.

Right-wing media used the debate to push some of their favorite health care policies, even though they all fall somewhere between unworkable and disastrous. One of the most popular policy proposals was high-risk pools, which have “a lousy history” and have been “prohibitively expensive for consumers.” Additionally, Fox News’ Marc Siegel praised health savings accounts, which “primarily benefit the wealthy, the healthy, and the educated,” not the uninsured.

Perhaps the most dangerous solution pushed by right-wing media was one that almost became law: repealing the ACA without a replacement plan. The CBO said such a move would have left 32 million people uninsured and premiums doubled, by 2026.

Ignoring the debate all together

Perhaps the most ridiculous mistake television and print media made during the health care debate was ignoring it. While Senate Republicans used an “almost-unprecedented opacity” to craft the bill, media let them get away with it by either not reporting or burying reports on the legislation. One of the worst offenders of this strategy was Fox’s Sean Hannity who somehow discussed Hillary Clinton more than the health care bill as the Senate was voting on it.