Google has a serious problem with promoting and monetizing fake news, as a recent fabricated story about actor Keanu Reeves has shown once again. The story, which originated from a fake news website, was still one of the first results for an incognito search of Reeves’ name in the news section of Google’s platform even after it was flagged as false, and the company’s advertising network, AdSense, is helping monetize the same fallacious story.

On November 19, prominent fake news website YourNewsWire published a post headlined “Keanu Reeves: Hollywood Elites Use ‘Blood Of Babies’ To Get High” that claimed Reeves said that “Hollywood elites use ‘the blood of babies to get high’” and that “‘these people believe the more innocent the child, and the more it suffered before it died, the better the high.’”

The story was blatantly fake, but it quickly spread. It was posted on both of YourNewsWire’s associated Facebook pages, as well as on other fake news websites, some of which are funded by ads from Google AdSense (identifiable by the blue triangle in the top right corner), one of the advertising services most widely used by fake news websites. On November 21, the story appeared on the fake news website The Weekly Observer, under the headline “Keanu Reeves warns that the elite of Hollywood drinks blood from babies.”

Despite the blatantly false claims in The Weekly Observer’s post, Google has lent legitimacy to the story by including it in its news results. It appears as the third result in a search for “Keanu Reeves.” (Results are from a search conducted in an incognito window; a user's search history and preferences may affect what they see in a normal window.) 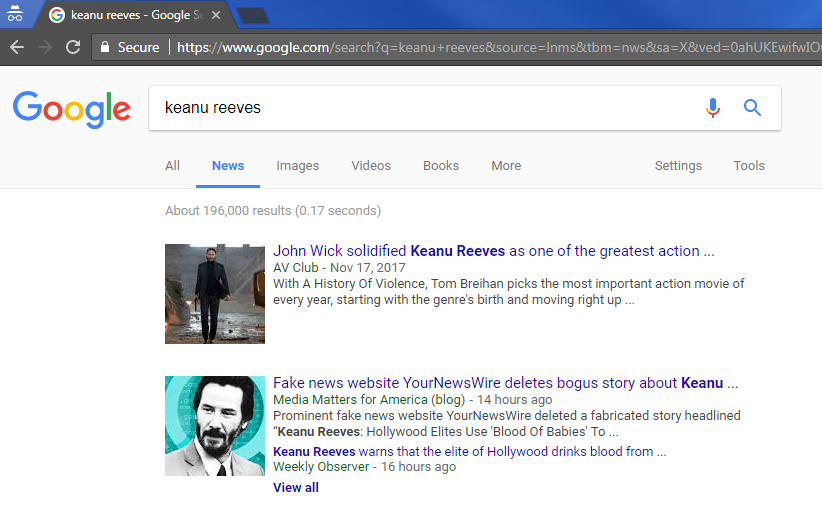 Not only is Google helping the story spread by presenting it prominently in its search results, the company is also allowing The Weekly Observer to monetize its fake story by permitting Google AdSense ads to appear on the page. Since 2011, Google's placed advertisements have been identifiable by a blue triangle icon and the words “AdChoices.” Several such advertisements are visible on The Weekly Observer’s post. 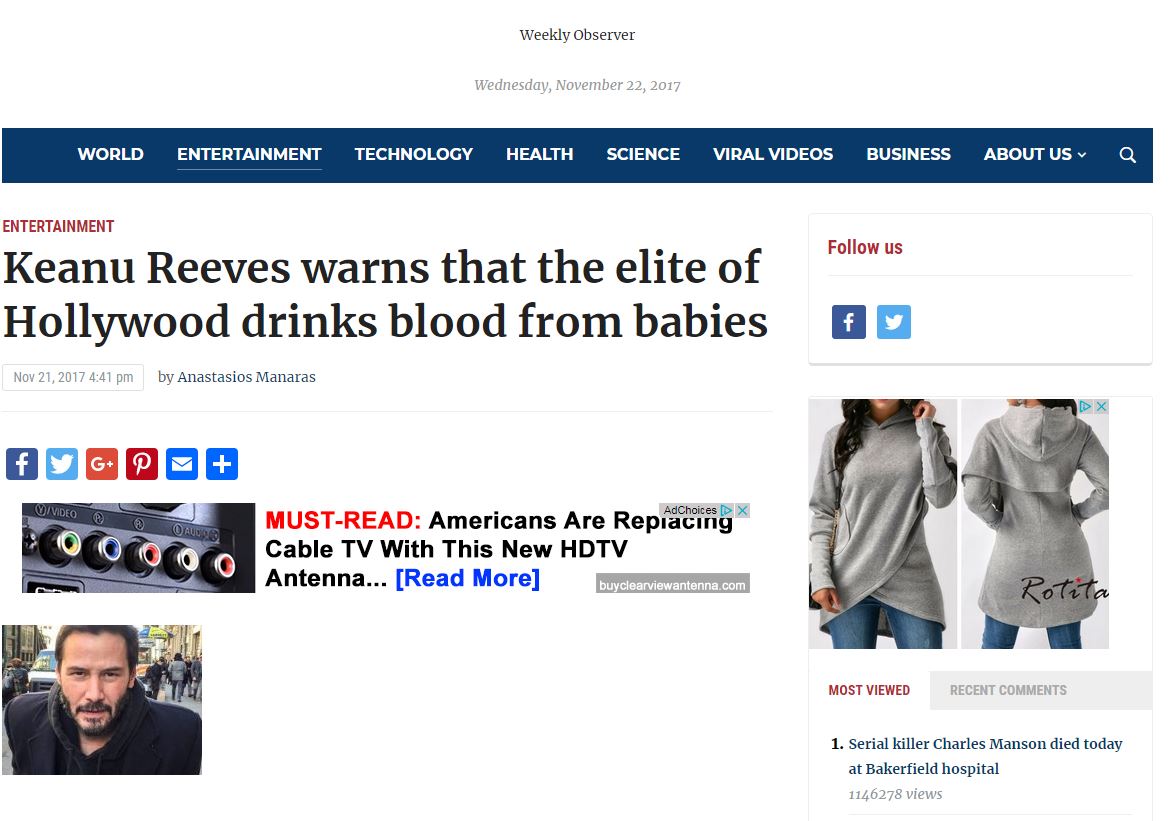 In recent testimony in front of the House intelligence committee, Google’s senior vice president and general counsel claimed that the company has “taken steps” to demonetize misrepresentative websites. According to Google AdSense’s policies, “Google ads may not be placed on pages that misrepresent, misstate, or conceal information about you [or] your content.” Despite the company’s promises to prevent the monetization of misrepresentative and fallacious content, Google ads still regularly appear alongside fake stories, and Google AdSense is still profiting off of multiple fake news sites.