During testimony in front of the House Intelligence Committee, Kent Walker, Google’s senior vice president and general counsel, testified that the company has “taken steps” to demonetize misrepresentative websites and has added to its policies “around or against hate speech.”

It sure doesn’t seem that way.

Last week, Media Matters wrote about Freedom Daily, a fake news website peddling racist lies about the ongoing NFL protests that was getting its advertisements through Google’s advertising service AdSense. Freedom Daily clearly violates Google AdSense’s rules against race-based incitement of hatred, in addition to Google's stance against fake news. For example, on October 4, the site accused “racist” black Oakland Raiders players of breaking their white quarterback’s back because he wouldn’t kneel during the national anthem (and because he is white). Additionally, a September article about a singer who knelt during the national anthem in solidarity with the protesting players asked, “Wouldn’t you love to see these ingrateful rich spoiled bastards, including this 3rd rate singer, go to the Africa and try to make a buck there?” Right above that paragraph was an ad from Google Adsense (if you click on the blue triangle in the corner of the ad, it directs you to a page labeled “About Google ads”): 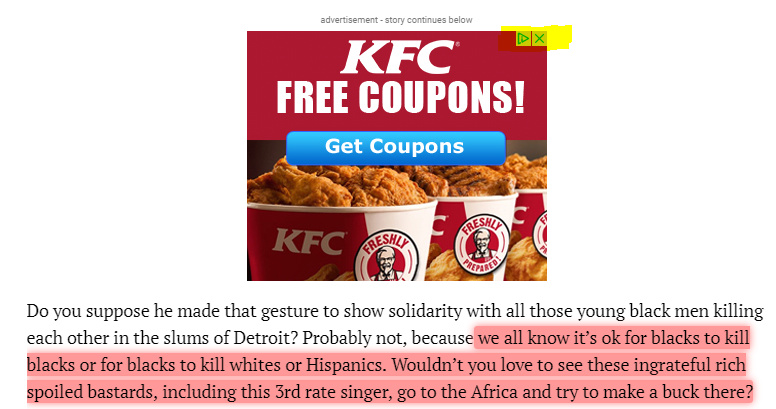 In fact, just Tuesday, the site published under a different byline the exact same racist October 4 article lashing out at black NFL players. The article is still being monetized by Google’s ad service.

If Google is doing what it claims, it’s missing a pretty big player by continuing to monetize Freedom Daily, which has pushed over 100 articles about the NFL protests, many of which denigrate black players through racist fake news -- and it’ll have to step up its efforts to make any real change. Because unless Google wants to argue that the site’s racist lies and made-up stories aren’t in violation of its standards on misrepresentative content and hate speech, why is the website still being monetized?

If Google needs help identifying fake news websites that should be demonetized, the company can give Media Matters a call -- we’d be happy to point it in the right direction.