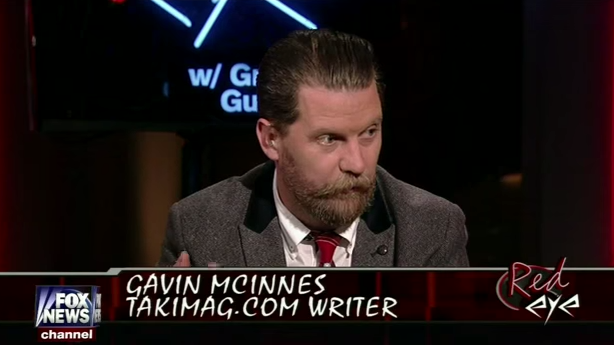 The Daily Caller defended a commentator who used the words “fag” and “trannies” in a post assailing the transgender community, blaming “politically correct” mobs for allegedly getting the post censored.

We're all transphobic. We aren't blind. We see there are no old trannies. They die of drug overdoses and suicide way before they're 40 and nobody notices because nobody knows them. They are mentally ill gays who need help, and that help doesn't include being maimed by physicians. These aren't women trapped in a man's body. They are nuts trapped in a crazy person's body. I see them on the streets of New York. They are guys with tits and a sweatshirt. They wear jeans and New Balance. “What's the matter with simply being a fag who wears makeup?” I think when I see them. You're not a woman. You're a tomboy at best.

By pretending this is all perfectly sane, you are enabling these poor bastards to mutilate themselves.

The post generated a significant backlash, with scores of writers demanding that their work be removed from Thought Catalog. Within a week of the post's publication, McInnes was placed on “indefinite leave” from his position as chief creative officer of the ad agency Rooster.

In a September 2 article, Daily Caller reporter Patrick Howley called the criticism of McInnes' post evidence of a “politically correct hysteria” engulfing the country. Howley also interviewed McInnes, offering him a platform to denounce the “culture of psychotic harassment” that he alleged was persecuting him:

Writer, commentator and Vice magazine co-founder Gavin McInnes said that politically correct hysteria like the kind that recently cost him his job is similar to the mafia.

“It's a real quandary people who write have to face right now,” McInnes told The Daily Caller. “Am I going to speak freely or am I going to hide?”

McInnes, who was in Georgia shooting a movie at the time of the scandal, is not too concerned about his livelihood. But he bemoaned the plight of young writers starting out in an industry that you'd think would appreciate candor, and instead punishes it in storms of faux-moralistic activism.

McInnes is one of the few writers in America today willing to expose the mechanics of our P.C. outrage culture, and to deflate the idea that pro-censorship Internet hordes are doing anything righteous. Will mine be the first generation in history to gauge intellectual success as a measure not of challenging taboos, but rather of maniacally defending them? [emphasis added]

This isn't the first time McInnes has found himself at odds with the “P.C. outrage culture.” McInnes is a former writer for VDARE.com, branded a white nationalist “hate group” by the Southern Poverty Law Center. In June, McInnes made headlines when he attacked astrophysicist Neil deGrasse Tyson after the astrophysicist spoke out about being racially profiled. “He had a huge afro and a cutoff shirt and New York was a war zone. Sorry, you fit the profile,” McInnes said on Fox News.

The Daily Caller's laudatory words for McInnes after his latest outburst raise the question of what the website won't defend, as long as it can be depicted as a bold assault on political correctness. By effectively condoning a post that calls transgender people “fags” who would be better off just wearing make-up, The Daily Caller has shown that not even hate speech is a bridge too far.

If McInnes is looking for a place to spew that kind of bigotry with impunity - and perhaps toss in a transphobic slur or two - he might to consider sending his resume to The Daily Caller.