The Gateway Pundit’s Jim Hoft published an article baselessly claiming that the suspect in the Manchester, England, bombing outside of an Ariana Grande concert on May 5, Salman Abedi, was “a Libyan refugee to England.” Hoft also tweeted the article. However, the article Hoft cites as his sole source is a report by The Telegraph that explains that Abedi was in fact “born in Manchester in 1994” and that his parents were “Libyan refugees who came to the UK to escape the Gaddafi regime.” From Hoft’s article: 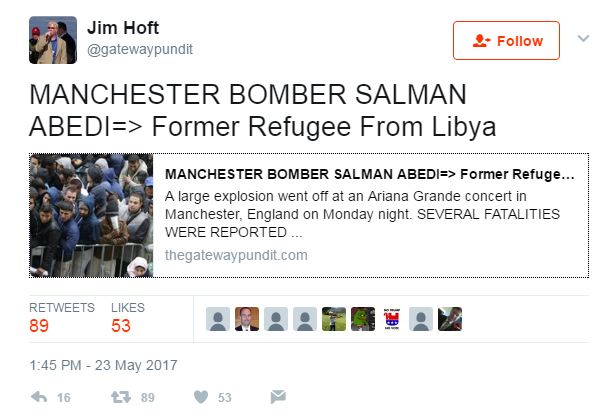 UPDATE: Hoft updated his headline to reflect that Abedi is the “son of refugee parents” and noted in the post that he was the “son of Libyan refugees to England” without mentioning the mistake.