In 2018, conservatives controlled all levers of the federal government, Fox News once again led in ratings, and conservative websites dominated the national narrative on the internet. But Fox News, hell-bent on portraying conservatives as victims, nevertheless found random events to be outraged about throughout the year. Below are some top Fox News non-troversies as documented by the Media Matters staff.

Migrants in the caravan

As the midterms approached, Fox News and President Donald Trump engineered a racist controversy over several thousand asylum seekers heading to the southern U.S. border to legally apply for asylum. Conservatives, led by Fox News, fearmongered about the caravan being infiltrated by ISIS and the asylum seekers being infested with diseases like smallpox, leprosy, rabies, and more. Fox figures routinely referred to the caravan as an “invasion” funded by philanthropist George Soros.

On October 27, a white supremacist entered the Tree of Life synagogue in Pittsburgh, PA, and opened fire, killing 11 people. Moments before the massacre, the alleged shooter justified his attack by citing the migrant “invaders” which he claimed were funded by the Hebrew Immigrant Aid Society (HIAS), one of the oldest refugee protection agencies in the country.

It was not very subtle.

In 2016, San Francisco 49ers quarterback Colin Kaepernick began his protest of police violence against the Black community by not standing during the national anthem before games. Since then, the controversy continued to grow as increasingly more players joined the protest in varying forms and Trump continued to highlight them in various tweets. Following Trump’s lead, Fox personalities relentlessly attacked the NFL players protesting police brutality.

On June 22, White House press secretary Sarah Huckabee Sanders was politely asked to leave the Red Hen restaurant in Lexington, VA. Fox News had a reporter giving live updates from the scene four days after Sanders was asked to leave. 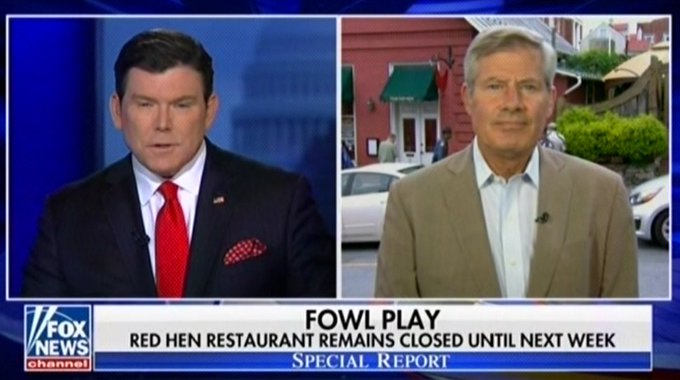 The flag and the moon movie

First Man, released on October 12, depicts the Apollo 11 mission to the moon. Fox News was quick to denounce the movie for not showing an American flag on the moon, with one Fox guest even suggesting that the movie proves that Hollywood is not loyal to America.

Oh, and by the way: The movie has plenty of American flags.

Roseanne Barr, who has a history of racism and peddling conspiracy theories, was fired from her eponymous ABC show for sending a racist tweet regarding Valerie Jarrett, former adviser to President Barack Obama.

In response, several right-wing commentators and Trump supporters came out in Barr’s defense. These figures included conspiracy theorist Alex Jones, singer Ted Nugent, conspiracy theorist Mark Dice, Republican strategist Noelle Nikpour, and many others. Barr’s first interview after being fired was on Sean Hannity’s Fox show, where she was given an opportunity to defend herself. During the interview, Barr insisted that her tweet regarding Jarrett was not racist (while she also said that Jarrett needed a haircut).

In typical Fox News fashion, the network characterized Wolf’s comedic performance as a brutal and direct assault against the White House in general and Sanders in particular. On April 30, Brian Kilmeade characterized Sanders and counselor to the president Kellyanne Conway as “victims” of a cringe-worthy attack. Fox host Bill Hemmer linked Wolf’s jokes about Sanders to the #MeToo movement. Fox News was so obsessed with the controversy that nearly a month after the event, the May 29 edition of Fox & Friends featured three separate segments on Wolf.

In the spring, after the arrest of two Black men in a Philadelphia Starbucks led to protests, the corporation announced “a conversation and learning session on racial bias” for its U.S. employees. Right-wing media immediately complained. Host Tucker Carlson called the anti-bias training a racist attack on white people. Host Laura Ingraham booked an anti-Semitic extremist on her show to whine about it. On Fox & Friends, a Wall Street Journal opinion editor compared the training to “the old Chinese re-education camps.”

Reps. Trey Gowdy (R-SC) and John Ratcliffe (R-TX) claimed on Fox News that in a text message to then-FBI official Lisa Page, then-FBI agent Peter Strzok said that there was an anti-Trump “secret society.” Fox News and right-wing media went overboard to promote the claim; over two days, the phrase was uttered more than 100 times on Fox.

After a few days, ABC News published the full, stand-alone “secret society” text message: “Are you even going to give out your calendars? Seems kind of depressing. Maybe it should just be the first meeting of the secret society.”

It was all in jest; Strzok was being facetious. Fox quickly moved on.

Conservatives' claim that they are being secretly censored

Fox News hosts and contributors consistently pushed the false narrative that conservative voices were being censored on social media.

This sentiment is demonstrably false. To the contrary, conservative meme pages on Facebook are outperforming all political news pages.

In the end, they were only giving her better publicity:

Thank you Fox News for making all the campaign graphics I never knew I needed pic.twitter.com/TtaWR0PsOZ

The reason journos from @FoxNews to @dcexaminer can’t help but obsess about my clothes, rent, or mischaracterize respectful convos as “fights” is bc as I’ve said, women like me aren’t supposed to run for office - or win.

& that’s exactly why the BX and Queens sent me here. https://t.co/t7VBLuyZK3

On October 11, Kanye West visited Trump in the White House and went on a rant in the Oval Office about gun control, North Korea, Saturday Night Live, and even the 13th Amendment. On Fox News, West was hailed as a hero for his pro-Trump stance and the critics were framed as crude or even racist in their criticism.

Girls allowed in the Boy Scouts

In spring 2018, the Boy Scouts of America announced that it would open enrollment to include everyone who wanted to participate -- girls as well as boys. Fox News spent considerable time covering the story, touting the end of days and the end of tradition. On Tucker Carlson Tonight, Tucker Carlson and his guest Mark Steyn bizarrely blamed the Boy Scouts’ decision to be inclusive on sexual assault allegations surrounding Harvey Weinstein and then declared the institution dead.

More than five years after victory was declared in the “War on Christmas,” the war rages on. (America can’t even end its metaphorical wars.)

Fox covered a satirical video about Rudolph the Red-Nosed Reindeer for eight days. Fox also obsessed about a single radio station no longer airing the song “Baby, It’s Cold Outside” due to its undertones of sexual coercion. Laura Ingraham expressed outrage at a nativity scene featuring a caged baby Jesus, which was meant to criticize treatment of migrant children at the border. Of course, Ingraham has also likened those cages to “summer camps.”