Woke Bill Kristol is among us once more. The neoconservative founder of The Weekly Standard and one of the leading promoters of the Iraq War during the 2000s and opponents of health care legislation during the 1990s is in the process of reinventing himself for the new political reality. And so we get headlines like this morning’s CNBC.com gloss on a long interview Kristol gave John Harwood, which all but declare him a leader of #TheResistance: “Bill Kristol was once the voice of the Republican Party. Now he's one of [President Donald] Trump's biggest opponents.”

This is a dramatic overstatement of Kristol’s current role in the body politic, which revolves largely around being able to convince MSNBC hosts that he remains relevant. “I'm a conservative who's been mugged by Trump,” Kristol tells Harwood. And it’s true -- like many of his ilk, Kristol has seen a steady decline in his own power over the past few years, as Trump took over the Republican Party and media figures who were willing to support him rose in prominence.

The interview -- several thousand words split across four articles -- is a surreal read. Harwood points out various ways in which moves that establishment Republicans like Kristol made had paved the way for Trump, and Kristol repeatedly tip-toes up to the recognition that he’s devoted his life to empowering a movement that has cast him and his priorities aside in favor of a racist demagogue.

At one point, Kristol even says he is “a little bit” responsible for creating the conditions that led to Trump, admitting that “the Iraq War didn't go the way I and many others hoped” and that his support for Sarah Palin as Sen. John McCain’s vice presidential nominee in order to “channel a certain kind of populism” had backfired. But then he washes his hands of it all, saying that “one can over explain these things and over-interpret these things” and that “it just turned out that Trump was a very effective demagogue coming along at the right time in the right circumstances.” He later explains, “I don't think Palin really led to Trump. Was this somehow a bit of a precursor or something? I'm willing to say, ‘Maybe so.’”

But the crux of this argument, and the point where it becomes clear that Kristol is rewriting history in a way that burnishes his own image, comes when Harwood asks him to discuss the state of the conservative media, particularly Fox News, where Kristol spent a decade as a contributor.

“I was on Fox for 10 years really, 2002 to 2012,” Kristol says. “I think it was pretty good. It was a little tilted right? Sure.” It was only after he left, Kristol suggests, that the network went south (“75 percent of it seems to be birther-like coverage of different issues,” per Kristol), which he chalks up in part to the network responding to the Obama administration becoming “more left wing in 2013.” On Morning Joe today, Kristol made similar comments, saying that Fox founder Roger Ailes wouldn’t recognize what’s going on on Fox and that “what fringy websites once said is now said by Fox News hosts.”

This argument is transparently self-serving nonsense. At best, Kristol was blissfully unaware of what was airing on Fox while he was working there. At worse, he is looking for credit with liberals by taking a shot at the conservative network’s current coverage while simultaneously claiming that his own hands are clean.

Fox’s recent programming -- which seems overwhelmingly devoted to sycophantic coverage of the president and repeated suggestions that he purge the government and remake it in his own authoritarian image -- is terrifying. But the network’s coverage during President Barack Obama’s first term, when Ailes reportedly remade Fox into “the Alamo,” was horrific in its own way.

I’ve never seen anything quite like the first days of the Obama administration, as a major news network warned its audience, day after day, that the newly-elected president was about to institute some sort of Marxist-socialist-fascist slave state.

The situation didn’t improve in the years to come, with the network’s coverage frequently revolving around violent rhetoric and paranoid conspiracy theories. Fox News championed the lie that Democratic health care legislation included “death panels,” became a one-stop-shop for Trumpian birtherism, peddled the lie that Obama was secretly a Muslim, and fueled a variety of other racist lies about him.

And of course, this was the era of the titan of populist conspiracy theorizing, Glenn Beck, who was hired by Ailes after Obama’s election and spent the next three years scrawling insanity across chalkboards in his network studio.

Here are a few screengrabs from this period, during which Kristol was cashing checks from a network that was “a little tilted right”: 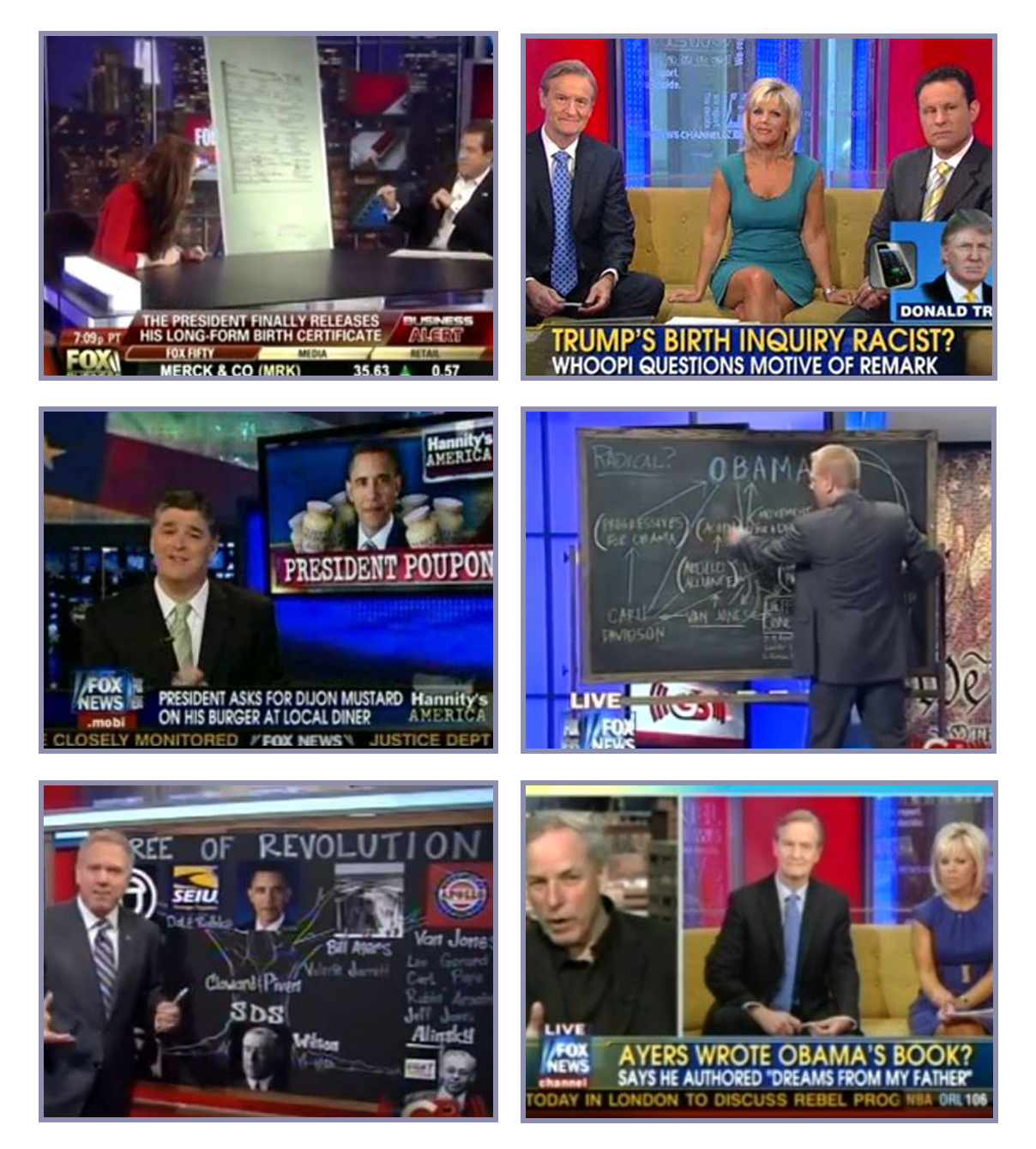 My sense is that Fox did become noticeably more conspiratorial in the days after Obama’s election, helping conservatives build up a tolerance and even an expectation of unhinged behavior that paved the way for the rise of Trump.

But then again, that period also coincides with my own increased consumption of the network’s programming.

The years leading up to Obama’s election featured Sean Hannity suggesting that Bill and Hillary Clinton may have murdered a White House aide and the hosts of Fox & Friends falsely claiming that Obama had been educated in a madrassa. And well before that, the network was a staunch supporter of myths Kristol is likely more willing to forgive -- namely, ones that led to the invasion of Iraq.

Many Americans are disturbed that the Republican Party elevated a racist demagogue to the presidency. Some of them are even GOP stalwarts. But if those anti-Trump conservatives paint him as an anomaly rather than acknowledging that he took advantage of circumstances created by the party and its media apparatus, they don’t have much to offer to the debate. They may be willing to criticize the president, but once he’s gone they’ll go right back to laying the groundwork for the next Trump.