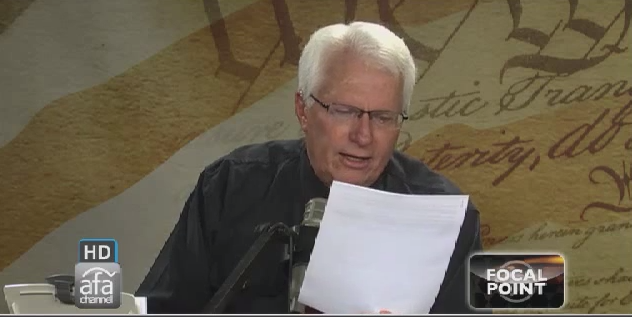 On January 14, Ablow published an ill-informed, transphobic rant against California's new law allowing transgender students to use facilities and participate in programs that match their gender identities. Disregarding the positions of the American Psychiatric Association and the American Psychological Association, Ablow wrote that he simply doesn't “believe” that it's possible for someone to identify with a gender different from his or her sex at birth.

Two days later, Fischer voiced the same view on his show, reading from Ablow's column and extolling his credentials as a supposed expert on the issue.

From the January 16 edition of American Family Radio's Focal Point:

FISCHER: We're gonna bring this in, because this is a piece written by Dr. Keith Ablow. He's a psychiatrist. You see him on Fox News all the time, he's part of the Fox News “Medical A Team,” and he writes about this bathroom bill. Now this guy is a psychiatrist - that means he's a medical doctor. He's an M.D. And he writes about his analysis of this bill. ... And Keith Ablow has a good piece about how destructive this is.

This isn't the first time that AFA - a Southern Poverty Law Center-designated anti-gay hate group -- has taken its bigoted talking points from Fox. In 2011, Fischer cited Ablow's condemnation of Chaz Bono's appearance on ABC's Dancing with the Stars while arguing that transgender people should be criticized rather than celebrated on television.

That Fischer is once again relying on Ablow's misinformed medical opinion highlights the dangers of granting pseudoscientists a national platform to comment on LGBT issues. Keith Ablow's rabidly transphobic positions might not be taken seriously by real medical experts, but his veneer of credibility as a member of Fox's “Medical A Team” serves to legitimize the hateful work of groups like the AFA.

The relationship between Fox and AFA is anything but a one-sided affair. Last fall, Fischer praised the network for its “very friendly” coverage of the AFA after the network's Megyn Kelly, Steve Doocy, Brian Kilmeade, and Elisabeth Hasselbeck whitewashed the group's record of anti-LGBT extremism.