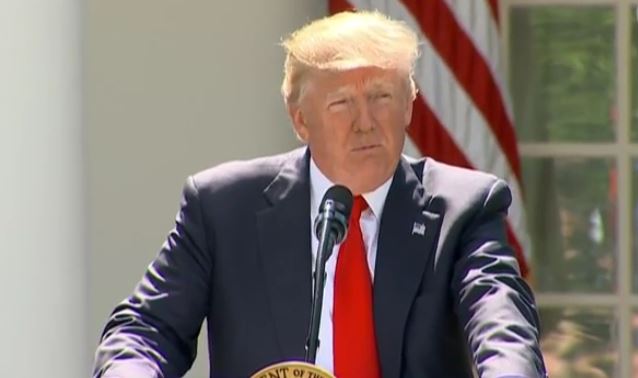 Lying about public policy has become standard practice for the Trump White House, as well as leaders of the Republican Party. There seems to be no baseless claim this administration isn’t willing to make.

That dark trend was on display last week in the White House Rose Garden when President Donald Trump announced he was beginning the process of withdrawing the United States from the Paris climate accord. Trump’s supposed reasoning for abandoning the deal was built in part around widely disputed claims that the accord was a jobs killer for the United States.

But there was one claim that seemed to occupy a separate category: It was a pure fabrication about a supposed “slush fund” that had been created around the Paris agreement -- a “slush fund” the United States was flushing billions of dollars into for other countries to spend. (Naturally, far-right sites and right-wing Twitter loved the “slush fund” claim.) Just more everyday lies, right? But taking a step back, there seemed to be something odd about the White House using its Twitter feed days after the Paris announcement to push out a choreographed lie about the climate accord that could be, and would be, easily debunked. Actually, the tweet managed to include two separate lies within the confines of 140 characters.

As ProPublica noted, “1)It is not a slush fund. 2)The fund was not created by the Paris Agreement.” (Here is the whole ProPublica Twitter thread detailing the White House’s casual mendacity regarding the historic climate agreement.)

In a piece published by The Washington Post, Matthew J. Kotchen, Yale professor of economics – and former deputy assistant secretary of energy and the environment for the U.S. Treasury Department during the Obama administration -- called Trump “astonishingly misinformed” about the slush fund claim. “Nearly everything Trump said about the Green Climate Fund to justify his decision was wrong or misleading.”

But I suspect the White House didn’t create a days-long “slush fund” campaign because the administration was “misinformed.” It did so seemingly because administration officials wanted to spread a lie and because they seem to be in the propaganda business (not the public debate business). Increasingly, this White House’s propaganda operation looks like an authoritarian one found in other countries, such as Russia.

And how about this for creating an alternative reality built on specious narratives and fake news? On Monday, after the president announced plans to privatize the U.S. air traffic control system, he and Republican members of Congress then staged a faux bill-signing ceremony in the East Room of the White House. There, supportive politicians gathered around the seated president, who signed nothing more than a letter to Congress stating his support for the proposal. The whole event was just Kabuki theater.

Also note that when Trump traveled to Saudi Arabia last month, the White House loudly trumpeted the news that it had brokered a $110 billion arms sale to the Middle East power, which the press covered as news.

But the deal reportedly doesn’t actually exist. It’s “fake news,” according to Bruce Riedel at the Brookings Institution. “I’ve spoken to contacts in the defense business and on the Hill, and all of them say the same thing: There is no $110 billion deal. Instead, there are a bunch of letters of interest or intent, but not contracts.”

These instances go far beyond stagecraft and simply trying to create the best optics possible. Instead, this feels more like the latest shift by the Trump administration into permanent propaganda warfare. And that puts the Beltway media in the crosshairs of this White House’s unprecedented misinformation machinery.

Government-sponsored propaganda isn’t supposed to work in a vibrant democracy where openness flourishes, mostly because a free press is positioned to deter and undercut those kinds of heavy-handed attempts. But Trump’s brand could work for two reasons.

First, if the mainstream news media is too timid in calling out Trump’s endless deceits, that gives him room to operate. Overly concerned with not appearing to be biased, and routinely giving Republicans far too much space to operate dishonestly, the press in 2017 has shown too much deference to the administration’s radical brand of misinformation.

“The tell-both-sides media attitude that generally works in the free world falls apart completely when dealing with a dictatorship that doesn’t operate in good faith, that lies and actively fabricates constantly,” Garry Kasparov recently told the Columbia Journalism Review. Kasparov is a former world chess champion who today serves as a Russian pro-democracy leader and chairman of the Human Rights Foundation.

Second, like Russia’s president, Trump has a built-in media infrastructure that will obediently echo his lies and present them as news. For Putin, state-run outlets such as RT (formerly known as Russia Today) and Sputnik serve as a constant, unapologetic mouthpiece for the Kremlin.

Obviously, the free press in the United States doesn’t serve at the pleasure of the president. But there is a branch of media that does.

Meaning, if the Trump White House pushes out propaganda lies and orchestrated campaigns, and Fox News as well dozens of right-wing sites and established AM talk radio all treat it as factual information, that automatically gives the misinformation the sheen of legitimacy for some consumers. And that means Trump’s all-believing base will buy the claims no matter what, simply because they’re both coming from Trump and they’re presented as factual by Trump’s loyalist media.

So yes, authoritarian propaganda can work in this country, especially if the White House’s nonstop efforts to discredit the legitimate press among its supporters succeed -- if Trump is successful in sowing the seeds of a chaos culture, or the “fog of unknowability,” as former Russian TV producer Peter Pomerantsev calls it in Mariani's Vanity Fair piece.

“The Kremlin does this by flooding television and digital media with biased coverage and wanton spin,” wrote Mariani. “The Trump administration has discovered something equally effective: lying to reporters and publicly attacking critics are like tossing grenades into the media eco-system. The press is constantly scrambling to respond to a never-ending river of slime, and the system is gradually overwhelmed.”

The Trump White House lies will continue indefinitely. Increasingly, they should be viewed as a crucial piece of the administration’s permanent propaganda campaign.