Fox News and Fox Business have been promoting a debunked annual report from the fossil fuel front group Competitive Enterprise Institute (CEI), which claims that federal regulations cost the economy nearly $1.9 trillion each year. But the study has been roundly discredited and debunked, and it is being touted while CEI is under fire for its role in helping fossil fuel companies -- which would benefit from reduced federal regulations -- deceive the public on climate change.

Competitive Enterprise Institute Report Claims Federal Regulations Cost Economy Nearly $1.9 Trillion In 2015. On May 4, CEI released its annual “Ten Thousand Commandments” report, which it claims “explains the hidden compliance burden of regulation.” It asserts that federal regulations and intervention have posed a “$1.885 trillion hidden tax on American consumers and the U.S. economy in 2015,” amounting to “nearly $15,000 per U.S. household each year.” [Competitive Enterprise Institute, 5/4/16]

Fox Aired Repeated Segments Uncritically Promoting Study. Fox News and Fox Business aired nearly identical segments touting CEI’s report a total of five times. Fox News correspondent Shannon Bream warned on the May 4 edition of Fox News’ Special Report that “the number of rules and regulations coming from unelected government employees has skyrocketed in recent years” and asserted that federal regulations cost American households $15,000 per year, with the collective cost in 2015 amounting to “more than a combination of both corporate and individual taxes the IRS is set to collect for 2015.” She aired a clip of CEI vice president for policy Clyde Wayne Crews, who asserted that federal agencies are “working beyond the normal lawmaking process.” Similar reports aired on the May 4 edition of Fox News’ Happening Now and Fox Business’ After the Bell, Countdown To The Closing Bell with Liz Claman, and The Intelligence Report with Trish Regan.

CEI Report Panned For Methodological Flaws And Not Including Benefits Of Regulations, Which Have Been Shown To Outweigh Costs

The Washington Post's Fact Checker Blog: CEI Cost Figure Has “Serious Methodological Problems,” Is “Misleading.” The Washington Post's Fact Checker blog criticized Republican members of Congress for citing the 2014 edition of the CEI report, stating that CEI’s claim that regulations pose a $15,000 burden on households "has serious methodological problems.” The blog also noted that the report itself admits it is “not scientific” and said it was “misleading” to cite this figure “without realizing its limitations or even admitting that there are indeed benefits that might offset at least some of the costs.” It also noted that CEI does not include any benefits in its analysis, calling that a “huge element missing” from the report. From the January 14 Fact Checker blog post:

But there is one huge element missing—the benefit side of the analysis. The report concedes that the $1.8 trillion figure purposely does not subtract any potential benefits from regulations. But that’s unbalanced. Every regulations has costs—but also benefits.

Look at cars, for example. Seat belts are a regulation, but they also result in fewer deaths, which is presumably a benefit. Higher fuel-economy standards raise the initial cost of a car, but also result in savings on gasoline over time. (Note: We have previously faulted President Obama for touting the benefits of fuel-economy standards, without mentioning the costs.)

It could well be that the costs exceed the benefits (though the annual Office of Management and Budget annual report on the issue frequently shows benefits far exceeding costs) but it seems to make little sense to completely ignore the cost side of the ledger. The “Costberg” report makes impassioned defense of the need not to consider benefits, but also, somewhat tongue in cheek, admits its tally consists of “apples and oranges,” “haphazard distinction between consumer and employer impacts,” “old data sets” and the like.

In other words, the number is simply an idiosyncratic guesstimate. [The Washington Post, Fact Checker, 1/14/15]

Policymakers and the media would do well to ignore this report.

The report's findings appear to be based on several inflated regulatory cost estimates, lined up and added together to produce exactly what the author likely intended: a huge number. Some of the numbers come from estimates produced by regulatory agencies themselves, which several retrospective studies have shown to be systematically inflated. Others come from individual reports assembled by the author. To the extent that the CEI report is based on several different sources that relied on a variety of different methodologies, there is a large possibility that simply adding them up will result in a lot of double counting, further inflating the CEI report's conclusion. The author of the CEI report, however, appears to make no effort to address this problem either. [Center for Progressive Reform, 5/13/15]

NYU's Michael Livermore: CEI Report Is More “An Opinion Piece Than It Is An Analysis.” Michael Livermore, senior adviser at New York University's Institute for Policy Integrity, told Media Matters in 2015 that the 2014 edition of CEI’s report “doesn't even attempt to be a scientific analysis.” Livermore explained that “a huge chunk” of study author Clyde Wayne Crews Jr.’s “estimates” are from a 2001 report by the U.S. Office of Management and Budget (OMB), which Livermore said was discontinued because ”the methodology was thought to be so unreliable." According to Livermore, CEI “takes that number and updates it to current dollars.” Livermore explained the report's flaws further:

The old, outdated OMB report is a huge percentage of the total that [Crews Jr.] actually finds ... and then he adds to that an estimate of what paperwork requirements are, and he multiplies that by an hourly figure, and then he uses the annual OMB reports that come out.

This idea that we're going to look at all regulations collectively, including regulations that have been on the books for decades, and think about their ongoing costs without thinking about their benefits is very silly.

It's not clear that he's actually telling us anything about what the benefits would be about rolling back those rules. It's just not very informative of regulatory policy.

It's more in the nature of an opinion piece than it is an analysis that's new. I wouldn't make any bets about this being even a roughly accurate approximation of what costs are and I'm not even sure that it's telling us anything meaningful. [Media Matters, 5/14/15] 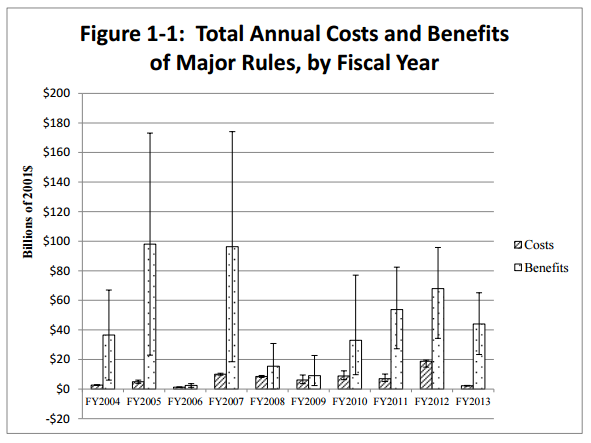 Livermore And NYU’s Richard Revesz: Cost Of No Regulation Is “Steeper Than The Cost Of Regulating.” In a Huffington Post piece co-authored with Richard Revesz, the director of New York University’s Institute for Policy Integrity, Livermore detailed some of the ways that regulations provide immense benefits, concluding that, when “compared to the price of weak regulation,” regulations are “often bargains that avoid more serious monetary and social expenses”:

In November 2010, EPA and the National Highway Transportation and Safety Administration issued a joint rulemaking to regulate pollution from large pickups and vans, vocational vehicles, combination tractors, and heavy-duty engines. These proposed standards are estimated to cost about $7.7 billion, yet they will generate almost 7 times as many benefits ($49 billion).

When we tally all of the costs of pollution, it is often the case that the price [of] regulation is far less than the social cost of unchecked emissions.

In these cases, as in so many others, economics shows that stronger protections can be justified -- that the hidden costs of dirty air or unsafe prisons impose a price that is steeper than the cost of regulating.

Strong protections do cost businesses and taxpayers money, but when compared to the price of weak regulation, it turns out that they can be more than worthwhile. After giving them a closer look, regulations that might seem unaffordable are often bargains that avoid more serious monetary and social expenses. [The Huffington Post, 2/23/11]

CEI Under Fire For Its Alleged Role In “Exxon Knew” Scandal

Attorneys General Are Investigating Whether Fossil Fuel Companies Intentionally Deceived The Public On Climate Change. In recent months, reports from InsideClimate News and the Los Angeles Times showed that Exxon’s own scientists had confirmed by the early 1980s that fossil fuel carbon pollution was causing climate change, yet Exxon funded organizations that helped manufacture doubt about the causes of climate change for decades afterward. This has prompted multiple inquiries to investigate Exxon’s activities, including the U.S. Justice Department forwarding a request to the FBI’s criminal division to determine whether Exxon violated federal laws by “failing to disclose truthful information” about climate change. The attorneys general in New York, California, Massachusetts, and the U.S. Virgin Islands have each launched investigations into the Exxon scandal. Most recently, an even larger coalition of attorneys general committed to holding fossil fuel companies, including Exxon, accountable if they obfuscated climate change research in order to protect their financial interests. [Los Angeles Times, 10/23/15; InsideClimate News, 9/16/15; 3/2/16; 3/30/16; U.S. News & World Report, 3/29/16]

U.S. Virgin Islands Attorney General Investigating CEI's Role In Scandal. As part of his own investigation of Exxon, the U.S. Virgin Islands’ attorney general is subpoenaing CEI and many other industry front groups for documents and communication records on climate change. As InsideClimate News explained, Exxon worked to “undermine the scientific consensus, in part by financing research organizations including CEI.” Further from InsideClimate:

CEI is one of several organizations that have been repeatedly named over the years by those who have criticized Exxon and other fossil fuel companies for financing the climate denial work of third parties. After the Royal Society of the United Kingdom castigated Exxon in 2006 for giving money to groups misrepresenting climate science, Exxon said it had stopped financing the CEI.

Additionally, the Climate Investigations Center (CIC) uncovered that the year after CEI received $270,000 from Exxon for “General Operating Support,” CEI released a climate science-denying TV commercial with the tag line: “Carbon Dioxide: They Call it Pollution, We Call it Life.” CIC stated that the commercial “caused such an outcry, we believe it triggered ExxonMobil to cut funding to CEI altogether.” [The Washington Times, 5/3/16; Subpoena from the U.S. Virgin Islands Department of Justice, accessed 5/5/16; InsideClimate News, 4/8/16; Climate Investigations Center, 11/12/15]

CEI Backed By Multiple Fossil Fuel Companies, Including Exxon. CEI has received funding over the years from ExxonMobil, Texaco, and the family foundations of the billionaire Koch brothers -- Koch Industries, a family-owned conglomerate, is heavily invested in fossil fuels. Past sponsors of CEI’s annual fundraising dinners include Murray Energy, Arch Coal, Marathon Petroleum, Devon Energy, Phillips 66, the American Petroleum Institute, and the American Coalition for Clean Coal Electricity. It has also received over $6 million from DonorsTrust and Donors Capital Fund, two dark money groups largely backed by the Kochs, according to data compiled at ConservativeTransparency.org. [Media Matters, 7/31/15; ConservativeTransparency.org, accessed 5/6/16]

Several Oil Industry Donors To CEI Have Fought Regulations On Climate Change. InfluenceMap, a United Kingdom-based nonprofit that uses objective metrics to track corporate positions on climate change, has shown that many major fossil fuel companies have obstructed government regulations that would address climate change. Among the corporations it found most obstructive were ExxonMobil, which it stated “has been at the forefront of efforts to mislead public knowledge on the science in order to stifle and delay climate-driven regulations”; Phillips 66, which “appear[s] to have a generally obstructive engagement with strands of climate change regulations”; and Koch Industries, which “appears to be actively opposing almost all areas of climate legislation.” [InfluenceMap.org, accessed 5/6/16; ExxonMobil accessed 5/6/16; Phillips 66 accessed 5/6/16; Koch Industries accessed 5/6/16]