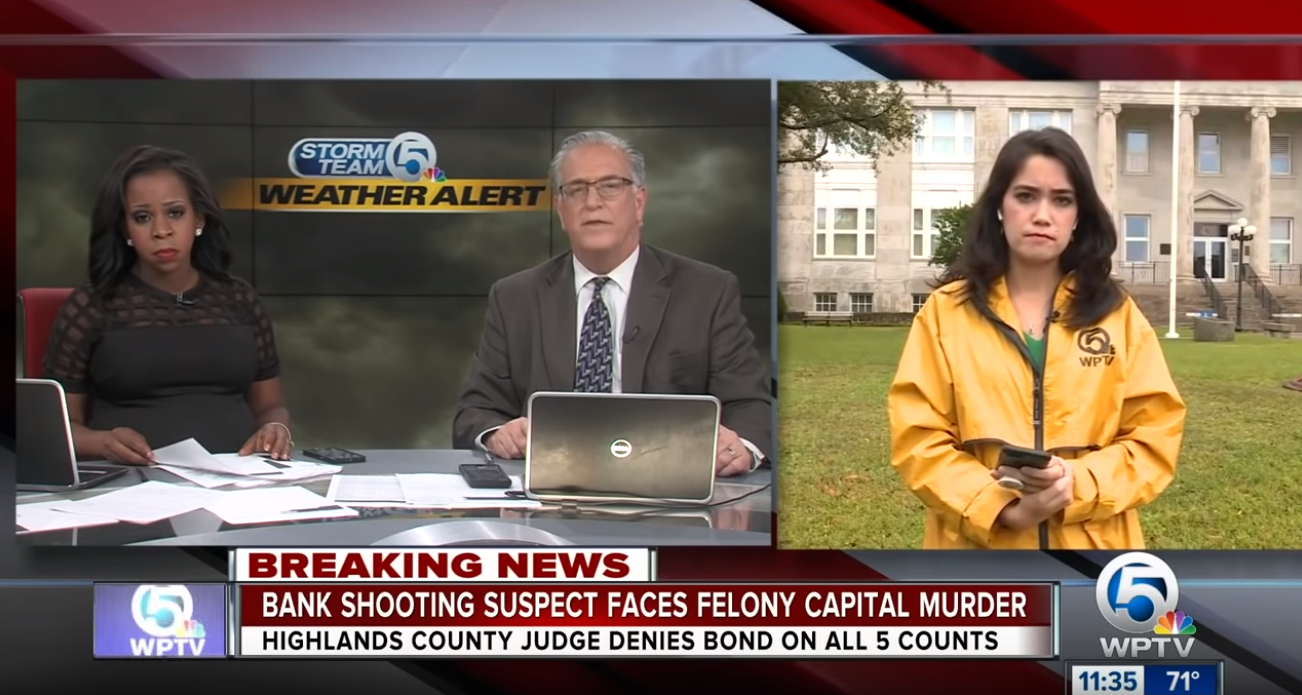 In the span of only a few days last week, three shooters killed a total of 14 people in three separate mass shootings in Florida, Georgia, and Louisiana -- but you might not have heard about these incidents at all if you watched cable news. The shootings were barely discussed on the major cable networks, and the minimal coverage quickly faded away within days.

On January 23, five women were killed in a SunTrust bank in Sebring, FL, after a 21-year-old gunman walked in and reportedly “shot every person he encountered.” The gunman then called the police himself and surrendered to a SWAT team after a brief standoff. He is now charged with five counts of capital murder for the deaths of Ana Piñon-Williams, Marisol Lopez, Cynthia Lee Watson, and two other victims who have not been named.

In the days following the public mass shooting, cable news devoted scant coverage beyond mentioning the incident in headlines. From January 23-26, CNN, Fox News, and MSNBC together covered the shooting for just over 20 minutes, including reading headlines and short teasers. The majority of the coverage occurred the day immediately after the incident. Fox News devoted about 12 minutes in total to the shooting, followed by CNN with just over 7 minutes, and MSNBC with only 22 seconds.

The next day, January 24, a gunman in Rockmart, GA, killed four people -- Helen Rose Mitchell, Jaequnn Davis, Arkeyla Perry, and Dadrian Cummings -- and injured one more before fleeing to Indianapolis, IN, where he was taken into custody. The Polk County coroner said it was the worst crime experienced by the local community and compared the shootings to an “execution.”

Only two days later, on January 26, another 21-year-old gunman fatally shot his parents, Elizabeth and Keith Theriot, in Ascension Parish, LA. The gunman then drove 30 miles northeast to Livingston Parish and allegedly fatally shot his girlfriend, Summer Ernest, along with her father, Billy Ernest, and brother, Tanner Ernest. A manhunt ensued before he was apprehended in Richmond County, Virginia on January 27. The Ascension Parish sheriff called the pair of shootings “one of the worst domestic violence incidents I’ve seen in quite a while.”

Yet the major cable news networks devoted similarly little coverage to the Louisiana shootings beyond immediate breaking news headlines. All together, CNN, Fox News, and MSNBC again spent just over 20 minutes covering the incident, including reading headlines and short teasers, in the the three-day window following the shootings. From January 26-29, CNN gave the incident just over 11 minutes of coverage, followed by Fox with a little more than 9 minutes, and MSNBC with only 24 seconds.

While both CNN and Fox did mention the sheriff’s statement that the shootings were considered “domestic violence incidents,” none of the minimal coverage of the Louisiana shootings provided viewers with any context about the well-documented links between easy access to firearms, domestic violence, and mass shootings. Here are some of the relevant facts they could have mentioned:

Media Matters searched SnapStreamHD for “shoot” OR “shot” OR “gunman” OR “kill” or “Florida” OR “Sebring” OR “SunTrust” after January 22. All mentions of the shooting were timed, including teasers, headlines, and full segments.

Media Matters searched SnapStreamHD for “shoot” OR “shot” OR “gunman” OR “kill” OR “Rockmart” OR “Georgia” OR “Indianapolis” OR “Polk County.” All mentions of the shooting were timed, including teasers, headlines, and full segments.

Media Matters searched SnapStreamHD for “shoot” OR “shot” OR “gunman” OR “kill” OR “Louisiana” OR “Virginia” OR “Livingston” OR “Ascension” after January 25. All mentions of the shooting were timed, including teasers, headlines, and full segments.