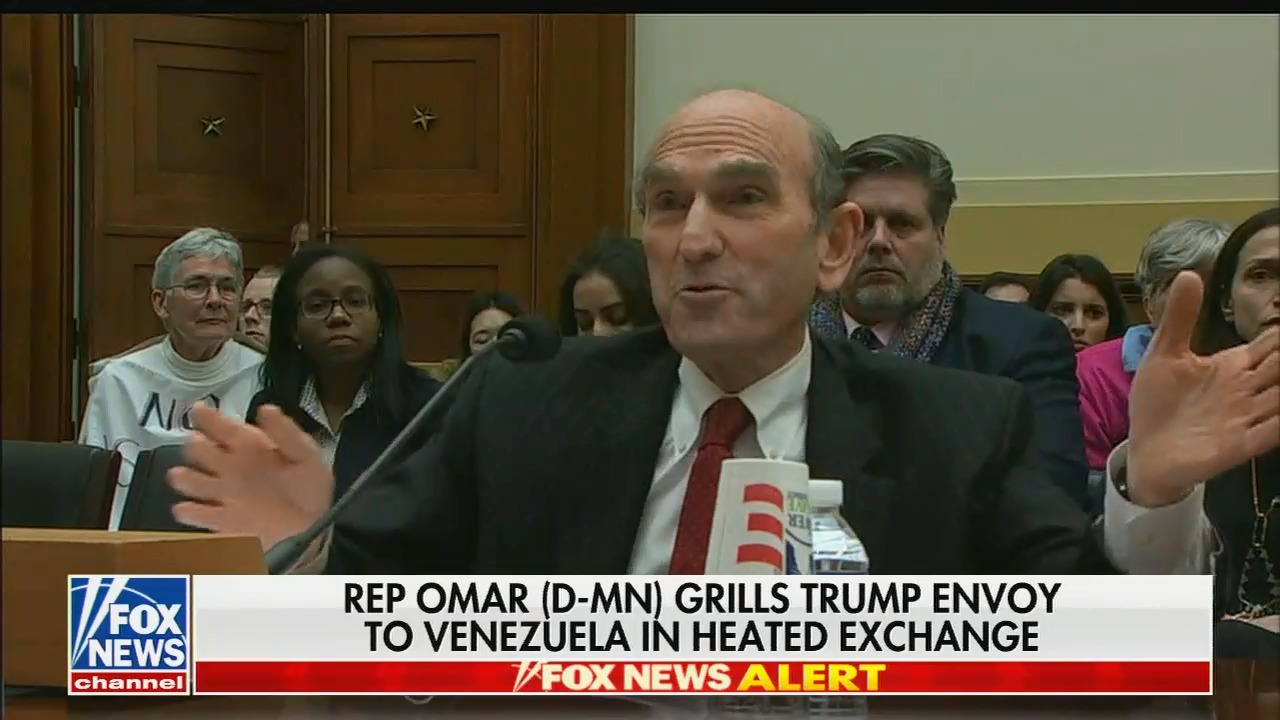 Elliott Abrams, President Donald Trump’s pick to help lead the administration’s response to the Venezuelan political crisis, appeared before the House Foreign Relations Committee on February 13 and was sharply questioned by Rep. Ilhan Omar (D-MI) about his activities in Latin America for the Reagan administration.

Abrams was a key figure in the Iran-Contra scandal, the Reagan administration’s secret funding of right-wing rebel groups and anti-communist death squads known as “Contras” in Nicaragua via revenue from illegal arms sales to Iran. Abrams was convicted of withholding information from Congress “about secret government efforts to support the Nicaraguan contra rebels during a ban on such aid,” though he was eventually pardoned by President George H.W. Bush.

Abrams also helped cover up a 1981 Salvadoran government massacre of nearly 1,000 civilians. At the time of the massacre, the U.S. was “sending the Salvadoran military a million dollars a day.” Abrams told Congress that the massacre reports “were not credible” and being “significantly misused, at the very best, by the guerrillas.” In 1993, Abrams asserted that “the administration's record in El Salvador is one of fabulous achievement.” More recently, he was reportedly involved in the failed 2002 coup attempt against former President Hugo Chavez in Venezuela -- the same country he is now tasked to help with humanitarian aid in the midst of a massive political crisis.

Despite Abrams’ extensive and well-documented record of disastrous interventions in Latin America that merit serious criticism, right-wing media figures defended Abrams, calling him “a dedicated voice for repressed communities” and saying he had returned to the government to “try to help free people from socialism.” Even though Abrams may have “had to do some extreme work” to fight communism, his conservative media defenders insisted that he’s a “pure gentleman” and “a leading advocate of human rights.”

Fox & Friends co-host Brian Kilmeade: “There was a communist infiltration in the 1980s. And Donald (sic) -- President Reagan wasn't going to have it. He was going to make sure that the Russians, and then the Soviets, were not going to infiltrate and take over our hemisphere. So to do that you had to do some extreme work.”

Fox host and former George W. Bush press secretary Dana Perino: “I would like to defend Elliott Abrams. This is a guy who is a total gentleman, a patriot, a public servant who is willing to go back into government to try to help free people from socialism.”

Pro-Trump commentator Matt Schlapp: “Elliott Abrams … was in the Reagan administration fighting the spread of communism, socialism in Central America, and he got caught up in a politicized prosecutor.”

National Review’s Jay Nordlinger: Abrams “has been championing freedom and human rights his entire life (and taking unholy sh** for it from the illiberal Left and Right).”

Nordlinger: Abrams “has been a devotee of liberal democracy and the American interest his entire career. He was a Reaganite when it was cool and (crucially) after.”

The Heritage Foundation’s Ana Rosa Quintana: “Elliott Abrams is a patriot and dedicated voice for repressed communities, including as a member of the United States Holocaust Memorial Council.”

The Weekly Standard’s Kelly Jane Torrance complained that Omar’s line of questioning to Abrams was simply “rehashing things that happened many years ago” while denying Abrams “a chance to give the information he’s there to give.”