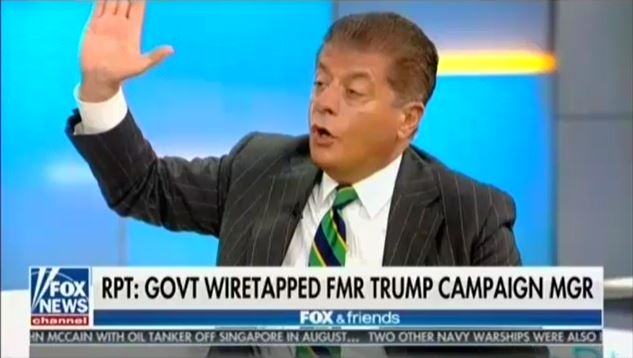 Fox News senior judicial analyst Andrew Napolitano did a rare thing today: He apologized for a claim he made on air. Napolitano had previously suggested that former FBI Director James Comey had committed a crime by sharing memos detailing his meetings with President Donald Trump with a friend. Fox has now confirmed that the friend had the necessary clearance to view the materials, which prompted Napolitano to apologize. But Napolitano’s (wrong) accusation follows a pattern; much of his recent “legal analysis” has involved baselessly speculating about misconduct by various current and former government officials, most of which ultimately somehow victimizes Trump.

On April 24, Fox News reported that Daniel Richman, the recipient of Comey’s memos who then shared some of their contents with the media, confirmed to its reporters that he was a special government employee (SGE) and that he had clearance to view classified materials. The next day on Fox’s Outnumbered, Napolitano apologized for previous speculation that Comey had committed a crime:

ANDREW NAPOLITANO: It appeared when the memos were released, these are the seven memos that Jim Comey wrote about his interactions with the president, some of which had blacked out, that turns out that they had classified materials in them and I owe Jim Comey an apology because I said if this stuff had classified materials in it and he gave it to the professor, that is a crime, to fail to secure state secrets if they were properly classified. Now it turns out that the professor had a security clearance. So there was no crime, Mr. Comey, and I apologize. I was wrong.

But for at least a year, Napolitano’s specialty has been to cherry-pick facts or take advantage of partially reported stories with incomplete information to argue that Trump is actually the victim of misconduct from other current and former government officials. While law enforcement and government officials certainly are not infallible, the baseless -- and often demonstrably incorrect -- way that Napolitano tosses out his accusations has been, for lack of a better word, absurd.

Of course, even as Napolitano levies charges at anyone in sight, he’s excused any potential evidence suggesting wrongdoing on Trump’s part. Just in the last few months, he’s dismissed reports that Trump may have improperly influenced then-acting FBI Director Andrew McCabe by asking how he voted in the 2016 presidential election and reports that Trump may be tampering with witnesses in the investigation of his campaign by asking them about their testimony.