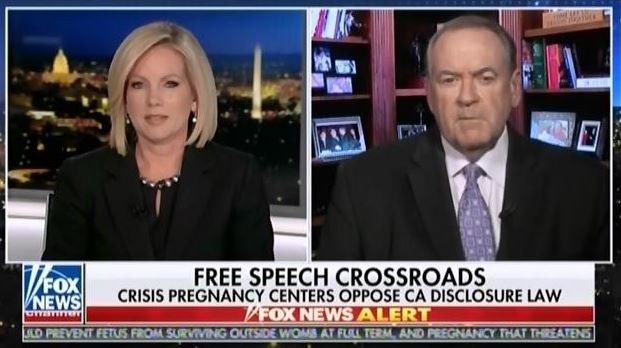 The inaccurate notion that abortion is an unsafe or “risky” medical procedure was put to rest this month, with the release of a new report from The National Academies of Sciences, Engineering, and Medicine (NASEM), The Safety and Quality of Abortion Care in the United States. But as usual, Fox News didn’t let facts stand in the way of a sensationalist segment attacking abortion as unsafe.

Following Supreme Court oral arguments in National Institute of Family and Life Advocates (NIFLA) v. Becerra -- a case involving a California law attempting to regulate the deceptive practices of anti-abortion fake health clinics -- Fox News’ Shannon Bream hosted commentator and former presidential candidate Mike Huckabee. During the March 20 segment on Bream’s show Fox News @ Night, Bream and Huckabee took a rapid detour from the specifics of the California case to mislead audiences about the overall safety of abortion. According to Huckabee, abortion “has a detrimental effect on health of women, both physically and emotionally.” He continued:

And I try to say if, so many times, if there's two victims in every abortion, one is the baby and the other is that -- a birth mother who may have been talked into this by some provider because it's good business for them. Maybe by a boyfriend, a husband, a mother, a grandmother, or a good friend. But they're not telling them the full picture, either what this is doing to them physically or emotionally for the short as well as for the long term.

In reality, Huckabee’s assertions about the safety (and the alleged negative effects) of abortion could not be further from the truth. In the March 16 report, NASEM “assessed the quality of abortion care with respect to the six attributes of health care quality: safety, effectiveness, patient-centeredness, timeliness, efficiency, and equity” and found that “legal abortions—whether by medication, aspiration, D&E, or induction—are safe. Serious complications are rare and occur far less frequently than during childbirth.” According to an analysis of the report from Women’s Health magazine, researchers found:

Notably, NASEM also concluded that the restrictions passed by anti-choice lawmakers “create barriers to safe and effective care.” As the press release for the report stated, “These regulations may prohibit qualified providers from performing abortions, misinform women of the risks of the procedures they are considering, or require medically unnecessary services and delay care.”

Even without these harmful regulations, the economics of abortion access greatly disadvantage already marginalized communities. Salon’s Christina Cauterucci wrote in 2016, “Studies show that poor women take up to three weeks longer than other women to secure an abortion” partly because of the time necessary to gather the money for the procedure. She continued that “the further along the fetus, the more expensive her abortion will be and the more likely she is to experience health complications.” Financial and other barriers, such as the restriction on federal funding support for abortion care (thanks to the Hyde Amendment), ineffective mandatory waiting periods, forced ultrasounds, and more, put early access to abortion care out of reach for many.

Despite an ongoing effort by right-wing media and anti-abortion lawmakers alike to attack abortion as unsafe, NASEM’s comprehensive assessment underscores the realities that it is a safe medical procedure, and that attempts to regulate abortion in accordance with ideology has an undeniably harmful effect on patients.