An anti-gay pundit who used his recent appearance before a House subcommittee to champion “ex-gay” therapy is a repeated Fox News guest who has used his position at the right-wing Liberty Counsel to wage ridiculous attacks on progressives and LGBT equality.

In an exchange with Rep. Jerrold Nadler (D-NY) during that same hearing, Staver grasped at straws as he attempted to defend anti-gay business discrimination:

That performance was par for the anti-gay course for Staver and his organization. Liberty Counsel - an affiliate of the Jerry Falwell-founded Liberty University - is a “nonprofit litigation, education, and policy organization” that specializes in baseless claims about supposed threats to religious liberty, routinely championing even the most fringe anti-gay causes under the guise of protecting religious freedom.

To Staver, at stake in the battle against LGBT equality is nothing less than the survival of Western civilization. In 2011, he declared that "[w]e are facing the survival of Western values, Western civilization. ... One of the most significant threats to our freedom is in the area of sexual anarchy with the agenda of the homosexual movement, the so-called LGBT movement."

For Staver and Liberty Counsel, defending freedom has entailed taking up the mantle of Scott Lively, the far-right pastor who collaborated closely with drafters of a 2009 Uganda bill that would have imposed the death penalty for homosexuality and who claims credit for Russia's draconian anti-gay “propaganda” law. Last August, Staver assailed a Ugandan LGBT group's human rights lawsuit against Lively, casting Lively as a "peaceful" man being victimized  by “a George Soros-backed organization.”

Back in the U.S., Staver has crusaded against LGBT education in decidedly hyperbolic terms. In October 2013, Staver issued a press release lambasting LGBT History Month for robbing “the innocence of our children” and promoting a “sexualized agenda.” Teaching students that LGBT people exist, Staver wrote, is nothing less than "sexual assault."

Liberty Counsel's latest hobbyhorse has been what it depicts as the increasingly hostile climate facing Christians in the U.S. armed forces. In November, the organization posted a video listing a litany of examples of alleged violations of religious liberty in the military; each example was easily debunked.

That kind of rabid rhetoric hasn't stopped Staver from enjoying a friendly relationship with Fox News, where he has
peddled anti-LGBT bigotry with impunity. 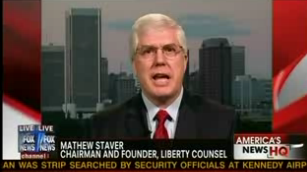 In a December 2011 appearance on Fox, Staver has mocked a transgender woman as “a man ... wearing lipstick” and egged on the fight for Texas textbook standards that touted “Judeo-Christian values” and curtailed referenced to minority faiths. Serial anti-LGBT misinformer and Fox commentator Todd Starnes has also relied on Staver to push groundless, conspiracy-minded attacks on LGBT non-discrimination protections.

Staver has a particularly cozy relationship with Fox host Mike Huckabee. During Huckabee's unsuccessful bid for the Republican presidential nomination in 2008, Staver served on the former Arkansas governor's Faith and Family Values Coalition. Their ties didn't cease with Huckabee's campaign; the pair traveled to Israel together in 2009, and Staver has appeared on Huckabee's Fox program and radio show. During an April 2013 appearance on Huckabee's radio program, Staver attacked California's “ex-gay” therapy ban as “dangerous”; Huckabee parroted Staver's talking points and suggested that the ban put youth “at risk” of falling under the sway of “a pro-homosexual counselor.”

While Liberty Counsel and its partner university enjoy considerable stature on the Religious Right, there's little doubt that Staver's public profile has been boosted considerably by the reliably friendly treatment he receives from conservative outlets like Fox. That platform has helped Staver to advocate demeaning, damaging anti-LGBT bigotry and pseudoscience - first on the airwaves, and now in the halls of Congress.