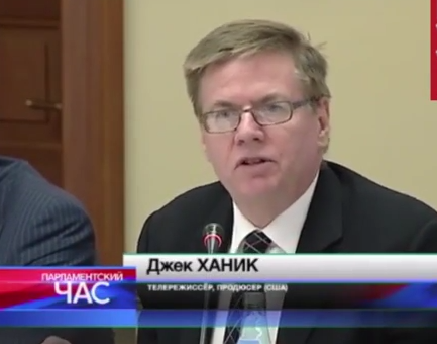 A former senior Fox News producer spoke out in support of Russia's anti-gay crackdown at a forum sponsored by the Duma's family committee and conservative religious groups.

Right Wing Watch reported on October 3 that an assemblage of international right-wing activists traveled to Moscow in June to support the Russian government's campaign to restore “traditional values,” an effort that gained international visibility after the passage of laws banning the dissemination of “gay propaganda” and the adoption of children by same-sex couples and families from LGBT-friendly countries. Among the participants in a roundtable discussion titled “Traditional Values: The Future of the European Peoples” was longtime Fox News employee Jack Hanick:

Russian news reports mention that also present to give the American perspective was a man named Jack Hanick. On his LinkedIn page and in interviews, Hanick describes himself as a founding employee of Fox News, who worked there for 15 years as a news director. Fox News confirmed that Hanick was an employee from 1996 through 2011 where he worked in “a production role dealing with the visual aspects of the show” rather than in any “editorial capacity.”

Hanick told the roundtable that God had called on Russia to “stand up for traditional values.”

Right Wing Watch further noted that Hanick told a Russian magazine in August that he admired Russia's increasingly theocratic state. The Russian Orthodox Church has often colluded with President Vladimir Putin - and lent crucial support to the country's anti-gay laws - and Hanick thinks the U.S. has a lot to learn from this model.

“In Russia the issue of separation of church and state, obviously, is much less of an issue,” Hanick reportedly told the magazine, “and I see this as a positive thing.”

Hanick's LinkedIn profile states that as a member of the “start-up Team for the Fox News channel,” he took a leading role in developing “the original look and feel of Fox News Channel.” While he left the network two years ago, he'd likely be pleased that his erstwhile employer hasn't joined the international outcry against Russia's assault on LGBT people. Even as Russia flagrantly violates essential norms of international human rights law, Fox News has ignored the country's anti-gay crackdown.