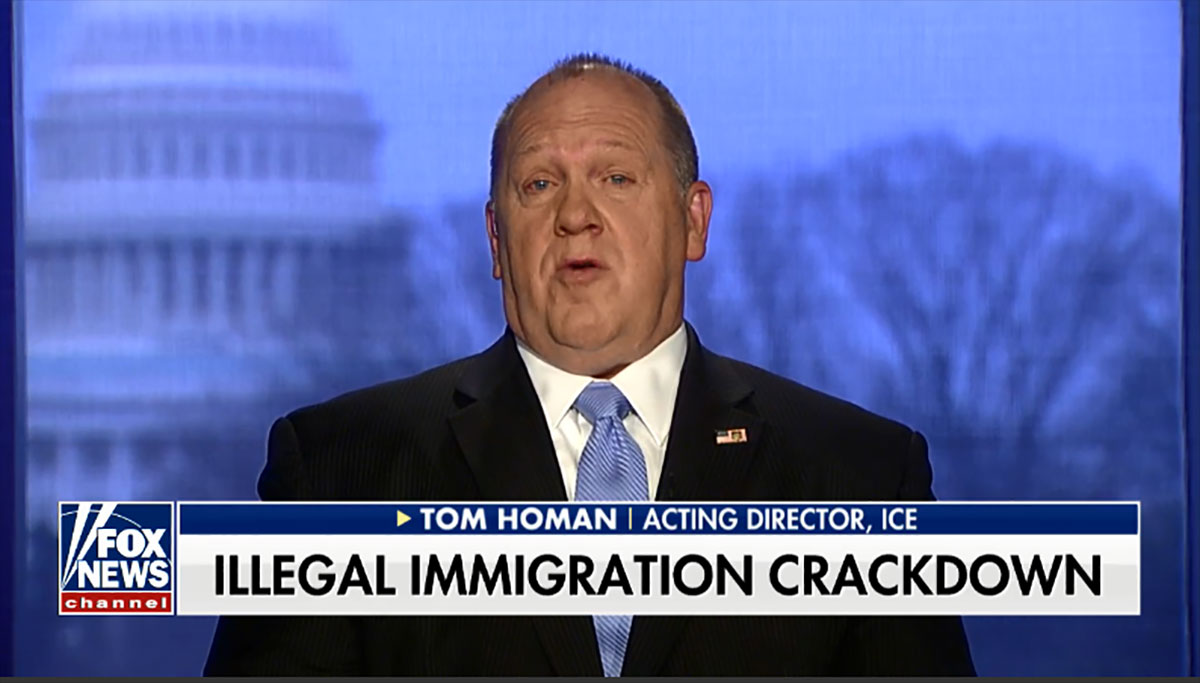 It’s not every day that Fox & Friends, the Fox News morning show whose vicious attacks on progressives and knee-jerk loyalty to President Donald Trump has made it the president’s favorite program, addresses an article in the left-wing magazine The Nation. But Friday’s story “It’s time to abolish ICE,” by the researcher and writer Sean McElwee, apparently touched a nerve. In the piece, McElwee argues for eliminating the Immigration and Customs Enforcement, established in 2003, writing that because of the agency’s increasingly brutal deportation raids, “ICE has become a genuine threat to democracy, and it is destroying thousands of lives.”

It should be no surprise that the program never bothered to explain McElwee’s thesis, or the myriad abuses of power at Immigration and Customs Enforcement that led him and a growing number of immigration activists and Democratic politicians to this conclusion. Fox’s coverage is virulently anti-immigrant and anti-immigration, and its conservative commentators’ typical criticism of government overreach vanishes when the action involves law enforcement assaults on people of color.

Instead, after reading the story’s headline and noting that liberal MSNBC host Chris Hayes had suggested that Democratic presidential candidates would have to reckon with its thesis, host Steve Doocy simply sneered, “So is this really what Democrats should run on in 2020?” The subsequent discussion between Democratic and Republican strategists largely focused on the politics of the issue, kicking off with Doocy asking the Democrat, “You don't think it's a good idea to get rid of ICE, do you?”

That sort of instinctive support for law enforcement officials who support harsh anti-immigrant measures has made Fox a cozy home for ICE acting director Tom Homan at a time when he has avoided other networks.

From December 1 through March 11, during a period in which ICE’s inhumane tactics and clashes with state and local officials have led to increasing calls for accountability, Homan has made 10 appearances on Fox (he “has been on Fox a lot,” Fox & Friends host Ainsley Earhardt acknowledged last month). Over the same period, Homan has not appeared on CNN, MSNBC, ABC, CBS, or NBC, according to a Media Matters review.

Interviews with legitimate journalists over that period could have led to tough questioning on, for example, ICE’s shockingly heartless practices, which have included separating a mother from her 7-year-old daughter for months and arresting fathers in the act of leaving their children at school. Real reporters might have asked about the agency’s targeting of immigrant rights activists and agency critics or challenged Homan’s own threat that politicians in so-called “sanctuary cities” should be charged with crimes.

Homan joins other high-ranking Trump administration officials and the president himself in retreating to the safe confines of Fox. There he has been able to use soft interviews from the network’s openly right-wing hosts -- his appearances include four on Fox & Friends, two with Neil Cavuto, and one each with Tucker Carlson and Laura Ingraham -- to defend and promote his agency.

Last week, for example, the Justice Department sued California and its leaders after the state passed three laws that tried to make it more difficult for ICE to round up immigrants. The state’s Gov. Jerry Brown termed the lawsuit an “act of war” and part of a larger “reign of terror” against the state. Sen. Kamala Harris (D-CA) harshly criticized both the Department of Justice’s action and ICE (which she nonetheless said “should exist”). With his agency under fire, on Friday, Homan started the day on Fox & Friends and ended it on Tucker Carlson Tonight.

On Fox & Friends, Homan faced questions like, “What do you make of the governor of the great state of California and their freshman senator?” (he’s not a fan), “Are you abusing your authority?” (he said he is not), and “Is the federal government, Tom, going to war with California?” (he said it is not). Later in the interview, Kilmeade suggested that Homan not worry so much about the state’s leaders because its people are probably behind him, to which Homan replied, “I agree with you 100 percent.” Doocy concluded the interview by telling Homan, “You’ve got a tough job, just saying. California is not making it easier.”

Carlson was even more eager to support Homan, at one point asking him, “How does it make you feel to hear your agents described in effect as bigots, as a domestic Gestapo by Democrats in California?” Homan replied that it was “an insult to the 20,000 American patriots that work for ICE” who “get up every day and strap a gun to their hip to defend this nation.”

That’s a theme Homan returns to time and again in his Fox interviews, praising his agency’s staff, saying that they are on the front lines fighting to keep the nation safe, and so suggesting that anyone who dares to criticize ICE is helping criminals and endangering the safety of the public. He is also quick to lash out at the state and local politicians he sees as standing in the way of his efforts by standing up for immigrant communities. That’s a very safe maneuver on the network that helped turn the term “sanctuary city” into a right-wing boogeyman,

And of course, Hogan uses the Fox platform to praise Trump for removing the Obama-era constraints on ICE and unleashing the agency. “Under this president, this president has done more for border security and public safety than any of the six presidents I've worked for,” he said on Fox & Friends in December. “Just since his leadership in January, border crossings at a 45-year low. Now, that's not a coincidence. That's because this president is letting the men and women of border patrol and ICE do their job and he’s sending a strong message.”

Homan made nearly identical comments, citing the same “45-year low” statistic which he attributes to the president’s actions, during at least three other Fox interviews since December 1.

Surely part of the reason Hogan is going on Fox to laud the president’s efforts on immigration is that he knows the president is watching. Trump regularly consumes hours of Fox News, and at least twice he has tweeted about Hogan’s appearances soon after he went on the network, in both cases highlighting the “45-year low” figure.

Acting ICE director Homan: “We made huge impact this year, A 45-year low at one point last year IN illegal border crossings.”

ICE acting director: “Under this president, we had a 45-year low in illegal immigration on the border this year.”

As activists increasingly call for the dissolution of his agency in light of the catastrophic moral toll it is taking on the country, for Homan the only audience that really matters is the president.