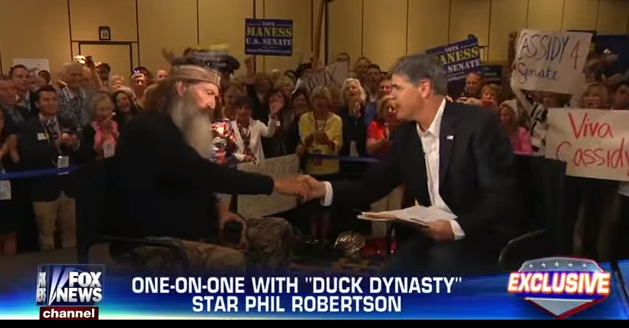 On May 29, Duck Dynasty star turned GOP darling Phil Robertson gave a keynote speech at the Republican Leadership Conference (RLC). His speech, which focused on religion and encouraged Republicans to “get godly,” is the latest milestone in the controversial reality TV star's meteoric and unexpected rise in national conservative politics.

Robertson's presence at the RLC perplexed Fox News' Juan Williams, who questioned why the GOP had embraced a figure who gained national notoriety after making a number of homophobic and racist statements in an interview with GQ. During a May 31 appearance on Fox's Cashin' In, Williams asked what Robertson's rise in conservative politics said about the GOP:

BOLLING: I don't know, I don't know Juan, what about it? I think he's big business, and I think it's probably good for the GOP. No?

WILLIAMS: No, are you kidding me? What does it say, Eric, that GOP makes a hero out of a guy that says black were happy with slavery and segregation, and gays are to be damned. Is he the chief of outreach for the GOP, or is he the chief of internal self-satisfaction?

But Williams' own network is at least partly responsible for the GOP's fawning relationship with Robertson, having worked for months to whitewash his offensive comments and prop up the reality star as a beacon of American Christianity.

Fox's fascination with the Duck Dynasty family predates Robertson's GQ interview. But when A&E announced in Decemberthat they had placed Robertson on a hiatus over his comments, the network went into damage control mode; Fox's Sean Hannity described the comments as "old fashioned traditional Christian sentiment and values," while Fox reported Todd Starnes claimed Robertson was just reflecting "the teachings of the Bible." Even Megyn Kelly came to Robertson's defense, calling him a “Christian guy” and criticizing LGBT activists for trying to "shut down the debate."

Fox's attempt to turn Robertson into a kind of religious martyr is part of the network's broader effort to depict blatant homophobia as a part of mainstream Christianity. From Robertson to Brendan Eich to the Benham brothers, Fox News has seized on opportunities to depict opponents of LGBT equality as victims of a culture war in which Christians are persecuted because of their views on homosexuality. By whitewashing Robertson's comments, Fox News has been able to depict his critics as “anti-straight,” anti-Christian bigots, paving the way for his faux-victimization story to evolve into a full on conservative rallying cry.

Following his speech at the RLC, Robertson appeared on Hannity where he admitted he was “surprised to be chosen to speak at the event. 'I'm not a political person,' he said. 'I guess the GOP may be more desperate than I thought to call somebody like me.'” It was an uncomfortable message on a network that can't seem to find an anti-gay figure too extreme to champion.