Social conservatives will descend on Washington, D.C., next month for the Values Voters Summit (VVS), an annual convocation put on by an assemblage of anti-LGBT groups that will prominently feature high-profile right-wing media figures.

Sponsored by organizations like the Family Research Council (FRC) and the American Family Association (AFA) - both Southern Poverty Law Center (SPLC)-designated hate groups - VVS got its start in 2006. As in the past, this year's gathering promises to feature leading opponents of equality for women and LGBT people. Several confirmed speakers will be familiar faces to consumers of right-wing media: 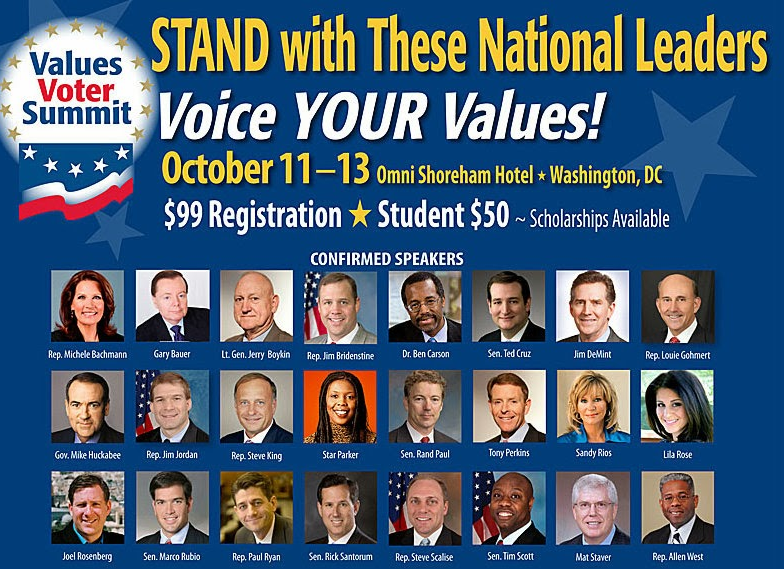 Among the right-wing media personalities slated to speak at the conference:

A Johns Hopkins neurosurgeon who rose to right-wing stardom after berating President Barack Obama's policies during a speech at the National Prayer Breakfast in February, Carson is a Washington Times columnist and Fox News regular.

In March, Carson came under fire for a Fox appearance in which he compared marriage equality to pedophilia and bestiality, resulting in strong condemnation from his Johns Hopkins colleagues. Carson's remarks came as no surprise to readers of his 2012 book America the Beautiful, in which he wrote that marriage equality “is a slippery slope with a disastrous ending, as witnessed in the dramatic fall of the Roman Empire.”

WND columnist and professional conspiracy theorist Corsi came to public notoriety with his 2004 Swift Boat smears against Democratic presidential nominee John Kerry's war record. An unrepentant birther who has appeared on Fox to air his baseless theories about President Obama's birthplace, Corsi predicted in May 2012 that if Obama were re-elected, conservatives would be placed in “education camps.”

Corsi is also a proud homophobe, having spoken out in 2011 against the presence of gay conservative group GOProud at the Conservative Political Action Conference (CPAC).

The host of Fox News' Huckabee is among the network's most reliable purveyors of anti-LGBT smears. As a presidential candidate in 2007, the onetime Arkansas governor refused to back down from his 1992 call for AIDS patients to be quarantined, a position he took as an unsuccessful U.S. Senate candidate. As the disease ravaged the nation's gay population, Huckabee also opposed further federal funding for AIDS research.

Huckabee makes no effort to conceal the fact that his opposition to LGBT rights is motivated in large part by disgust. In a 2010 New Yorker interview, he cited “the ick factor” as one of his chief reasons for opposing marriage equality. He was also largely responsible for organizing "Chick-fil-A Appreciation Day" in August 2012, encouraging people to support the fast food chain and its anti-gay political donations.

The hate groups sponsoring the VVS have no stronger ally than Starnes, a dutiful Fox News mouthpiece for their anti-LGBT stances. Starnes has compared marriage equality to bestiality, launched ugly attacks on transgender individuals, and championed anti-LGBT discrimination by businesses.

After the Supreme Court struck down Section 3 of the Defense of Marriage Act (DOMA) in June, Starnes tweeted, “Supreme Court overrules God,” before predicting that the Bible would soon be banned “as hate speech.”

A syndicated columnist and Fox News contributor, Thomas is no fan of marriage equality. After the Supreme Court handed down its DOMA decision, he penned a column predicting civilizational ruin and the inevitable acceptance of polygamy and pedophilia.

Thomas has a long-standing history of crusading against LGBT rights. In a 1997 column denouncing “the homosexual lifestyle,” he wrote that accepting homosexuality would “cause physical, emotional, and spiritual damage to ourselves and to our wider culture.”

West, a former Republican congressman from Florida, lost his re-election bid in 2012 and promptly became a Fox News contributor. While in office, West claimed that anti-LGBT employment discrimination isn't real, and fired an intern who had retweeted a pro-gay tweet.

In July, after Lady Gaga changed the last verse of the National Anthem to “home of the gay,” West blasted the singer for “defiling” the song.

As a member of the House, West earned a Human Rights Campaign (HRC) score, which measures support for equality, of zero.