While guest hosting Fox's “straight news” program, Special Report, Shannon Bream did a report suggesting that the estate tax hurts small businesses and therefore causes the economy to hemorrhage jobs. But the report failed to mention that a vanishingly small number of businesses and individuals are subject to the estate tax.

Bream: “Heirs Are Often Forced To Sell The Business.” From the June 29 edition of Fox News' Special Report:

BREAM: We continue our look at the ways to save the economy by focusing tonight on the estate tax, how it affects small businesses and the people whose livelihoods depend on them.

The federal estate tax can be especially tricky for many small, family-held businesses. That's because, when an individual dies, what he or she leaves behind can be subject to significant taxation, even if it's primarily invested in a family business. If the entity doesn't have enough cash on hand to meet the obligation, heirs are often forced to sell the business in order to raise enough money to satisfy the tax bill. [Fox News, Special Report, 6/29/11]

BREAM: Small business owners have no idea what may happen when the current rates expire at the end of 2012.

BREAM: For now, family-held small businesses say they're left to wonder whether law makers will once again reach an 11th-hour deal on estate taxes, leaving them hesitant to expand or invest until they get that guidance, meaning it's up to Washington to convince them to get off the sidelines.

LOGAN: It's part of a comprehensive tax reform. And that's what we're hoping for. That's what will alleviate that uncertainty that goes to small businesses.

BREAM: Unless Congress intervenes, beginning in 2013, estates will be taxed starting at $1 million instead of 5 million, and the rate will jump from 35 percent to 55 percent. [Fox News, Special Report, 6/29/11]

Bream's Report Contained No Pushback To The Claim That Estate Taxes Severely Hurt Small Businesses. Despite the fact that Special Report is supposedly one of Fox's straight news programs, Bream did not present any argument in favor of not cutting estate taxes during the segment.

AP: “The [Estate] Tax Would Affect Just 0.14 Percent Of All Estate In 2011, Or About 3,500 Estates, Generating About $11.2 Billion In Revenue.” The Associated Press reported that the 2010 tax deal between Obama and Congressional Republicans exempts the first $5 million of an individual's estate, with a top rate of 35 percent. AP reported that the tax would hit 3,500 estates in 2011 and generate roughly $11.2 billion in revenue. From the AP article:

More than 40,000 estates worth $1 million to $10 million would be expected to escape inheritance taxes next year under the deal struck by Republicans and President Barack Obama.

The package would leave only about 3,500 of the largest estates subject to federal taxes next year, a boon for the wealthy that many House Democrats say they can't accept.

The federal estate tax reaches fewer than 1 percent of inheritances, but it has long been a political lightening rod among lawmakers from both parties. Many Republicans want to eliminate the estate tax altogether, derisively calling it a “death tax” that makes it hard for parents to transfer small businesses to their children.

Estate tax opponents got their wish this year, when the tax was temporarily repealed. But the tax holiday will be short-lived because, under current law, the estate tax is scheduled to return next year with a top rate of 55 percent for estates larger than $1 million for individuals and $2 million for married couples.

The package Obama negotiated would set the top rate at 35 percent and exempt the first $5 million of an individual's estate. Couples could exempt $10 million.

At those levels, the tax would affect just 0.14 percent of all estates in 2011, or about 3,500 estates, generating about $11.2 billion in revenue, according to an analysis by the Tax Policy Center, a Washington research group.

Under the current law, more than 44,000 estates are projected to be taxed next year based on the number of estate-holders in that value bracket who are likely to die. That would generate $34.4 billion in taxes. [Associated Press, 12/8/10, via Huffington Post]

CBO: “Most Owners Of Family Farms And Small Businesses Are Unlikely To Owe Estate Tax.” From a 2009 Congressional Budget Office (CBO) report that looked at the effect of the estate tax on small businesses and farms in 2000 and 2005, when the estate tax affected more taxpayers than it does now:

The vast majority of estates, including those of farmers and small-business owners, had enough liquid assets to pay the estate taxes they owed in 2005. However, estates involving farms or small businesses are slightly less likely than other estates to have sufficient liquid assets to cover their estate taxes. In 2000, when the effective estate tax exemption amount was $675,000, 138 (or about 8 percent) of the estates of farmers who left enough assets to owe estate taxes faced a tax payment that exceeded their liquid assets, compared with about 5 percent of all estates that owed taxes. Those numbers are upper bounds, however, because the definition of liquid assets used on estate tax returns excludes some money held in trusts, which could also be used to pay estate taxes. The increase in the exemption amount since 2000 probably further mitigated the impact on small businesses. Moreover, the estate tax currently includes several provisions that owners of family farms and small businesses can use to mitigate its effect. For example, heirs are allowed to pay the tax in installments over 15 years at low interest rates, and several special valuation provisions allow some assets to be assessed at less than their market value. [Congressional Budget Office report on Federal Estate and Gift Taxes, 12/18/09]

Special Report Airs Graphic Referring To The Estate Tax As The “Death Tax.” The following graphic aired during Bream's report: 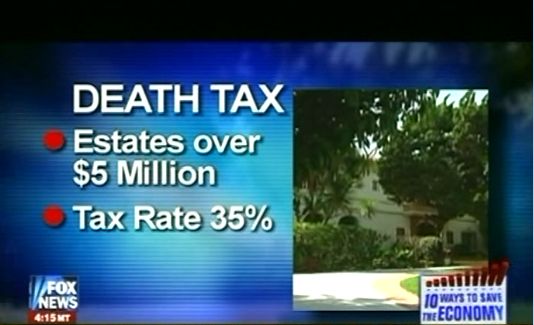 The Phrase “Death Tax” Is A Loaded Term Created By GOP Pollster Frank Luntz To Make The Estate Tax Unpopular. The Washington Post reported that GOP pollster Frank Luntz (now a Fox News contributor) “poll-tested the term 'death tax' and advised the new GOP majority to never use the terms 'inheritance' or 'estate tax' again.” From the Post:

By 1994, Newt Gingrich's Republican insurgents had latched onto the estate tax issue, but the Contract With America called for an estate tax reduction, not repeal. In 1995, Luntz poll-tested the term “death tax” and advised the new GOP majority to never use the terms “inheritance” or “estate tax” again.

But ultimately, whether people believe the estate tax will affect them has little bearing on support for repeal. Early this year, with [anti-estate tax activist Patricia] Soldano's money, Luntz again began polling, this time in the face of record budget deficits and lingering economic unease. More than 80 percent called the taxation of inheritances “extreme.” About 64 percent said they favored “death tax” repeal. Support fell to a still-strong 56 percent when asked whether they favored repeal, even if it temporarily boosted the budget deficit. [The Washington Post, 4/13/05]