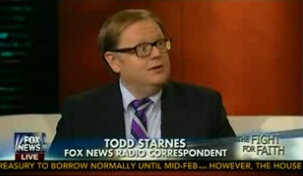 Fox News Radio reporter Todd Starnes continued to shill for the extremist American Family Association (AFA), allowing the anti-gay hate group to bill itself as “a mainstream, evangelical, pro-family group” and baselessly asserting that the military is waging a campaign of “retribution and reprisals” against conservative soldiers who support the AFA.

In an October 15 column for FoxNews.com, Starnes assailed the U.S. Army for including the AFA in a presentation on domestic hate groups. Much as he did in an appearance on Fox & Friends earlier on October 15, Starnes whitewashed the AFA's record of anti-gay hate, describing the organization as a “well-respected Christian ministry” that simply supports “traditional family values” (emphasis added):

The Pentagon has admitted that information used in an Army briefing that labeled the American Family Association (AFA) as a domestic hate group was not acquired from official sources and does not reflect Army doctrine.

Meanwhile, the president of the well-respected Christian ministry says his organization may file a defamation lawsuit against the military.

“We are probably going to be taking legal action,” said Tim Wildmon, president of one of the nation's most prominent Christian ministries. “The Army has smeared us. They've defamed the American Family Association.”

The AFA was listed alongside domestic hate groups like the Ku Klux Klan, Neo-Nazis, the Black Panthers and the Nation of Islam during a briefing last week at Camp Shelby in Mississippi.

A soldier who attended the briefing recently sent me a photograph of a slideshow presentation that listed AFA as a domestic hate group because of their support of traditional family values and their opposition to homosexuality.

“For a taxpayer-funded organization like the military to use a politically-motivated group's hate group list is problematic,” Wildmon said. “One way or another, we're going to get this changed.”
And he strongly rejects accusations that AFA is a hate group.

“We are a mainstream, evangelical, pro-family group,” he said. “We don't hate anybody. We have strong feelings on moral values. We oppose the gay and lesbian social and political agenda. We always have. We always will, but that doesn't mean we hate anyone.”

Starnes' service as a dutiful mouthpiece for anti-gay hate groups defines his journalistic career, so it's not surprising that he allowed Wildmon's sugarcoating of the AFA to go unchallenged. Had Starnes actually detailed the rhetoric and ideas conveyed by AFA leaders, his readers might have doubted Wildmon's claim that he and his “mainstream” AFA colleagues “don't hate anyone.”

The AFA's Bryan Fischer has called for an “Underground Railroad” to “deliver innocent children from same-sex parents, labeled gay sex as “a form of domestic terrorism,” and linked homosexuality to pedophilia. In designating the AFA as a hate group, the Southern Poverty Law Center (SPLC) noted, “The AFA has declared that'homosexuality gave us Adolph Hitler ... the Nazi war machine and six million dead Jews.' ” In his column, Starnes simply wrote off the SPLC as “an organization with a dubious past,” but his own news organization has cited the SPLC's work on domestic extremists as recently as August.

In addition to letting the AFA off the hook, Starnes delivered another whopper in his column when he claimed that the military is retaliating against conservative Christian soldiers who support groups like the AFA. Starnes is known for making wild-eyed assertions about anti-Christian persecution in the military - he declared in September that “Christians are trading places with homosexuals” there - and true to form, Starnes reported that the military is systematically purging conservatives:

[A] soldier who contacted me said he was “completely taken back by this blatant attack not only on the AFA but Christians and our beliefs.”

During the briefing soldiers were reportedly told that they could face punishment for participating in organizations that are considered hate groups.

The soldier said he became alarmed because he is a financial contributor to the AFA ministry.

“I donate to AFA as often as I can,” he said. “Am I going to be punished? I listen to American Family Radio all day. If they hear it on my radio, will I be faced with a Uniformed Code of Military Justice [UCMJ] charge?”

It turned out his fears of retribution and reprisals were not unfounded. I received word that the military launched an investigation after my column was published. Officers are in the process of trying to identify the soldier who spoke to me.

Starnes provided no evidence that the apparent investigation into the soldier's identity had anything to do with the soldier's conservative political and religious views. Given that Article 134 of the UCMJ prohibits soldiers from engaging in speech or actions that “bring discredit upon the armed forces,” it's far more likely that the investigation has to do with the soldier's speaking to a reporter who repeatedly condemns the military for being insufficiently anti-gay.

While Starnes' misleading reporting on the military and the AFA may be shoddy journalism and a disservice to readers, it's a reminder of why the AFA is lauding Fox News for its “very friendly” treatment of the organization.