Following the announcement that Pastor Louie Giglio would no longer be performing the benediction at President Obama's second inauguration, Fox News reporter Todd Starnes rushed to blame “heterophobic bigots” for allegedly forcing the pastor to withdraw from the event.

On January 10, Georgia Pastor Louie Giglio announced that he had decided to withdraw from performing the benediction at President Obama's second inauguration. His decision came in the wake of criticism over a January 9 Think Progress report detailing a "vehemently anti-gay" sermon Giglio gave in the mid-1990s, during which he railed against the “homosexual lifestyle” and claimed that gay people could become straight through the power of Christianity. 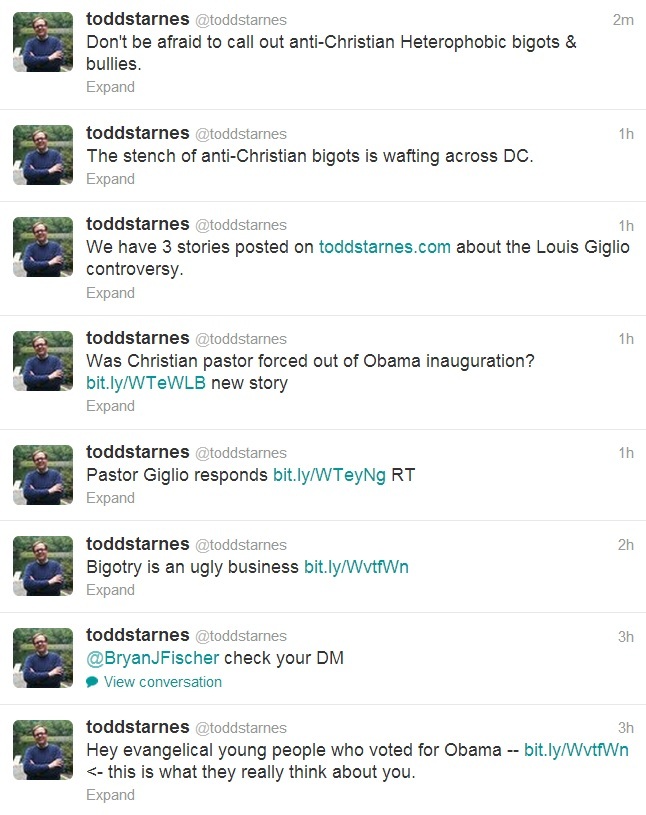 Starnes then published a Fox News Radio article suggesting that Giglio had been "forced out" of the inauguration by the Obama administration:

Tony Perkins, president of the Family Research Council, told Fox News that he was shocked at the attacks from homosexual activists.

“What's becoming ever so clear to those who thought homosexual activists could be appeased is that their ultimate goal is to sanitize the public space of anyone who holds to a biblical view of morality,” Perkins said. “It pulls back the curtain and shows us the true agenda here. It's not about tolerance. It's about forced acceptance.”

Bryan Fischer, who hosts a popular national show on American Family Radio, said Giglio was banished in a “naked display of bigotry.”

“It's clear from the statement from the inaugural committee that Giglio was bounced from the program. It clearly wasn't his idea,” Fischer told Fox News. “The banishment of Giglio is a naked display of bigotry and hatred directed at the last safe target in America for angry intolerance: Americans who believe what the Scriptures teach about human sexuality. Truth about homosexuality has now become hate speech, and speaking the truth about homosexuality has now become a hate crime.”

Fischer said the bottom line is that “bullies and bigots have won a major victory.”

Neither Perkins - who has made a career of trying to link homosexuality to pedophilia - or Fischer - who has repeatedly blamed gays for the Holocaust - is a credible source when it comes to lecturing the administration about “bigotry.”

But this is apparently what qualifies as journalism at Fox News: float a baseless accusation of anti-Christian bigotry, quote a few anti-gay hate group leaders who agree with your theory, and hit “publish.”