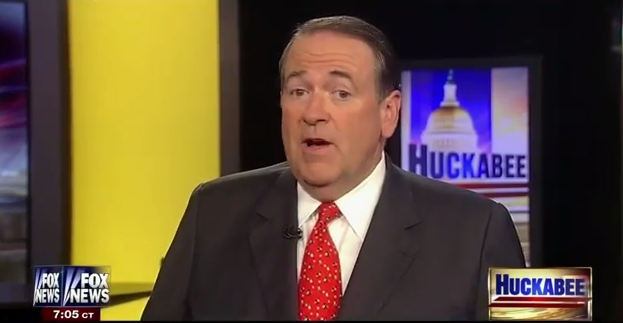 Fox News host Mike Huckabee joined 79 other conservatives in signing a letter blasting “sexual radicals” for their efforts to scuttle a planned conference of the World Congress of Families (WCF), a group notorious for stoking homophobia and promoting harsh anti-gay laws internationally.

On August 30, the Rockford, IL-based WCF plans to hold a “Life, Family, and Freedom Conference” in Melbourne, Australia. Protests have led to three changes of venue for the conference, which prominent members of Australia's governing party are slated to attend. The WCF has responded to those protests with a letter signed by 80 social conservatives, including Huckabee. Accusing “sexual radicals” of waging a “smear campaign,” the letter charges that opponents of the conference aim to “transform society into something unrecognizable to generations past”:

Sexual radicals have launched a smear campaign to discredit the Melbourne conference, which misrepresents the international pro-family movement and the positions of the World Congress of Families.

Attacks on the Melbourne conference and the international pro-family movement generally are an attempt at intimidation - a weapon used to stigmatize family advocates, stifle dissent and foreclose a debate.

The goal of sexual radicals is to deconstruct marriage and marginalize the family, and thus to transform society into something unrecognizable to generations past. Like all social experiments that attempt to create a “new man,” these are doomed to failure.

But a new Human Rights Campaign (HRC) report documents how the WCF has been involved in helping promote the enactment of harsh anti-gay laws internationally.

Founded after a 1995 meeting between Illinois anti-gay activist Allan Carlson and two Russian sociologists, the WCF is a self-proclaimed “alliance of orthodox believers, based on their commitment to Judeo-Christian values and the natural family.” Partnering with 29 social conservative organizations - with a combined annual budget estimated at $216 million - the WCF convenes “pro-family” activists for regional and international conferences aimed at combatting reproductive freedom and LGBT equality. WCF partner organizations include a number of groups that have been labeled anti-gay “hate groups” by the Southern Poverty Law Center, including the American Family Association, the Family Research Council, and the Catholic Family and Human Rights Institute.

While the WCF's ties to conservative groups have helped make it influential on the American right - the George W. Bush administration even sent delegates to WCF conferences in 2004 and 2007 - HRC's report notes that much of the WCF's work has concentrated on Russia, which WCF managing director Larry Jacobs has touted as a “great ally for conservatives”. The organization has forged close ties with key Russian lawmakers and church officials in support of the country's law banning gay “propaganda,” and planned to hold its 2014 conference in Moscow until that event was cancelled due to international tensions over Ukraine.

Moreover, the WCF has convened “pro-family” conferences in Africa, where attendees learn of the alleged dangers of contraception and homosexuality. Attendees at WCF meetings have included the first ladies of Nigeria and Uganda. Both countries have since passed harsh laws imposing 14-year prison sentences for gay sex.

Huckabee's support for the WCF isn't a recent development. He also signed a WCF letter in 2012 protesting the U.S. embassy's participation in the Prague gay pride parade. That letter accused the American government of “aggressively promoting the 'gay' agenda internationally,” stating that the signers couldn't “imagine a worse form of cultural imperialism.”

The WCF's apoplectic rhetoric echoes Huckabee's own. Speaking at a recent conference sponsored by anti-gay activists, Huckabee asserted that the U.S. was “becoming a whole lot more like” Communist China.

During his unsuccessful 1992 U.S. Senate bid, Huckabee called for AIDS patients to be quarantined, and he has cited "the ick factor" as one of the reasons he opposes same-sex marriage. However, Huckabee steadfastly contends that he is "not homophobic."