Earlier this month, Fox News political analyst Dick Morris announced the creation of Super PAC for America, whose goal is to raise $20 million to help Republicans win 100 House seats in this year's election. As he has numerous times before, Dick Morris is using his Fox News platform to promote and raise money for the group.

Morris: “There is no limit to how much you can donate” to help GOP “win 100 new seats”

Goal of PAC is Republican majority that will “repeal Obamacare.” In a letter posted on the Super PAC website (a version of which was also posted to Morris' personal website on October 5), Morris states that his goal for the PAC is to raise $20 million in order to target and win 100 House seats. According to Morris, the resulting “very large” Republican majority will be able to “repeal Obamacare” and “put in the reforms that will put our country back on a proper financial footing and deal with the staggering debt our nation faces.” Morris also touts how a recent Supreme Court decision “took the cap off of the $5,000 limit that individuals can give to such political action committees”:

As long as our Super PAC never donates to an individual campaign and solely engages in independent expenditures on behalf of candidates, we have no limit on the amount individuals or corporations can donate.

The Super PAC of America is in a unique position. With your help we can act as the guardian angel for this second-tier of 50 congressional seats that are up for grabs and give support to these candidates by taking commercials across television, engaging in direct-mail and online efforts, and setting up phone call banks across America.

Our goal is very simple. In the next four weeks we are seeking to raise $20 million for Project 100.

Most Americans can't afford such large donations. Even $1,000 or $500 will help. A donation of $250 can buy a TV ad in many districts reaching hundreds of thousands. Anything you can give will help.

Morris' pitch for PAC called “iffy at best, if not exploitative.” Mother Jones' David Corn reported that “none of the established House-watchers are predicting a 100-seat gain for the GOP” and questioned whether Morris is “taking conservative contributors for a ride.” Corn added that Morris is “using a sales pitch -- 100 GOP House pick-ups -- that appears to be iffy at best, if not exploitative.”

Morris regularly promotes his projects on Fox. Morris regularly uses his Fox News appearances to promote his numerous projects, whether they be candidates, political groups, his own website, or some combination of the above, though he has a record of failing to disclose his associations with the campaigns and groups he promotes. Morris has claimed that he campaigns for Republicans and then brings “these opinions back through Fox.”

PAC has links to Newsmax

Newsmax apparently hosts PAC's website. The WHOIS file (screenshot) for the superpacforamerica.com domain posted at the domain registrar, GoDaddy.com, shows an email address for administrative and technical purposes that goes to the right-wing website Newsmax, and the phone number listed as a contact is registered to Newsmax. The person listed as the administrative and technical contact, Cleta Mitchell, is an attorney representing numerous conservative groups and candidates, including Christine O'Donnell and Sharron Angle. Further, the PAC's website displays the same blue “N” favicon (icon that appears in the browser's URL line) that Newsmax's main website also displays. 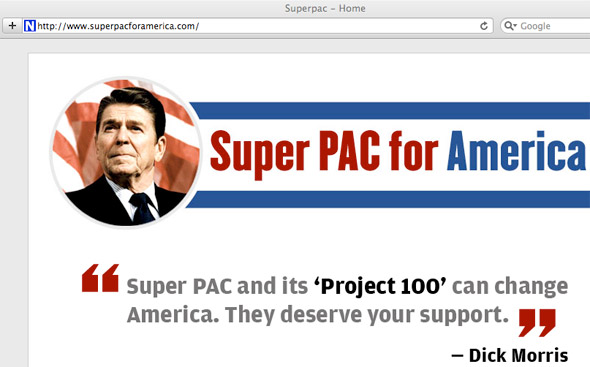