Earlier this year, Fox News hyped the rise in gasoline prices, blaming President Obama even though experts agree that worldwide market factors, not U.S. policies, set gas prices. So what is Fox saying now that gas prices are falling? 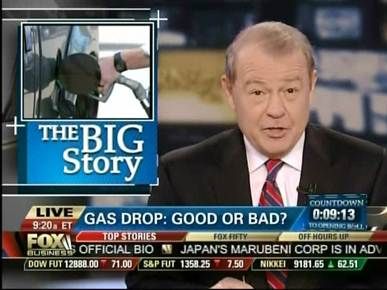 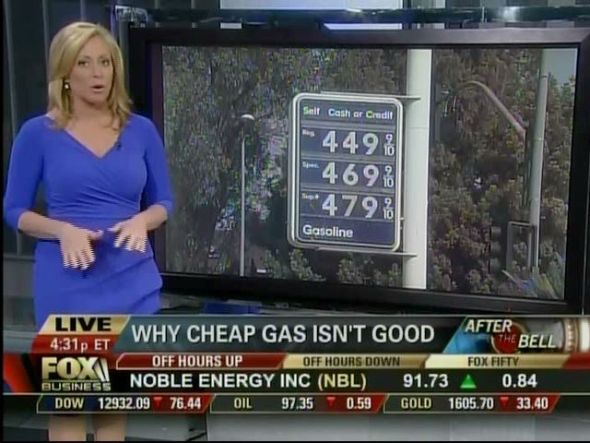 You know who else sees the drop in gas prices as a bad thing? Republican strategists who were hoping to reap the political benefits of high gas prices at the polls this year.

Stuart Varney, the Fox Business host pictured at the top, tried to explain the claim that the recent gas price drop might be “BAD,” saying it may be “just a sign of a weakening economy.” The Wall Street Journal reported that one of the reasons for the drop in gas prices was the “softening economies in the U.S. and Europe,” along with easing tensions in Iran and changes in the oil market.

Note that Fox is now raising how worldwide economic factors are affecting gas prices, after spending weeks blaming Obama for the price increase since the president's inauguration. Fox won't explain that the extremely low price in January 2009 was a short-lived drop caused by the massive economic recession. In fact, last week on Fox News, Varney explicitly said with a straight face that the price increase since the bottom of the recession had “everything to do with” Obama, but the recent drop in gas prices “has nothing to do with” him:

SEAN HANNITY: Let's look at gas price when he took office. I mean, let's go down the list here. Gas prices, average nationally, 1.84 a gallon. Well, now, the average price is $3.80 a gallon. Is that something to tout as success?

Curiously, Varney said the opposite during the 2011 price spike, acknowledging that “higher gas prices are the result of the expanding global economy and turmoil in the Middle East,” not Obama's drilling policies. This isn't the only issue on which Varney -- who has admitted that he is “very partisan” -- reversed himself recently. It's almost as if there's something different about 2012 that would make Fox's purported economic analyst revise his commentary...