Fox News seems to have largely given up in its losing battle against marriage equality for gays and lesbians, but there's still one segment of the LGBT community that it feels comfortable openly mocking and demonizing on air: transgender people.

In late 2011, during the controversy surrounding Chaz Bono's participation on Dancing with the Stars, Fox News host Megyn Kelly made the surprising move of expressing her support for transgender people. During the September 1, 2011 edition of America Live, Kelly stated:

The transgendered, they go through so much pain and emotional turmoil in dealing with the effects of that disorder or whatever you want to call it and I don't think they need people piling on and mocking them once they do something that many people consider very brave. But that's me, that's my two cents. [emphasis added]

In fact, it appears that most of Fox News' employees have ignored Kelly's suggestion. Over the past several years, the network has routinely made the transgender community a target of its mockery, misinformation, and general anti-LGBT fear mongering:

Fox's reliably defamatory coverage has prompted criticism from groups like the Gay & Lesbian Alliance Against Defamation (GLAAD), which recently asked of Fox's transphobic coverage "when will it change?"

Another group, Basic Rights Oregon, launched a petition against Fox's transphobia earlier this year in response to a Fox Nation article which used an image from the film Mrs. Doubtfire to trivialize a story about transgender healthcare.

But Fox's depictions of the transgender community haven't improved changed. In January, Fox News host Bill O'Reilly and Megyn Kelly joked that a transgender inmate was too unattractive to be sexually assaulted in prison. In May, Fox News contributor Laura Ingraham suggested that supportive parents of transgender youth were "pushing kids" into being sexualized at a young age. And in early June, Fox News Radio reporter Todd Starnes referred to a transgender woman as a "burly man wearing a dress."

On June 18, a number of experts working toward transgender equality condemned Fox's ongoing transphobia, warning that Fox's "vitriolic hate speech" was contributing to the high rates of violence and discrimination faced by the transgender community: 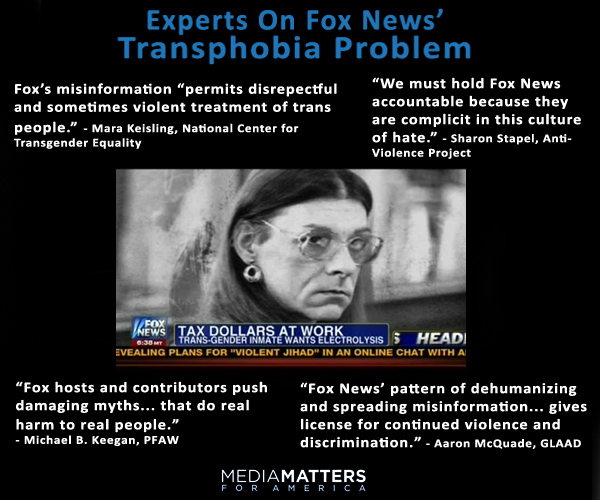 Unfortunately, this kind of coverage is likely to get worse over the next few months as Congress considers the Employment Non-Discrimination Act (ENDA), which would prohibit workplace discrimination on the basis of sexual orientation and gender identity.

In most cases, the damage done by Fox News' slanted news coverage is limited to simply misinforming viewers about current events.

But Fox's transphobia is different. When Fox employees use their national platform to mock and smear transgender people, they do real harm to millions of transgender Americans. As GLAAD's Aaron McQuade stated to Equality Matters:

Fox News' pattern of dehumanizing and spreading misinformation about trans people goes against the standards of good journalism and instead gives license for continued violence and discrimination against a community that instead deserves support and respect. [emphasis added]

Even Fox News has recognized that it can no longer get away with peddling anti-gay bigotry when discussing marriage equality. It's well past time for the network to give up its war on transgender people, too.