On Fox News, Liz Cheney Reiterated Her Opposition To Marriage Equality. During the November 17 edition of Fox News Sunday, Liz Cheney was asked about her opposition to marriage equality given her sister Mary's same-sex marriage to her wife, Heather Poe. Liz reiterated her opposition to same-sex marriage, saying “Listen, I love Mary very much. I love her family very much. This is just an issue in which we disagree.” [Fox News Sunday, via FoxNews.com, 11/17/13]

Cheney's Comments Were Publicly Criticized By Mary And Her Wife. According to The New York Times' The Caucus blog:

Things erupted on Sunday when Mary Cheney, a lesbian, and her wife were at home watching “Fox News Sunday” -- their usual weekend ritual. Liz Cheney appeared on the show and said that she opposed same-sex marriage, describing it as “just an area where we disagree,” referring to her sister. Taken aback and hurt, Mary Cheney took to her Facebook page to blast back: “Liz -- this isn't just an issue on which we disagree you're just wrong -- and on the wrong side of history.”

But then Mary Cheney's wife, Heather Poe, went further, touching on Liz Cheney's relocation from Northern Virginia to Wyoming to seek office. (Liz Cheney is already battling accusations of carpetbagging in the race.)

“I can't help but wonder how Liz would feel if as she moved from state to state, she discovered that her family was protected in one but not the other,” Ms. Poe wrote on her Facebook page. “Yes, Liz,” she added, “in fifteen states and the District of Columbia you are my sister-in-law.”

The feud reveals tensions not just within the family but in the Republican Party more broadly as it seeks to respond to both a changing America and an energized, fervently conservative base. [The New York Times, 11/17/13, emphasis added]

Former Vice President Dick Cheney waded into a spat between his daughters, Liz Cheney and Mary Cheney, who is openly gay, saying that Liz's kindness to her sister shouldn't be used to “distort” her position supporting “traditional marriage.”

One day after the two sisters appeared to take their disagreement public, Cheney and his wife, Lynne, issued a statement defending their daughter Liz, who is running for Senate in Wyoming.

“Liz has always believed in the traditional definition of marriage,” the Cheneys said in a statement today. "She has also always treated her sister and her sister's family with love and respect, exactly as she should have done.

“Compassion is called for, even when there is disagreement about such a fundamental matter and Liz's many kindnesses shouldn't be used to distort her position,” they added.

Fox News Spent Under 5 Minutes Reporting On The Controversy Following Cheney's Interview. According to an Equality Matters analysis, Fox News mentioned the Cheney marriage disagreement just once, for less than five minutes, compared to CNN and MSNBC, which both devoted more than an hour of coverage to the story: 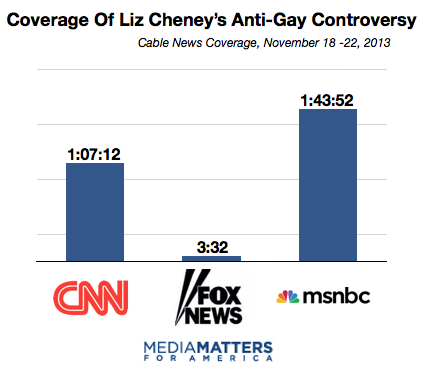 Fox News' Howard Kurtz: “Is All This Media Attention Warranted?” During the November 24 edition of Fox News' Media Buzz, Howard Kurtz asked whether the media's attention to the Cheney controversy was justified:

Liz Cheney Is A Former Fox News Employee. Cheney was hired at Fox News in January of 2012 and worked as a network political analyst until announcing her Senate campaign in July. [Huffington Post, 7/16/13]

Equality Matters searched news transcripts provided by TV Eyes for the word “Cheney” between November 18 and November 22 between the hours of 5 am and 12 am. Reruns and teases for upcoming segments were excluded.