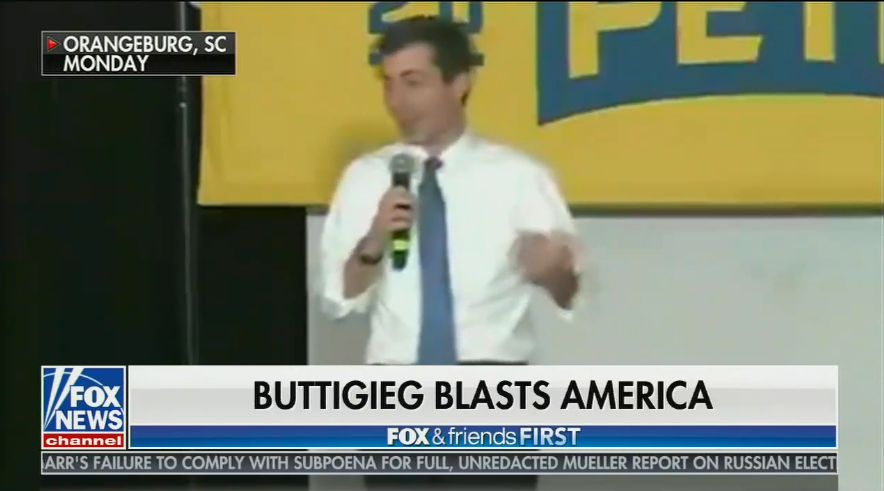 On the afternoon of May 6, Daily Wire personality (and purveyor of wildly misleading clips on Twitter) Ryan Saavedra tweeted a video of presidential hopeful and South Bend, IN, Mayor Pete Buttigieg. Saavedra wrote, “Democrat presidential candidate Pete Buttigieg today in South Carolina: America ‘was never as great as advertised.’” Washington Post political reporter Dave Weigel quickly pointed out that Buttigieg had gone on to say “especially for marginalized Americans.”

Actual quote here, in a reference to Trump's “great again” slogan: “That past that he is promising to return us to was never as great as advertised, especially for marginalized Americans.” pic.twitter.com/2hGcR7fhzI

Buttigieg’s claim is fairly banal; there are many examples of Americans facing oppression throughout history: slavery of Black Americans, genocide of indigenous peoples, nativist discrimination against immigrants, Jim Crow laws, internment of Japanese Americans, oppression of women, bans on marriage equality, and many more. We’re still grappling with the aftereffects of all of these.

Multiple Fox segments on the morning of May 7 ran with a cropped version of the Buttigieg quote, cutting it off before Buttigieg mentioned “marginalized Americans.”

Some Fox segments did air the full quote, though even those shows framed it around the smear.

This is a key thing, Fox doesn’t do news coverage with a conservative slant they do deliberately dishonest propaganda in order to pollute the news environment and try to obscure the actual stakes in politics. https://t.co/8OlGdMBE8o

Buttigieg is scheduled to take part in a Fox News town hall on May 19.