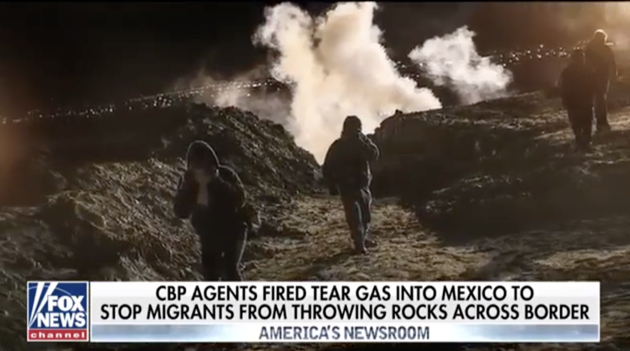 Update (1/3/19): This post has been updated with additional information.

Fox News anchors and hosts credulously repeated the Department of Homeland Security’s claim that U.S. Border Patrol agents fired tear gas at migrants attempting to cross the U.S.-Mexico border on January 1 only after some of them began throwing rocks. But an Associated Press photographer who was on the ground when the incident occurred said the migrants threw rocks after the agents fired the gas.

During the early morning hours of January 1, approximately 150 migrants, many of them wishing to seek asylum, attempted to cross the border near Tijuana, Mexico. The Associated Press reported, “Several migrants tried to climb the metal wall, prompting agents to fire the first volley of tear gas. When migrants approached the wall again, authorities fired a second round and then a third,” and “the migrants fled, screaming, crying and coughing.” A spokesperson for DHS described the migrants as a “violent mob” and said Border Patrol agents were being attacked with “projectiles.” But the AP story said a photographer for the wire service “saw rocks thrown only after U.S. agents fired the tear gas” and saw the “migrants put their hands up or behind their heads once they crossed the border as agents approached.” Additionally, Reuters reported that “U.S. officials said the group had attacked agents with projectiles but a Reuters witness did not see any migrants throwing rocks at U.S. agents.” The Mexican government has asked the U.S. to open an investigation into the incident.

Fox News largely treated DHS’ self-serving version of events as the authoritative account while reporting on the incident:

One exception to the Fox News stenography came later on January 2 during  Fox News’ broadcast of Shepard Smith Reporting. After guest host Trace Gallagher noted the AP report, Fox News reporter Anita Vogel said, “Now, the Border Patrol says the migrants threw the rocks first and agents responded with tear gas and pepper spray. But both the AP and Reuters photographers dispute that version of events -- the AP specifically saying rocks were thrown after the tear gas was fired. So, we don't really know what happened there.” (Vogel had earlier uncritically reported DHS’ claims during America’s Newsroom, saying, “Officials say a number of people in the crowd began throwing rocks over the fence at agents and officers and they responded with tear gas and pepper spray.”)

But that reporting didn’t stop further credulous repetition of DHS’ claims on Fox. Later that evening Fox Business host Lou Dobbs said that “Central American migrants tried to storm the southern border and assault border patrol officers” and that “in a statement, U.S. Customs Border Protection saying agents forced to use gas in response to those migrants throwing rocks at them.”

Fox’s Tomi Lahren also ran with it during the “Final Thoughts” segment of her Fox Nation show that evening, complete with the chyron “We will rock you.” Lahren said, “Some people hunt for unique rocks for their collections and others gather rocks to throw at Border Patrol agents and we call those folks illegal immigrants.” She went beyond what even DHS claimed, saying migrants “amassed south of the border wall … and started collecting rocks for what agents believe was a coordinated rock attack.”