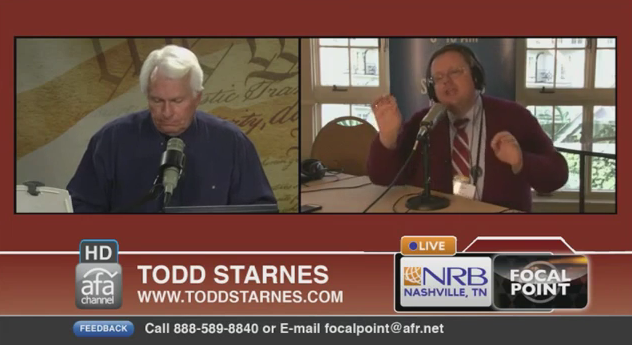 Fox News Radio reporter Todd Starnes effusively praised hate group spokesman Bryan Fischer of the American Family Association (AFA) as “one of the most intelligent talk show hosts in the country.” Fischer is notorious for making rabidly homophobic statements, including the claim that gay men caused the Holocaust.

During a February 24 appearance on American Family Radio's Focal Point with Bryan Fischer, Starnes and Fischer discussed a halted Federal Communications Commission (FCC) study that would have examined how well newsrooms are meeting the public's “critical information needs” on key public policy issues. Right-wing media hyped the study as an invasive survey that could lead to the federal government dictating news coverage.

While the FCC has backed off the study following public comment, Fischer said it “sounded” like the FCC is “reloading” and will proceed with the study anyway. In his discussion of the study, Fischer accused the Obama administration of trying to censor anti-gay views. Starnes agreed, suggesting that the Bible could soon be censored or outlawed. The Fox commentator praised Fischer's analysis of the FCC study as emblematic of why Fischer is “one of the most intelligent talk show hosts in the country” :

STARNES: You see, Bryan, this is why you are one of the most intelligent talk show hosts in the country because you parsed their words. You really have to do that when you're dealing with information coming from the Obama administration.

Starnes might be impressed with Fischer's purported intellectual acumen, but he's known primarily for making inflammatory and bigoted statements targeting the LGBT community. Fischer asserts that gay men created the Nazi Party and were thereby  “responsible for the Holocaust. ”  Fischer also believes that gay people are per se unqualified to hold public office, has linked homosexuality to pedophilia and bestiality, has asked whether the appropriate punishment for homosexuality is  “put[ting] them to death”  or simply jailing gay people, and has called for an  “Underground Railroad to deliver innocent children from same-sex households.”

Fischer's statements would seem to place him securely on the fringe, but he's long had warm words for Fox News. According to Fischer, Fox president Roger Ailes runs the network just like Jesus would. Fischer has publicly thanked the network for its  “very friendly”  treatment of the AFA, a Southern Poverty Law Center-designated anti-gay hate group.

As for Starnes, he's long been Fox's in-house champion for far-right hate groups. He has pleaded with listeners to donate money to groups like the Family Research Council (FRC) and the AFA and has dubbed the AFA  “a mainstream, evangelical, pro-family group.”