Co-hosts of Fox News’ The Five took a tweet by Rob Reiner out of context, claiming Reiner called “for ‘all out war’ to resist Trump,” ignoring Reiner’s quote was a reference to repeated instances where Fox News attempted to justify possible collusion between the Trump campaign and Russia. 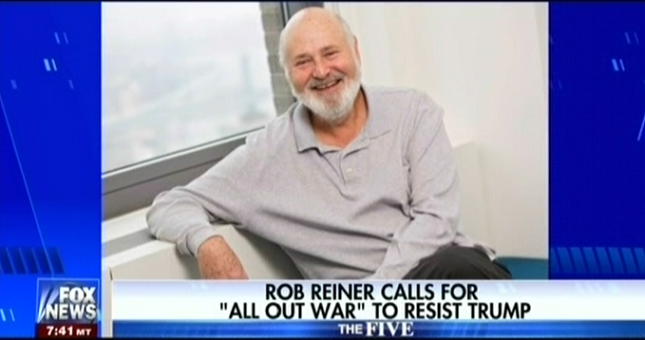 When Fox says that DT colluding with the enemy is not a crime, the fight to save Democracy is now an all out war. US-Stay strong. #Treason

Reiner’s tweet was a reference to prominent Fox News hosts repeatedly attempting to justify any collusion that may or may not have occurred between the Trump campaign and Russia during the presidential election. Fox News hosts Gregg Jarrett, Brit Hume and Sean Hannity have all attempted to justify potential collusion between the Trump campaign and Russia’s government, as has Fox News correspondent Geraldo Rivera.

But the co-hosts of The Five ignored this criticism of their colleagues and instead mocked Reiner’s claim without providing any context. From the June 26 edition of Fox News’ The Five:

KIMBERLY GUILFOYLE (CO-HOST): Hollywood is, of course doing what it can to help fuel the resistance movement. Actor and director Rob Reiner, best known as “Meathead” from All In The Family, is encouraging his fellow resisters on Twitter to fight an “all out war” to save democracy.

GREG GUTFELD (CO-HOST): And what exactly is an all out war from Rob Reiner? Is he going to load up his Prius with water balloons? He’s gonna write a really scathing piece in Huffington Post and then order a pie, and get all the crust in his beard?