Fox News is hyping a petition that calls for Congress to repeal the Environmental Protection Agency's authority to regulate greenhouse gases, on the grounds that global warming is a “hoax.” But while hyping 15,000 signatures gathered by a group that is in the business of misleading the public on climate science, Fox ignored that over 3 million comments have been submitted in favor of EPA's greenhouse gas regulations.

Fox News uncritically repeated the conservative Heartland Institute's declaration that the extensive science behind manmade climate change is just a “hoax.” The group's petition, which is being promoted by Republican Senator James Inhofe, tries to cast doubt on everything from the basic physics of the greenhouse effect to the fact that Arctic sea ice has hit record lows and sea levels are rising. Based on that misinformation, the petition argues that the EPA should allow businesses to continue spewing huge amounts of greenhouse gases into the air at no cost to the polluters.

Fox News did not give any background on the Heartland Institute, which has received significant industry funding and came under fire earlier this year for a billboard campaign associating acceptance of climate science with murderers. Heartland took down the billboard, but refused to apologize for its “experiment.”

The segment, on Fox News' Happening Now, also devoted uncritical airtime to several questionable claims about the impact of greenhouse gas regulations without speaking to the regulations' proponents. For instance, while Fox opened its report by saying that critics charge the rules would lead to higher gasoline prices, Politifact reported that greenhouse gas regulations would not necessarily lead to higher gasoline prices.

This unbalanced coverage is consistent with a previous Media Matters analysis, which found that Fox News hosted vastly more opponents of greenhouse gas regulations than proponents from December 2009 to April 2011: 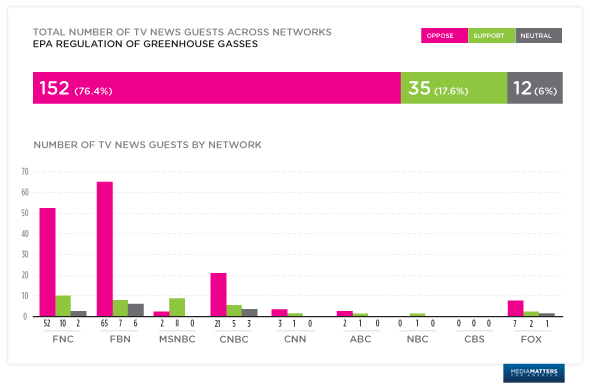