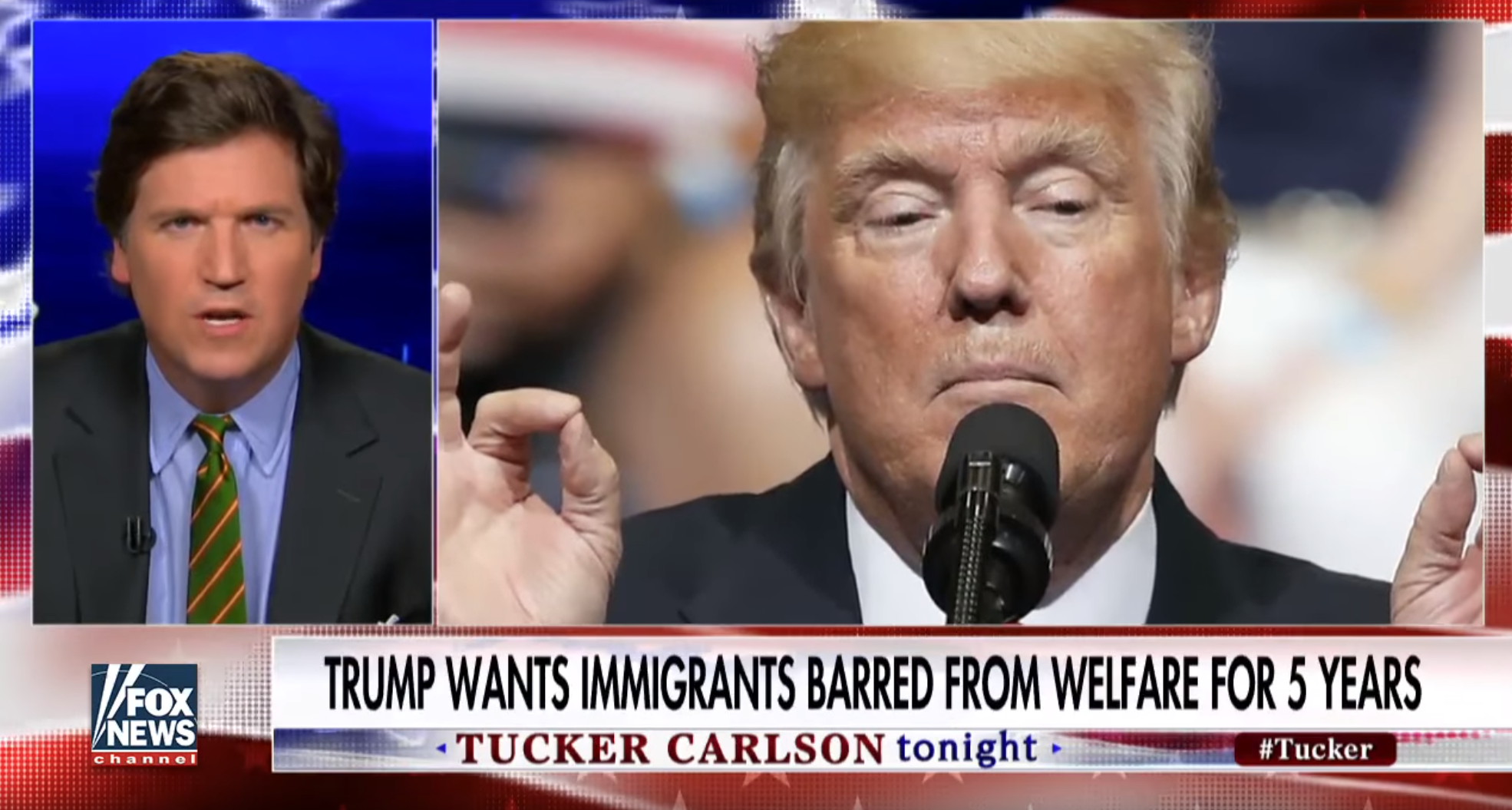 On Monday, the Trump administration announced plans to “penalize legal immigrants who rely on public programs, such as food stamps and government-subsidized housing,” in an effort to cut back on legal immigration. Fox News has long complained about immigrants -- legal or otherwise -- benefiting from welfare programs.

The New York Times says the rule will “provide the Trump administration a powerful new tool to narrow the demographic of people who come to live and work in the country.” The rule change comes as President Donald Trump is being criticized for promoting white supremacy talking points that revolve around a fear of white Americans being replaced by minority immigrants -- a theory that appears to have motivated a mass shooter to kill 22 people in El Paso, TX.

Fox News has long complained about both legal and undocumented immigrants receiving public benefits, insisting that benefits are being stolen from Americans.

Fox host Tucker Carlson applauded the Trump administration’s efforts to crack down on legal immigration through public charges laws, asserting that being on welfare is “not assimilation,” but “dependency.” Carlson asked why we would “import people from other countries on welfare,” calling the idea “insane.” [Tucker Carlson Tonight, 2/19/18]

Carlson complained about the perceived strain immigrants have on social programs, asking about what happens “when technology kills their jobs. ... So what do you do with hundreds of thousands of unemployed immigrant cab drivers? Do they all go on welfare?” [Tucker Carlson Tonight, 4/4/19]

Carlson claimed the “overwhelming majority of these immigrants are on welfare,” adding that “Democrats long ago discovered that welfare is a handy vote-buying scheme.” [Tucker Carlson Tonight, 12/5/18]

Fox host Sean Hannity complained that “even those with legal green cards are tapping into welfare programs,” claiming this “puts a burden on our criminal justice system, educational system and health care system.” Hannity added, “Where is the sympathy for the American people,” who “deserve to be protected first.” [Hannity, 12/5/18]

Carlson complained that half of “legal immigrants, the best kind,” are on welfare, pointing out that “that’s well above the native average.” [Tucker Carlson Tonight, 12/4/18]

Carlson emphasized that the majority of immigrants “aren’t coming from South Asia. They’re coming from Latin America,” adding that “we have a right to ask questions about that.” [Tucker Carlson Tonight, 1/11/18]