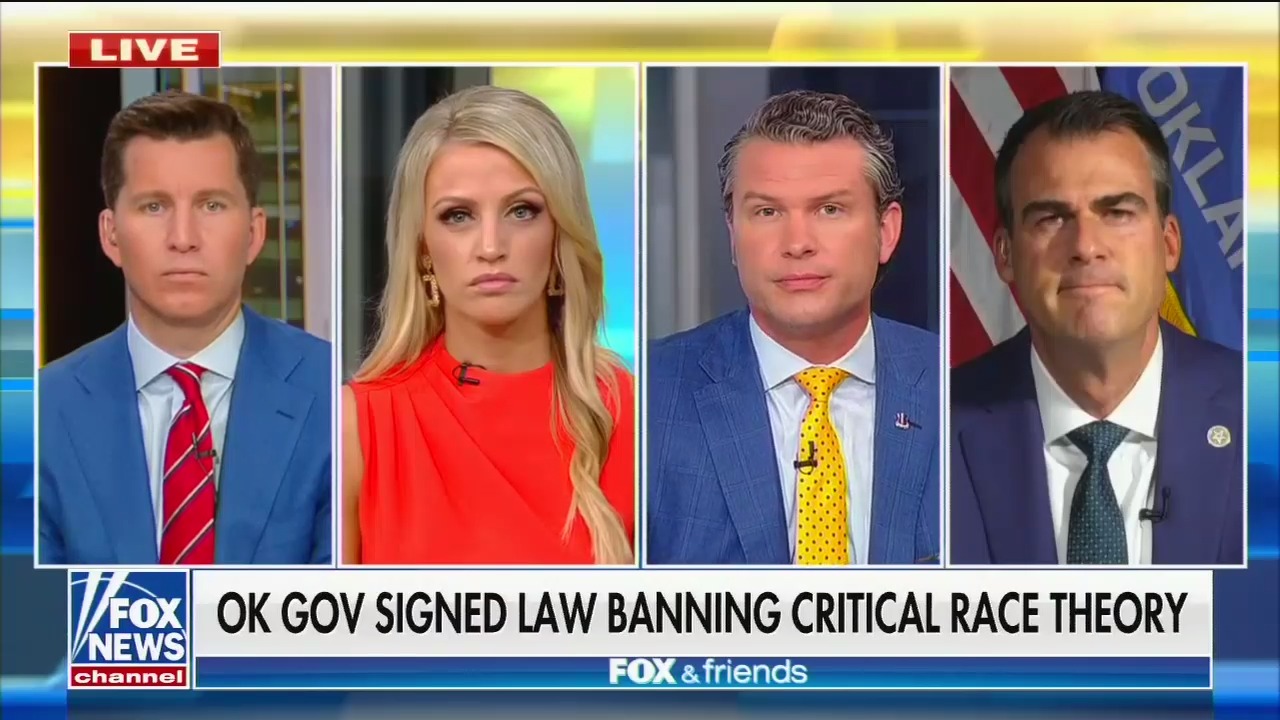 As part of a nationwide push to ban the supposed teaching of critical race theory in classrooms, Republican lawmakers are promoting bills which prohibit teaching students that one race is superior to another. But critical race theory makes no such claim, and now Fox News — which helped to manufacture this right-wing obsession — is amplifying this lie.

Critical race theory is an academic movement first developed in the 1970s which examines the pervasive impact of systemic racism on American society. The concept has become a familiar boogeyman in right-wing media, particularly on Fox, where it has been mentioned more than 550 times over the past year.

States including Idaho and Oklahoma have already passed laws ostensibly designed to ban the teaching of critical race theory in classrooms, and other states including New Hampshire are debating similar legislation. Many of these bills include wording which bans teaching students that “one race or sex is inherently superior to another race or sex,” yet they fail to adequately define critical race theory.

The “inherently superior” language contained in these bills appears to be modeled on former President Donald Trump’s now-rescinded executive order which restricted diversity training for federal government employees and contractors. This wording enables right-wing proponents of these laws to suggest that those criticizing these laws support teaching students blatantly racist ideas of racial superiority.

The vague language included in these bills is also purposely designed to stifle conversations about racism in U.S. society, not just critical race theory. Writing in The Atlantic, Adam Harris described the controversy surrounding these state bills:

“The vagueness of the language is really the point,” Leah Cohen, an organizer with Granite State Progress, a liberal nonprofit based in Concord, told me. “With this really broad brushstroke, we anticipate that that will be used more to censor conversations about race and equity.”

Fox, meanwhile, has helped to promote these bills by highlighting the “inherently superior” language as evidence that the bills are uncontroversial and simply seek to prevent teachers from disseminating racist ideas.

On May 16, Fox and Friends Weekend hosted Oklahoma Gov. Kevin Stitt to respond to criticism he had received for recently signing an anti-critical race theory bill into law. Stitt claimed that “the bill that we signed, if you actually read it, it simply says that we’re not going to say in our schools in Oklahoma that one race is superior to another race.” Co-host Carley Shimkus agreed, arguing, “I read the bill and it’s one of the most inclusive things I’ve ever read in my life. It’s a white supremacist’s worst nightmare. I can’t understand how anybody would have a problem with what you just signed into law.”

Shimkus had made the same claim just a few days earlier on America’s Newsroom, when she referred to the Oklahoma bill as “one of the most inclusive things that I’ve ever read in my life.” Shimkus continued, “It says that teachers are not allowed to teach students that one race is superior to another. ... It should be the least controversial thing under the sun.”

On May 12, Fox anchor Harris Faulkner asked talk radio host Jason Rantz about criticism of the Oklahoma bill. Faulkner noted that the bill “prohibits public schools and universities from teaching that, quote unquote, ‘one race or sex is inherently superior to another.’” Rantz responded by claiming, “That’s not controversial at all. That it is controversial is more instructive about the person who believes it’s controversial.”

Fox’s promotion of this lie is the latest effort in a year-long campaign to distort the public’s understanding of critical race theory. In fact, Fox and frequent network guest and right-wing activist Christopher Rufo helped to inspire these state bills.

Trump's executive order was likely created in response to a Tucker Carlson Tonight segment Trump had seen in which Rufo warned about critical race theory in the federal government. Rufo has been the single most prominent opponent of critical race theory in right-wing media and has appeared on Fox News programming at least 34 times since 2019.

Rufo later took credit for inspiring Trump’s executive order, and he has since praised some of the state legislation designed to ban critical race theory in schools. In an interview with The Atlantic, Rufo claimed that he has supported state legislators looking to pass anti-critical race theory bills. Rufo was a visiting fellow at the Heritage Foundation, whose political arm was recently exposed for its coordination of another right-wing obsession across state legislatures -- voter suppression bills.

The lie that critical race theory teaches that one race is superior to another is a right-wing creation that has nothing to do with the academic movement. But Fox has already spent months distorting the concept, and that effort won’t stop now.