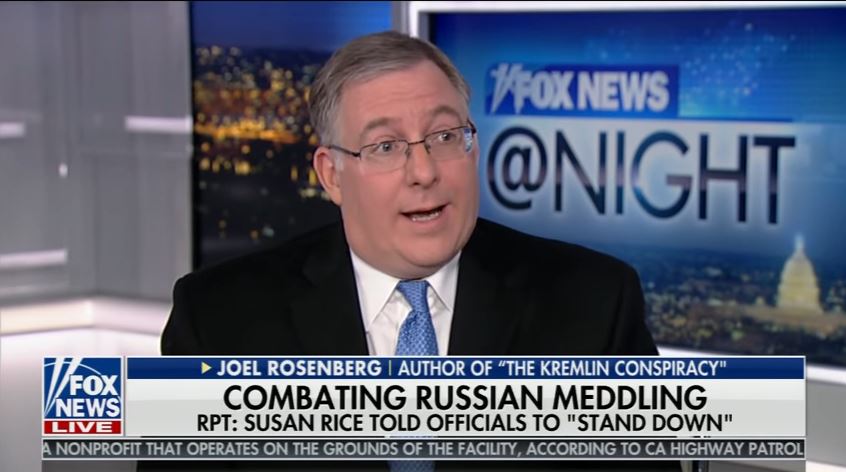 Fox News has repeatedly aired the Russia commentary of the author Joel C. Rosenberg over the past few weeks, credentialing him as a “Russia expert” and pointing to his recent bestseller, The Kremlin Conspiracy. In an appearance on the network and in packaged reports, hosts and contributors of the network’s putative hard news programs have described Rosenberg as “the author of a very important book,” a “New York Times bestselling author and author of the brand new book,” and “the author of the bestselling book The Kremlin Conspiracy."

There’s just one problem: The Kremlin Conspiracy isn’t, as the title might imply to those hearing of it from Fox personalities, a work of history, or political analysis, or journalism. It’s a political thriller.

Rosenberg is a former Republican political operative who used the right-wing connections he established working for radio host Rush Limbaugh, among others, to carve out a niche writing conservative fiction that his website describes as “ripped from tomorrow’s headlines.” The Twelfth Imam series, for example, is about a CIA operative’s quest to “disrupt Iran’s nuclear weapons program” as an “obscure religious cleric is suddenly hailed throughout the region as the Islamic messiah known as the Mahdi or the Twelfth Imam.”

Rosenberg, who believes that we are currently in the biblical End Times and that the rapture and second coming of Jesus Christ are quickly approaching, is also the author of “nonfiction” books that apply biblical prophecy to current events. An evangelical Christian of Jewish ancestry who celebrates that “Jews are turning to Jesus in record numbers” and “getting excited about His Second Coming,” Rosenberg is also the founder of The Joshua Fund, a nonprofit group that seeks to “mobilize Christians to ‘bless Israel and her neighbors in the name of Jesus.’”

With an American president distracted by growing tensions in North Korea and Iran, an ominous new threat is emerging in Moscow. A czar is rising in the Kremlin, a Russian president feverishly consolidating power, silencing his opposition, and plotting a brazen and lightning-fast military strike that could rupture the NATO alliance and bring Washington and Moscow to the brink of nuclear war. But in his blind spot is the former U.S. Secret Service agent, Marcus Ryker, trained to protect but ready to kill to save his country.

The fact that The Kremlin Conspiracy is a novel is rarely addressed when Fox features Rosenberg’s Russia commentary.

In packaged reports that aired Monday night on Special Report and Fox News @ Night, Fox White House Correspondent Kevin Corke referenced Rosenberg’s book and aired an image of its cover. In both cases, he then aired a clip of Rosenberg -- described in the caption as a “Russia expert” -- commenting on the U.S. decision to expel Russian diplomats in response to that country’s alleged involvement in the poisoning of a former Russian spy in the United Kingdom earlier this month by calling for an even harsher response. 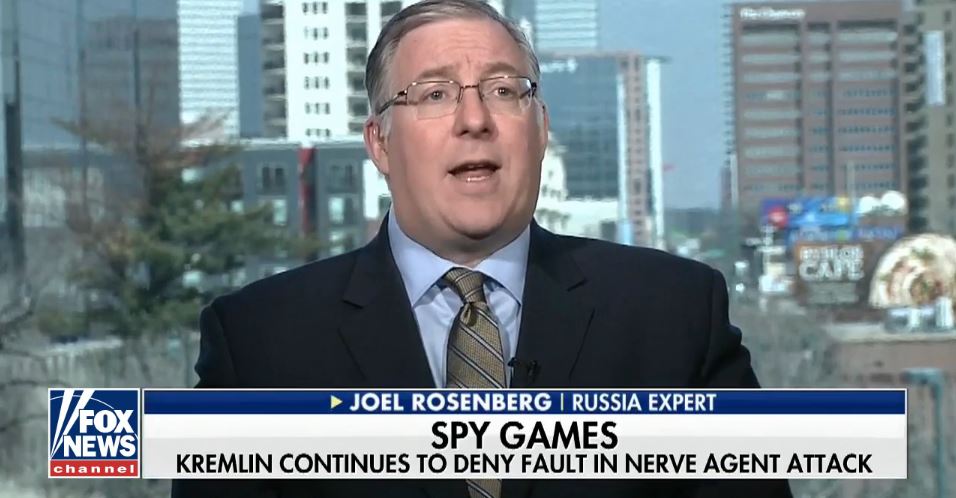 In neither case did Corke note that The Kremlin Conspiracy is a work of fiction (though small text on the cover he aired does describe it as “a novel”).

Likewise, when Fox News @ Night host Shannon Bream hosted Rosenberg to discuss Russia earlier this month, she introduced him as “New York Times bestselling author and author of the brand new book The Kremlin Conspiracy.” It was Rosenberg himself who mentioned in passing that the work was a novel, as he drew comparisons between its fictional antagonist and Russian President Vladimir Putin.

“And you know, my fictional dictator takes us as weakness,” he commented. “There was a quote by Vladimir Lenin, years ago. And he said, ‘Probe with bayonets -- if you find mush, push. If you find steel, stop.’ Putin is probing us for weaknesses, in cyber, in invading countries, in taking out dissidence. And under Obama, mush. Will he find steel in President Trump? That's what we need.” Bream responded by praising Rosenberg’s book, saying, “Once you pick it up, you can’t put it down.”

Rosenberg has also written and spoken extensively about the various “signs” indicating the second coming of Jesus Christ may be imminent (including the “supersign” that was the “rebirth of Israel in 1948”).

Fox has repeatedly hosted Rosenberg, either credentialing him as a national security expert or bringing him on to discuss whether particular events -- such as the civil war in Syria -- indicate the approach of the biblical End of Days. He was a particular favorite of former Fox host Glenn Beck, not only appearing on his TV and radio shows but also featuring prominently in Beck’s documentary Understanding the Holy Land, which gives a history of Israel through the lens of its role in End Times prophecies.

In one 2011 appearance, Bream introduced Rosenberg by saying of an alleged plot by an Iranian-American man to assassinate a Saudi diplomat: “The Iranian plot FBI director Mueller has talked about this week also reads like the pages of a soon-to-be-released novel by an author that some are calling a ‘modern-day Nostradamus.’ Joel Rosenberg's new book, The Tehran Initiative, bears an eerie, uncanny resemblance to current events. And it isn't the first time he's written fiction that's foreshadowed the future -- it's a special gift I think he has.”