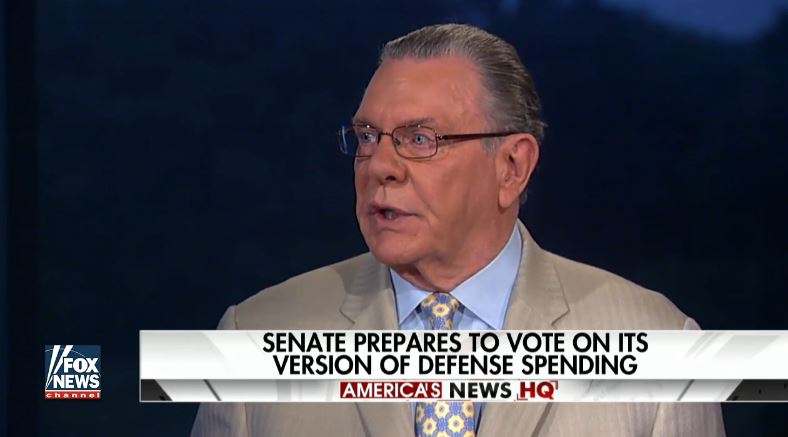 Retired Gen. John “Jack” Keane, one of Fox News’ go-to military analysts, has repeatedly hammered home a message to viewers: The United States military needs more money to buy ships and vehicles. Left unsaid is that Keane is on the board of directors for General Dynamics, a defense contractor that receives significant revenue building those combat machines for the military.

General Dynamics is a U.S.-based defense contractor that received roughly $19.7 billion in defense industry revenue in 2016 (sixth overall). According to the company’s most recent proxy statement, Keane received $257,884 in compensation (including “stock awards”) in 2016. The company produces ground vehicles such as the Stryker combat vehicle and Abrams tank, and it builds numerous naval ships through Bath Iron Works.

General Dynamics stated in its 2016 annual report that “60 percent of our consolidated revenue in 2016 was from the U.S. government” and warned that “decreases in U.S. government defense spending or changes in spending allocation or priorities could result in one or more of our programs being reduced, delayed or terminated, which could impact our financial performance.”

Keane frequently uses his Fox News gig to push for increased defense spending without disclosing his role with General Dynamics. Here are just a few of those appearances just this year:

Keane appeared on the August 29 edition of Mornings with Maria and was asked about military readiness. He said the country is militarily ready, but the Chinese, Russians, and Iranians “know that our military capability has been significantly degraded, because we have not been invested in it for a number of years.” Guest host Dagen McDowell responded by stating that it falls on Congress to increase defense spending.

Keane appeared on a July 23 segment on America’s News HQ in which he advocated increased military spending and said the military needs to buy “new equipment.” Keane then specifically mentioned that there are “five ships” in the House budget that should be funded -- a reference to a fiscal 2018 proposal to add, as Reuters noted, an Arleigh Burke class destroyer "made by General Dynamics Corp and Huntington Ingalls Industries Inc and a total of three Littoral Combat Ships built by Lockheed Martin and Australia’s Austal Ltd.”

JACK KEANE: What has to take place -- we need to put money into operation and maintenance accounts so that we can train properly, train our pilots, we can keep our equipment up. That money has to be in there and it is. That’s number one. Then we have to get future readiness, which is buying new equipment. That’s future readiness. There’s five ships, for example, in the House’s budget. There’s missile defense as well. That has got to be there.

On the July 17 edition of Special Report with Bret Baier, Keane said in a taped report by correspondent Peter Doocy that “we don't have enough ships. We don't have enough tanks. We don’t have enough soldiers. And now we’re spending money on studies for climate change around the world in the Department of Defense. It makes no sense whatsoever.”

During a June 27 appearance on Fox Business’ Mornings with Maria, Keane said that President Donald Trump's budget “is only 3 percent above the forecasted budget” that President Barack Obama "had recommended, and that is totally inadequate.”

FoxNews.com quoted Keane in a February 28 article stating of a proposed military budget: “I think more money is absolutely necessary." He added: "Our viewers need to understand how seriously depleted our military has been over the past couple of years – we don’t have the credible deterrent we used to have.”

He has been a frequent offender over the years when it comes to transparency. Media Matters noted in April that Keane regularly appeared on Fox to praise President Trump for launching Tomahawk cruise missiles against Syria without disclosing that General Dynamics develops technology for launching those weapons.

He recently praised Trump for his decision to increase troops in Afghanistan and for the way he delivered the message, claiming that the country “finally got a commander-in-chief who speaks honestly.” General Dynamics has received numerous military contracts related to Afghanistan.