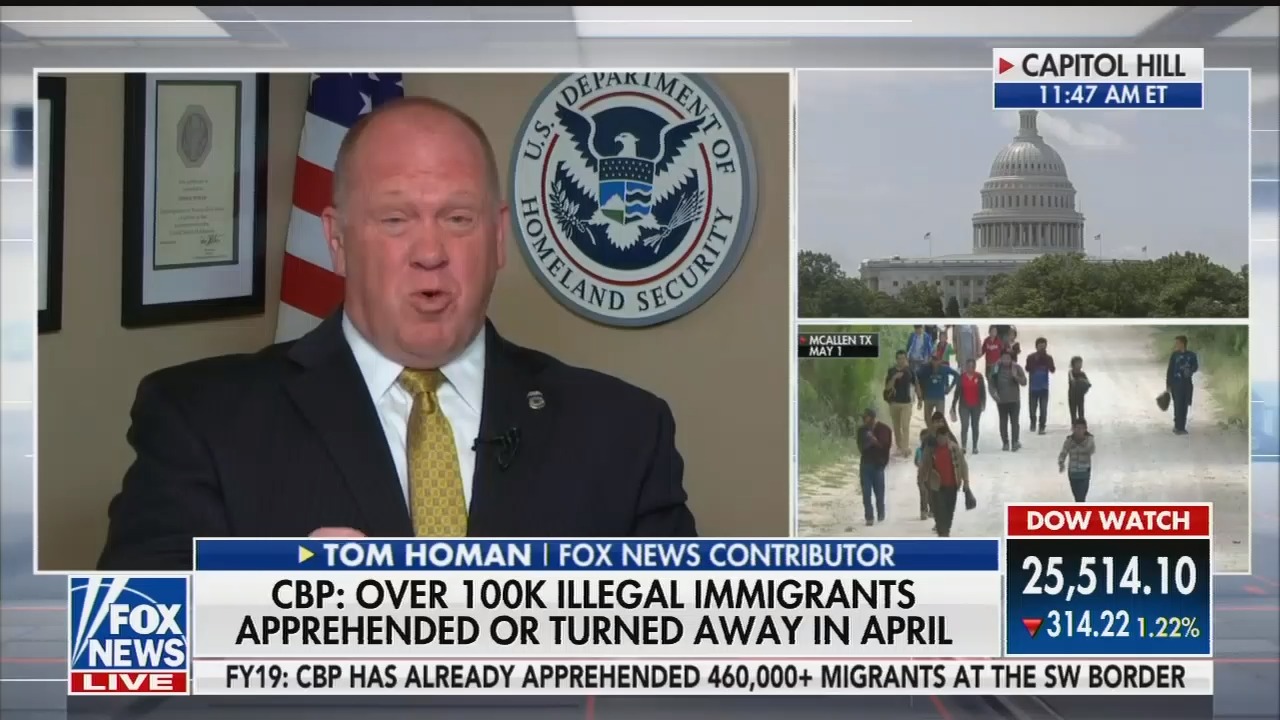 Fox News contributor and former acting ICE Director Tom Homan, in an effort to inflate problems at the southern border, claimed “86%, almost 9 out of 10 families, aren't making it to court” for their asylum hearings, citing congressional testimony.

But the testimony Homan appears to be referring to actually showed that most such families do show up for their court cases -- which lines up with studies and results from an Obama administration program where the vast majority of families over a period of 10 years attended their hearings. The numbers Homan gave referred only to a pilot program launched by the Trump administration in late 2018.

On May 8, Acting Executive Associate ICE Director Nathalie Asher testified to the Senate Judiciary Committee that 87.5 percent of removal orders for cases in a limited Department of Justice pilot program to expedite family asylum cases within a year “were issued in absentia” when the persons didn’t appear for their cases. However, immigration lawyers say that this Trump administration pilot program could violate immigrants’ due process rights.

Asher’s testimony also stated that in fiscal year 2018, just 27.4% of family units failed to appear for their court dates -- far less than the “almost 9 out of 10 families” Homan claimed. Asher even admitted that the traditional program for these families “is effective in ensuring that its vetted participants show up to specified hearings.”

Other data also show that a sizeable majority of immigrants in recent years who are not detained attend their immigration court proceedings. Family units applying for asylum that participated in an Obama administration pilot program had nearly perfect attendance for their ICE check-ins and court hearings -- but the Trump administration canceled that program. And multiple studies and analyses have shown that the rate for several categories of asylum seekers had court hearing attendance rates of over 90%. Homan, who regularly appears on Fox to misinform on immigration and advocate for harsh measures against asylum seekers, has the numbers completely backwards.

From the May 10 edition of Fox News’ America’s Newsroom:

BILL HEMMER (ANCHOR): So, the situation on the border apparently getting worse. More than 100,000 illegal immigrants were either apprehended or turned away at the southern border in one month, in the month of April. Tom Homan, retired ICE director and a Fox News contributor. Sir, thanks for coming back here. Administration's looking for some more money, let me get to that in a moment. There was a big hearing yesterday on the Hill. We had a member of the Border Patrol on out air last hour. He's just saying that Congress doesn't care because Congress isn't getting it done. Now you see the numbers from April and they tell you what?

TOM HOMAN (FOX NEWS CONTRIBUTOR): Well look, I've been saying for months Congress doesn't care. Look, I think their resistance to Trump, they want to see -- they want to see this president fail on his number one campaign promise. I've said it many times, they're putting their hatred of this president above their responsibilities to secure this border. They can't be ignorant to what's happening. All you got to do is watch the videos, watch the numbers. The borders -- I've done this 34 years. This is unprecedented. I've never seen it this bad on the border. And they're sitting there watching the parade go by. Nothing is happening, and it's terrible. The morale of the Border Patrol is going downhill. More people are being released. As of yesterday's testimony, 86%, almost 9 out of 10 families, aren't making it to court. They don't show up. They become a fugitive and they hide in the United States waiting for the next DACA or waiting for the next amnesty. It's terrible, it's out of control. Worst I've ever seen it in my entire career.