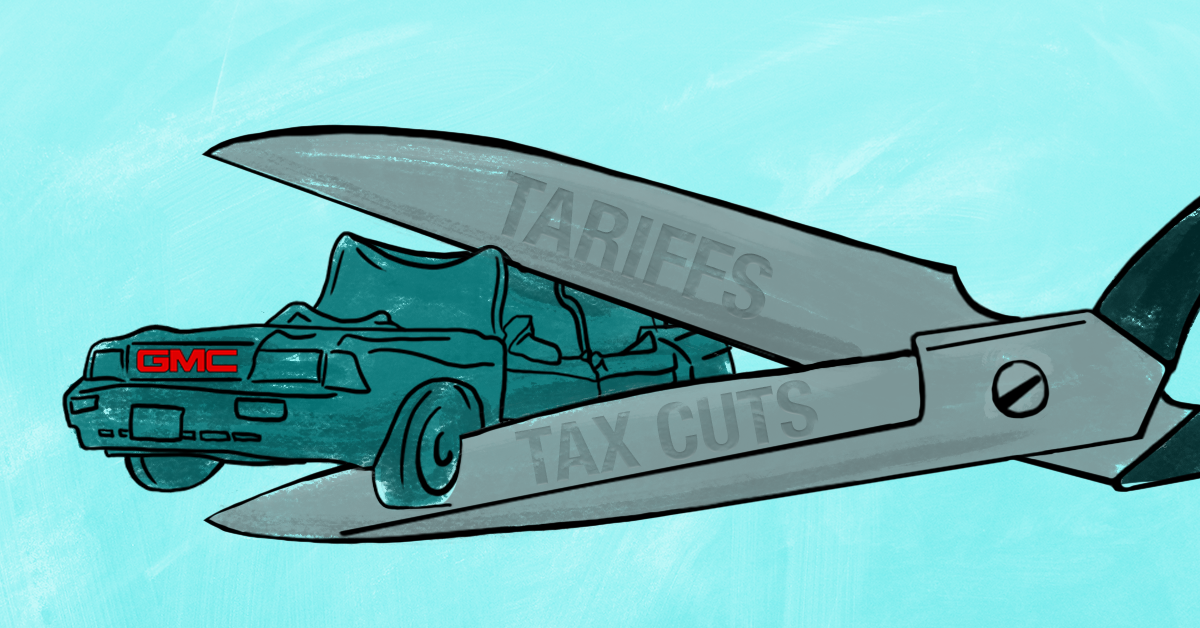 General Motors announced plans earlier this week to close five plants in North America, including ones in Maryland, Michigan, and Ohio, and to lay off an estimated 14,000 workers. Fox News personalities reacted to the announcement with surprise and anger, but doubled down on their defenses of President Donald Trump’s tariffs and tax policies despite economists warning that these policies would hurt the workers and the economy.

Fox hosts were briefly baffled at the news that GM will be closing five of its plants, but hurried to spin the news to absolve Trump of any blame. Fox & Friends co-host Brian Kilmeade complained that GM “got a huge corporate tax cut” because “the thought was that the American industry would start bringing industry home.” Fox Business host Charles Payne quickly glossed over the impact of Trump’s tariffs before arguing that the layoffs are “not a bad thing” because “this is about demand.” Fox News host Neil Cavuto offered no pushback to Rep. Steve Scalise’s (R-LA) claim that “dramatic tax cuts … are now bringing jobs back to this country.” And Fox Business panelist Lindsey Bell offered the weirdly optimistic justification that GM employees are “being laid off into this robust job market” with “7 million job openings,” making it “a better environment to be laid off in.”

GM’s plant closures can be attributed to many factors, but it is clear that GOP tax cuts and Trump’s reckless trade wars have played a significant role. Though Trump relentlessly campaigned on saving American jobs, economists warned that the GOP tax plan “encourages even more shifting of operations and jobs overseas”; other experts predicted that Trump's trade policies would also cost American jobs. In June, GM said that Trump’s trade war with China could lead to “less investment, fewer jobs, and lower wages for our employees.” Now, according to NBC News, “GM has estimated those tariffs have cost the company hundreds of millions of dollars,” while “Ford - which announced last month it would be making an unspecified number of cuts as part of a ‘redesign’ of the company — says the tariffs have cost the company $1 billion so far.”

But Fox hosts and guests still used GM’s announcement as an opportunity to double down on their support of Trump’s economic policies. A Fox Business panel pushed for even more tax cuts to passed in the lame duck session before Democrats take control of the House in January. Fox guest Peter Morici claimed that the Trump tariffs “had very little effect on General Motors” and argued that “Mr. Trump has to get a lot tougher on China.” Fox’s Laura Ingraham argued that “until China starts behaving like a global trading partner in a truly free and open market, we shouldn’t be doing any business with China” and asserted, “We should treat them as we treated the Soviet Union.” Ingraham went on to praise Trump’s policies, saying that he is doing “exactly what he should be doing.” On her prime-time show, Fox Business host Trish Regan claimed that Trump “is making the right move” because “he has taken on the Chinese and their tariff system in a way that previous presidents never did.”

When Trump’s tax cut and tariffs were first announced, Fox personalities praised the tax cuts and downplayed the president’s decision to start a trade war with China, despite numerous expert warnings of the detrimental impact of these policies.

As the tax cuts debate continued in 2017, Kilmeade speculated in August that Democrats were opposed to the cuts because they were afraid that “the economy will grow at such a rate it will be impossible for them to win an election.” In September 2017, Fox host Sean Hannity cheered the tax cut on his radio show, saying that it would lead to wealthy people “spending money and buying boats” which “keeps people working” and “stimulate the economy and build the factories in Michigan, Wisconsin, Pennsylvania, and Ohio.” (Two of the GM factories being closed are in Michigan and Ohio.) In October 2017, Fox & Friends co-host Ainsley Earhardt denied that the GOP tax cuts would mostly benefit the wealthy, arguing that “if you read the tax plan, that’s not at all what it says.” (According to experts, the tax cut “would deliver 80 percent of its benefits to the top 1 percent” by 2027.)

Similarly, on the issue of Trump’s decision to impose tariffs on various imports, many Fox hosts and contributors speculated if they would ever be implemented and downplayed their negative effects. In April, Fox Business host Stuart Varney brushed off concerns over tariffs as “an emotional response to the words ‘trade war.’” Fox & Friends’ Steve Doocy also minimized the effects of Trump’s trade war, claiming “there are no tariffs” and that “it’s all a suggestion, it’s all a negotiation.” Fox contributor Tammy Bruce asserted that Trump’s trade war with China “will, in the end because of his ability to negotiate, work out well.” Hannity confidently claimed that he didn’t “think there’s ever going to be a trade war,” while Outnumbered host Dagen McDowell said that we don’t know if these “tariffs will ever be put in place.” Fox’s Geraldo Rivera likened China’s retaliatory tariffs to “chump change” and expressed confusion about why the market responded “so emotionally.”

These callous remarks about Trump’s trade war came despite experts’ conclusion that the U.S. “consumers would bear the brunt of the immediate damage,” while “the impact on Chinese consumers, by contrast, would be modest.” A more recent study concluded that due to Trump’s trade policies, “in 2019, each US household would lose the equivalent of $2,357.” But it is clear that Fox cares more about cheering on Trump's irresponsible economic policies than covering their disastrous effects on American workers.